Holidays came early for the team members of the Knoll Gas-TORCO Race Fuels, Inc.
Funny Car; driver and team owner Mike Ashley treated every member of his team to
a three-day licensing experience at Frank Hawley's Drag Racing School in
Gainesville, Fla. Every person now working on Ashley's car is licensed to drive
either Super Comp or Super Gas in NHRA competition.


"These guys worked so hard this year, and were incredibly successful in a
short amount of time. I wanted to say thank you in a special way, and, since
they all have a passion for racing, I don't think there was a better choice,"
Ashley said.

Troy Coughlin was uninjured when his turbocharged Pontiac made contact with the wall during testing yesterday at South Georgia Motorsports Park in Valdosta, Ga. 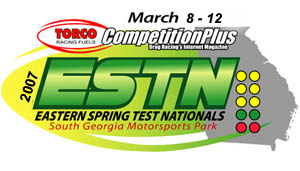 In an effort to give attending drivers as much publicity as possible, the
Eastern Spring Test Nationals presented by Torco's CompetitionPlus.com is open
to pre-entry registration. The seventh annual event will be held at South Georgia
Motorsports Park in Valdosta, Ga., during the weekend of March 8 - 14, which is
the week prior to the NHRA MAC Tools Gatornationals and two weeks for the IHRA
Texas Nationals in San Antonio, Texas. 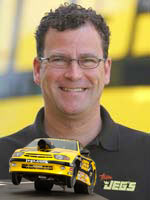 When Team JEGS driver John Coughlin reflects on the recently completed 2006
racing season, he will recall fondly a number of successes, both on and off the
race track. As a racer, Coughlin once again did double-duty, driving his Super
Stock Cavalier and Super Comp dragster at NHRA events across the eastern U.S.
One of the highlights of the season was a late-round finish at his home event,
the Pontiac Performance Nationals at National Trail Raceway in Columbus. Like
his younger brother, Jeg, John also participated in several big money E.T.
bracket races and enjoyed a fair amount of success, including a $5,000 victory
at Farmington Dragway. He also reached the late rounds of a $20,000 to win event
at Atco Dragway and posted a semifinal finish at the Drag Race Results Bracket
Series event at National Trail Raceway.
“I got off to a mediocre start this year in Super Stock and Super Comp, but
I started to win some rounds when we began bracket racing,” said Coughlin. “I
hadn't bracket raced much over the last few years so I had almost forgotten how
much fun it is. I think the highlight of the year was the Farmington race in
May. I won $5,000 the first night and Jeggie and I both won a lot of rounds over
the weekend. I also enjoyed the Drag Race Results race here in Columbus. At that
race, you are allowed to enter two cars, so I drove my dragster and Jeg’s Chevy
II. I ended up going to the quarterfinals in the Chevy II and the semifinals in
the dragster. That was a busy day.

Wed, 2006-12-20 07:34
Over the past 40 years motorsports artist Ron Burton has both loved and lived
racing.  His work is seen throughout the Indianapolis Motor Speedway Museum,
Speedway Hotel, Union Jack's Pub in the town of Speedway and on the walls of
some of the most famous people and companies involved in the world of
motorsports.

“Participants may use this event, the inaugural Winter Open, as an
in- or out-of-division claim,” said IHRA director of competition and technical
services Mike Baker. “By doing so, it gives our competitors the ultimate in
flexibility when planning their 2007 racing
schedule.”

Tue, 2006-12-19 11:14
The popular test session hosted by South Georgia Motorsports Park and leading
Internet drag racing publication Torco’s CompetitionPlus.com, will return for
the seventh season during the week of March 8 – 12. This event has been hosted
in the years prior by Darlington Dragway and Virginia Motorsports Park found a
new home last year at SGMP with unparalleled success. Over 110 professional
entries rolled through the gates for the event.
“We had a lot of fun doing this,” event
coordinator Bobby Bennett said. “Shad Dean and the gang at South Georgia
Motorsports Park worked their fingers to the bone providing a great place for
the professionals to test. I am honored to have Torco’s CompetitionPlus.com
aligned with such a professional group.”

Tue, 2006-12-19 11:12
JEGS Automotive Inc, an industry leader in high-performance mail order parts,
has become a sponsor of the popular SpeedFreaks television and radio shows. JEGS
will be featured prominently on the set of the upcoming SpeedFreaks show, which
will air on ESPN2, as well as the nationally-syndicated SpeedFreaks radio
program.  The familiar yellow and black colors of JEGS will also seen throughout
their popular website (http://www.speedfreaks.tv/) where fans can
go to download their favorite media, video, Podcasts and more.
"I remember doing the SpeedFreaks show when they first got started and it's
been fun watching them grow," three-time NHRA champion Jeg Coughlin said. "The
upcoming shows on ESPN2 will be exciting to be a part of and we're psyched about
reaching all of the markets they hit on Sunday nights with their radio
show."

Where: Denver
Police Department, District 3 station. (Located at I-25 and South
University)

FORCE TO SPEAK AT AARWBA CEREMONY