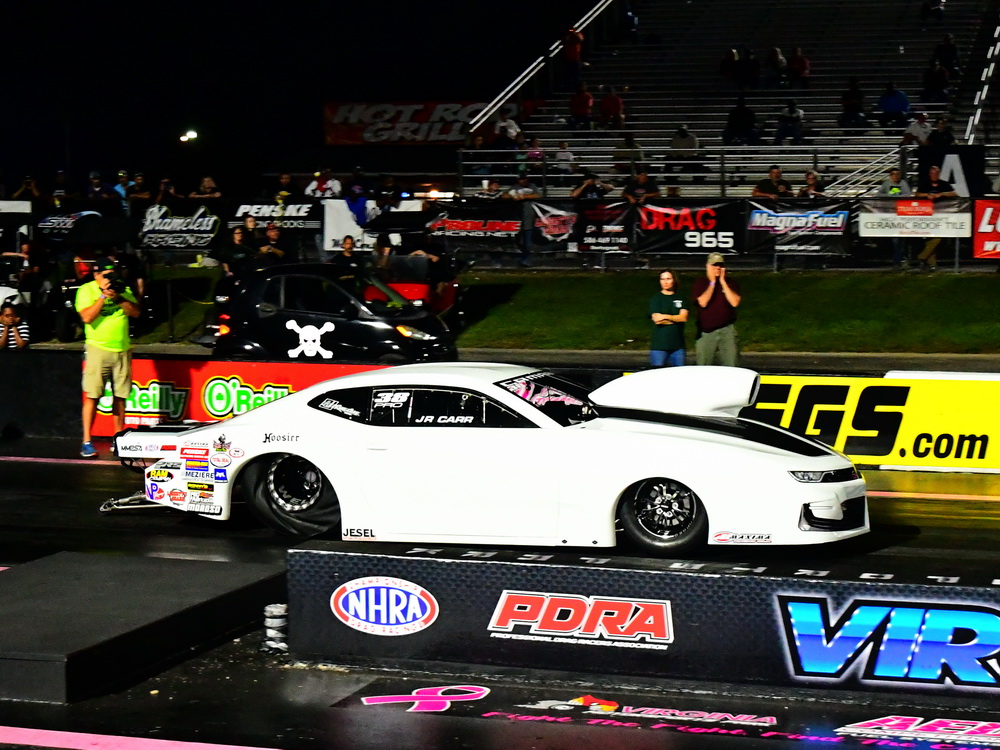 CAR SEALS THE DEAL - Mountain Motor Pro Stock veteran JR Carr entered the 2020 season without a low qualifier award or event win in PDRA Extreme Pro Stock competition. He picked up both accomplishments earlier this season, then added one of each again at the World Finals. He won his second PDRA “660 Man” trophy in an unceremonious final round, clicking off a 4.394-second pass at 161.52 mph in his Frank Gugliotta-tuned ’20 Camaro while Dwayne Rice’s ’18 Camaro sat silent just past the 60-foot mark.

“I was underwhelmed at first when I was shutting the car off,” Carr said. “I had never been through a pass where the other car was still on the track. That just got in my head. Then I calmed down and thought, 'It's a test pass.' I was trying to really shallow stage and I put it on the wood and [the stage bulb] wouldn't stay lit. Finally I just moved in, staged and the car went left and I shut it down. It was not how I wanted to win. But a win's a win. We'll take it. We had to be there to have that opportunity and it is what it is.”

“We did run good,” Carr said. “We ran really good numbers. The car's consistent and I drove pretty good. My team's been flawless. I'm so thankful for all of them and all the sponsors and guys that give us the good stuff. We couldn't do it without them. I'm just the lucky guy who gets to drive it.”

WHAT'S LEFT - In the PDRA’s other professional and sportsman classes, the following drivers are left in competition: 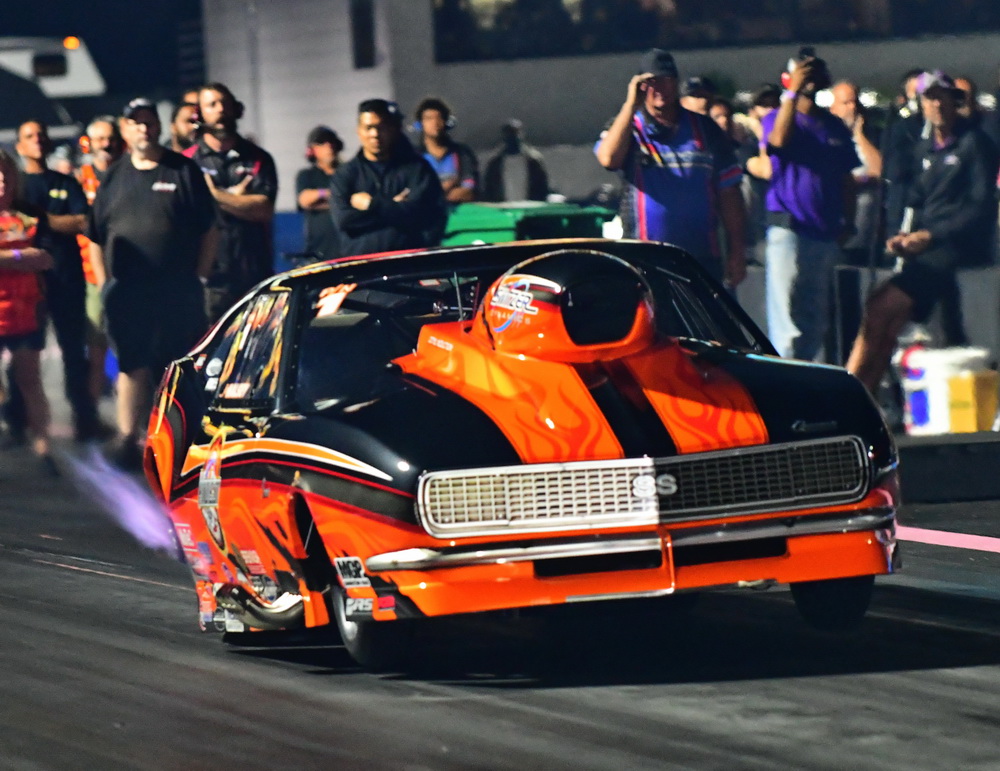 MAKING HIS MARK - Jim Halsey entered the weekend exactly 100 points behind points leader and two-time Pro Nitrous world champion Tommy Franklin. He took a nine-point chunk out of that deficit by qualifying No. 1 with his 3.638 at 208.46 in his Brandon Switzer-tuned, Fulton-powered ’68 Camaro. Franklin, who typically qualifies in the top three, ended up No. 10 after Friday’s two qualifying sessions.

“It's definitely all on the line,” Halsey said. “We weren't trying to run super-fast or anything like that. We missed the first session by a little bit and shook the tires. It ran what it should've ran. Now it’s all about winning the race. It's between me and Tommy. I just want to thank Michael, Eric, Cathy, Brandon, Melissa, the whole team. They deserve it more than I do.”

Chris Rini fired off a 3.665 at 205.72 in his Buck-powered ATI Performance Products ’69 Camaro to qualify No. 2 in the 17-car field. Lizzy Musi, making her third PDRA appearance of the season after a busy summer filming episodes of Street Outlaws, qualified third in Frank Brandao’s Musi-powered Edelbrock/Lucas Oil “King Kong 7” ’18 Dodge Dart with a 3.697 at 206.07 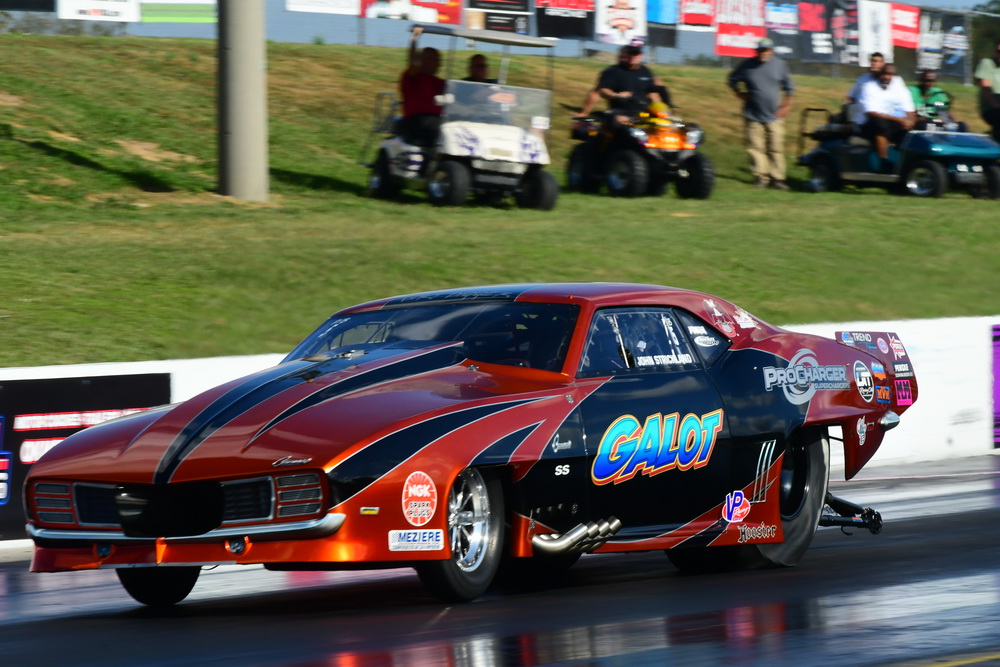 ONE-TWO PUNCH - The top two drivers in Pro Boost points ended qualifying in the top two qualifying spots as well, as John Strickland and Jason Harris were the two quickest drivers in the 15-car field. Strickland led both sessions in his ProCharger-boosted, Proline-powered GALOT Motorsports ’69 Camaro, with his 3.648 at 205.01 in the second and final session leading the way.

“Well, seeing how we're less than a hundred points ahead of Jason, that will definitely help us out with [the championship chase],” Strickland said. “We just need to maintain and last a round longer than Jason. I'm excited about running for a championship. I'd love to have a championship, just like everybody else out here racing. I think it would say a lot about teaming up with Proline and all the guys we team up with to get us here. It's all about all these guys working hard. It would be good for them. They did it last year with Kevin [Rivenbark]. If we could do it again this year, it would say a lot about the team.” 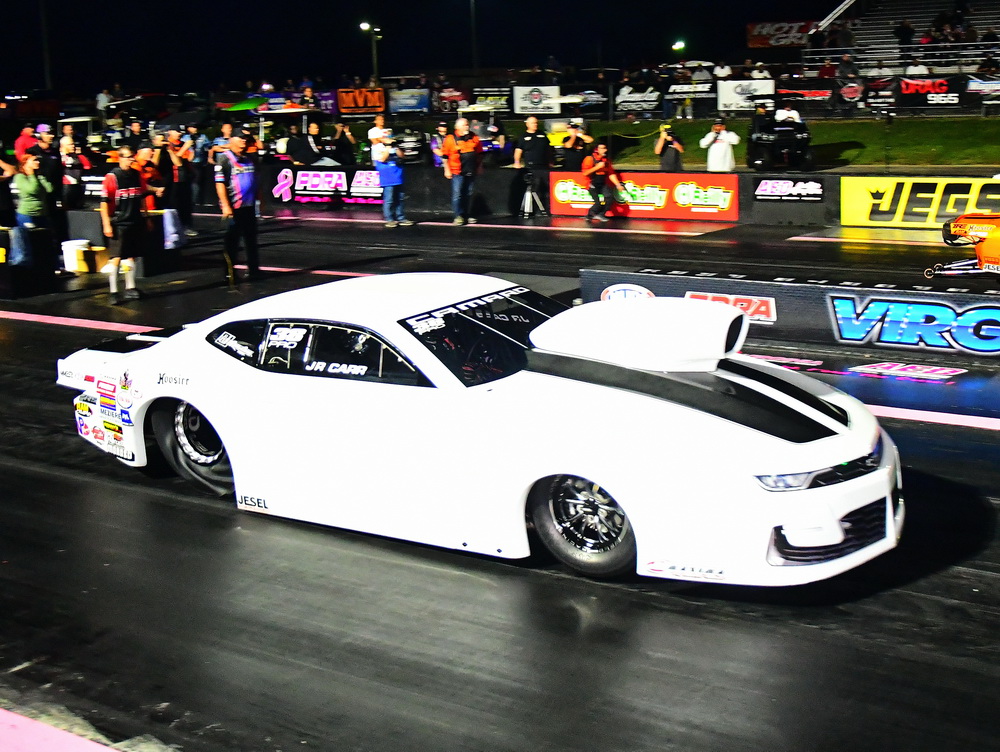 KNOCKING ON THE DOOR - With Johnny Pluchino locking up the Extreme Pro Stock world championship at the last race, the focus in the class turned to the race for the 3-second zone. JR Carr was a serious contender after running a 4.02 in the heat of the day during Thursday testing. He didn’t break into the 3s in Friday qualifying, but he was the closest out of the nine drivers. Carr’s 4.014 at 179.71 in his Frank Gugliotta-tuned ’20 Camaro gave him the No. 1 spot.

“At first we were [going for a 3-second pass],” Carr said, “but it started cooling down and the humidity was high, so Frank changed it around a little bit just to make sure we got down. At first, we probably were swinging a little harder and that's not normal for us. It was a decent run. I haven't seen it on the graph yet, but I think there's a little left. But there wasn't a 3 there. We'll take it though. No. 1 qualifier, we're happy about that for the last race of the year. We've ran 4.01, a 4.02, a 4.03 and a 4.04 this weekend. It's been a good car. It goes down every time.”

Pluchino also came up short in the chase for the 3s, but he got a career-best 4.02 at 179.80 out of the effort in his Kaase-powered Strutmasters.com ’13 Mustang. Dwayne Rice recorded one of his best passes, a 4.089 at 174.12, to qualify third in his Miller-powered Mountain Motor Mafia ’18 Camaro. 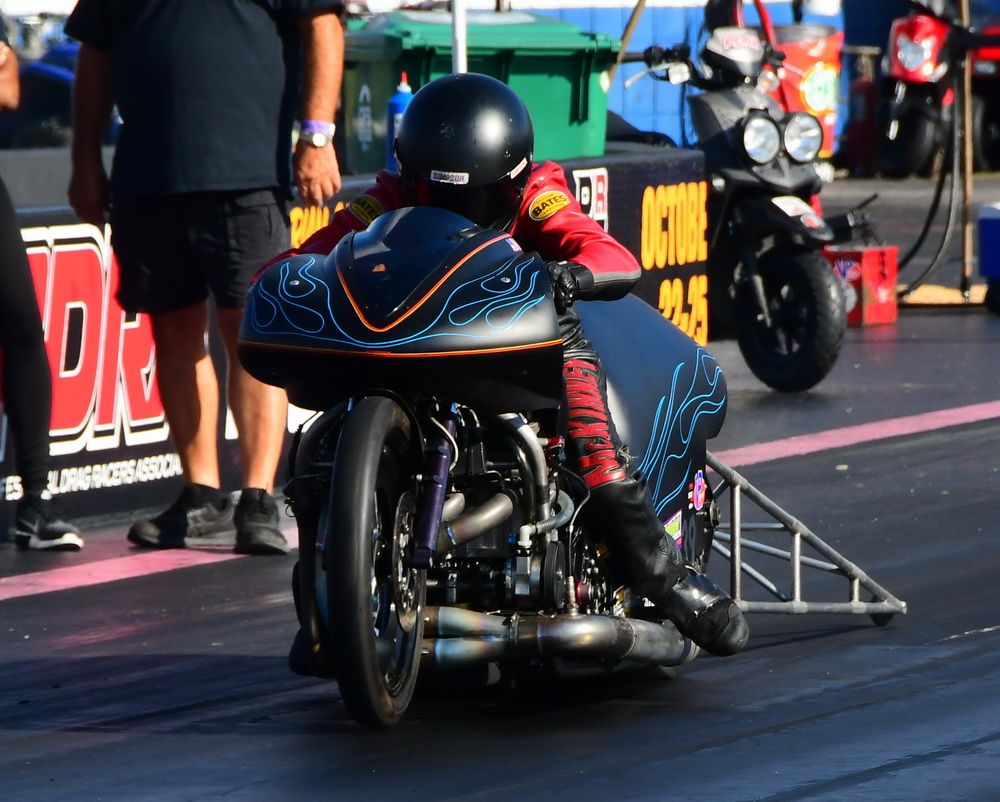 RACING FOR HONOR - The Pro Nitrous Motorcycle riders are racing for win lights, records and a trophy without championship pressures, as Travis Davis clinched his third title at the last race. Ashley Owens almost set a new E.T. record on the McKinney Motorsports Hayabusa with his 3.955 at 178.57, which was good for the No. 1 spot.

“Great pass, but like every other pass, I wish I could do it over again,” Owens said. “This is a great track and I love being at PDRA. I appreciate [team owner] Scott McKinney. This is his stuff, he just lets me tune and ride and have fun. It's all good. We're having a good weekend. It was close to the record, but close doesn't count. We’re just going to take it one pass at a time. I just have to get through first round, then go from there. We'll see what the track gives me and see if we can go faster.”

Drag bike legend Paul Gast followed Owens into the 3-second range with his 3.985 at 179.14 aboard his Fast By Gast entry. Championship runner-up Chris Garner-Jones qualified third with a 4.011 at 176.37 on the Hayabusa formerly campaigned by his late father, T.T. Jones. 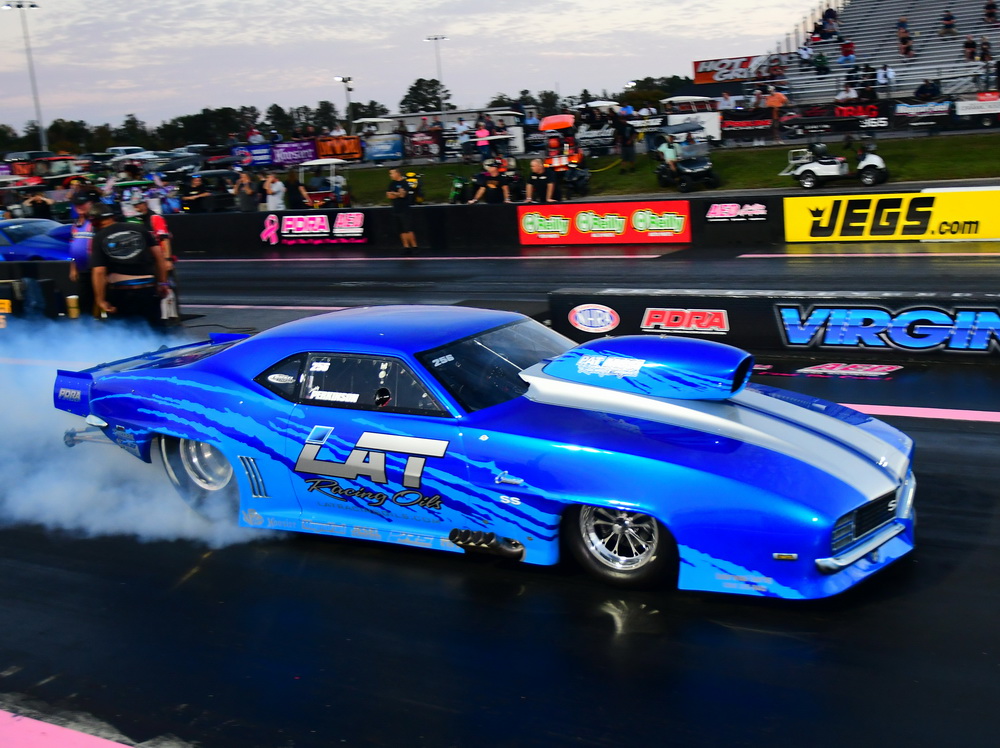 Andrew Johnson posted a 3.99 at 193.40 in the twin-turbocharged “Excalibur” ’55 Chevy typically driven by his father, Lester, to end up No. 17 in the Teets Memorial Top Sportsman qualifying order. He just missed the Elite Top Sportsman field, but the run put him No. 1 in the Top Sportsman 48 class.

Consistent low qualifier Michael White found himself in the familiar No. 1 spot in Elite Top Dragster with his 3.713 at 194.27 effort in his ’57 Chevy-themed, ProCharger-boosted ’11 Maddox dragster. Jody Stroud took the No. 2 spot in his supercharged “Zombie” ’07 Spitzer, while points leader Steve Furr ended up third with his 3.814 at 189.42 in his ProCharger-equipped ’13 American dragster.

BEING PROACTIVE - Due to a threatening weather forecast, race officials decided to move eliminations up to Saturday to complete the race before rain moves into the area. Racing will begin with first round of the Top Jr. Dragster at 9 a.m., followed by Pro Jr. Dragster, Bracket Bash, Top Sportsman 48, Top Dragster 48 and the Pro classes. The current schedule calls for completing eliminations Saturday night. 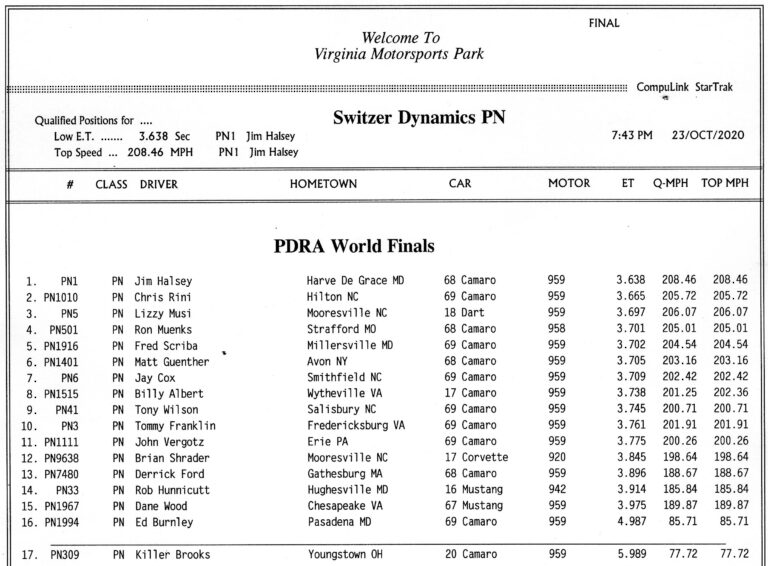 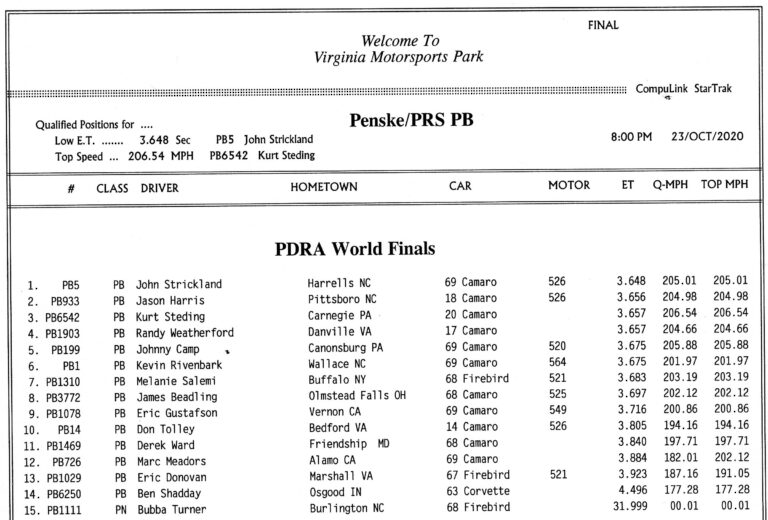 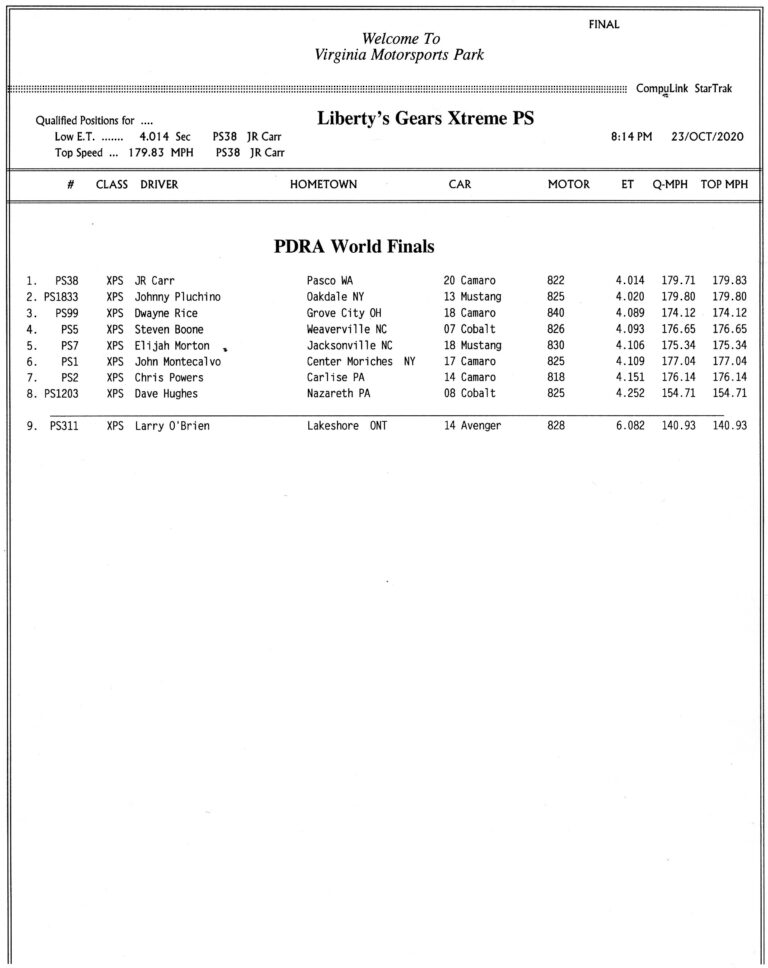 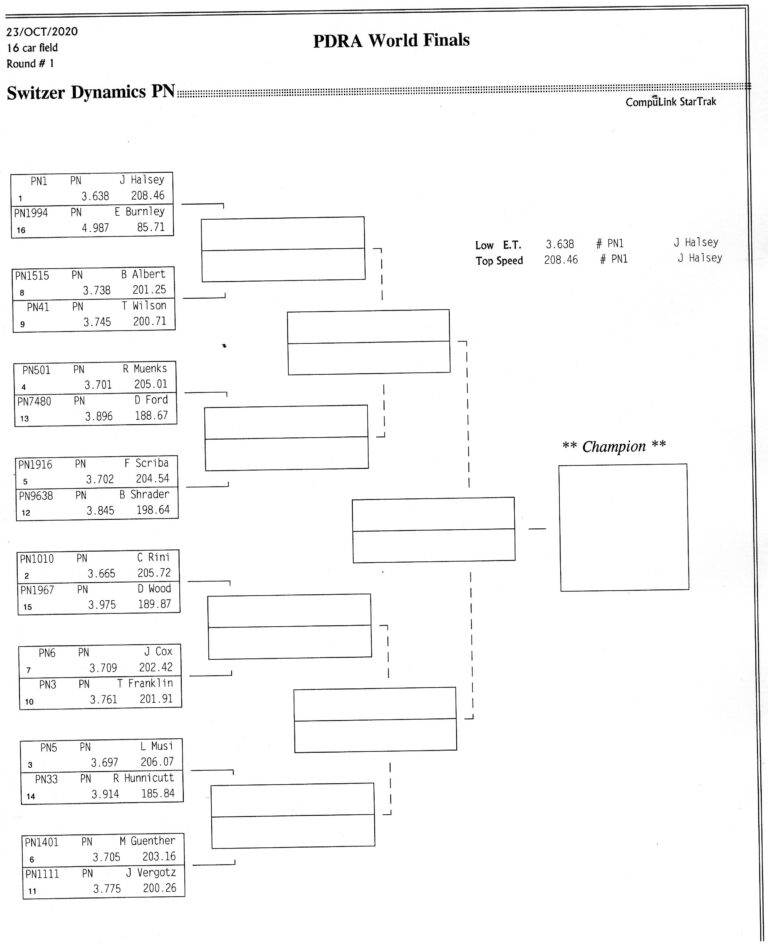 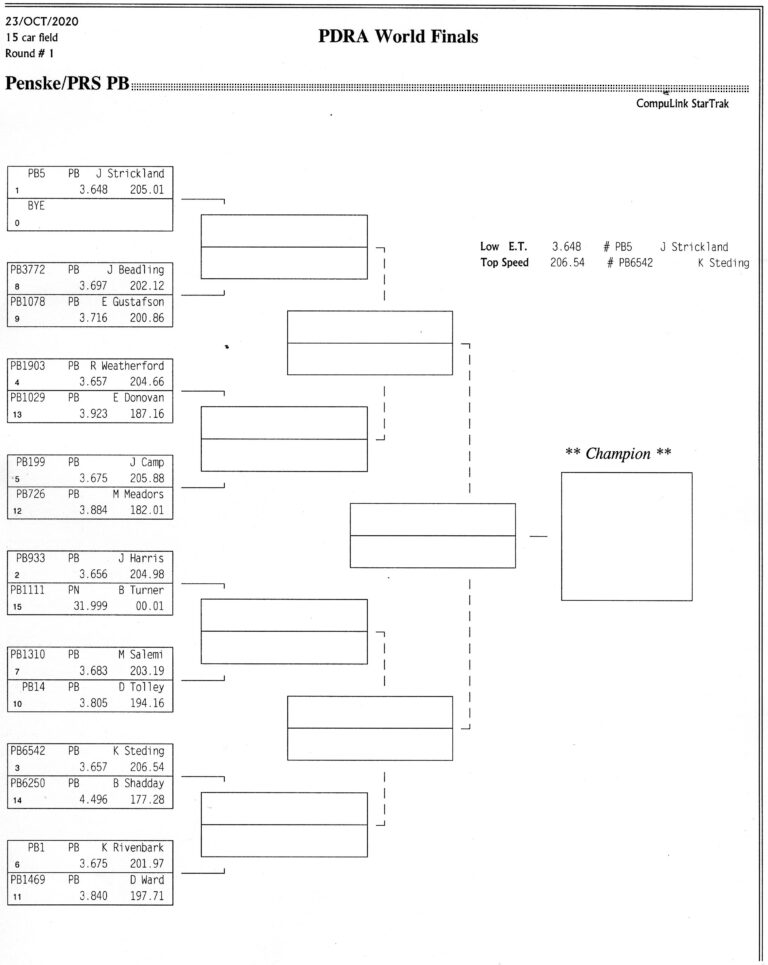 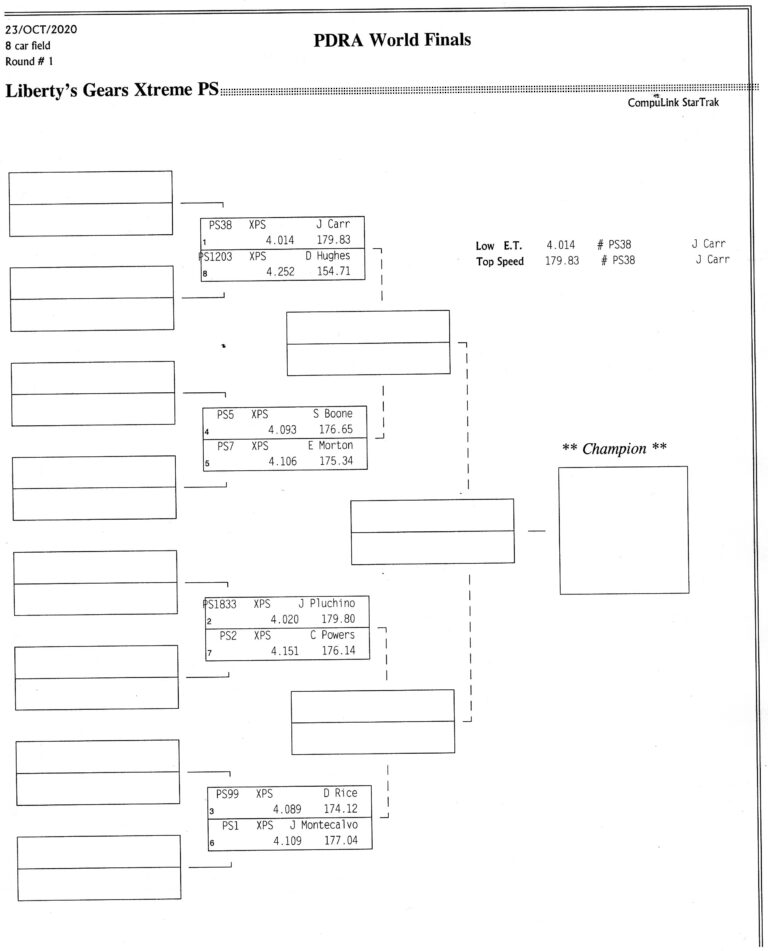