Thu, 2006-11-02 11:19
South Georgia Motorsports Park hosted their first annual Southern Nostalgia Shootout and the results provided a blast from the past. Everything from classic Gassers to "Big Daddy" Don Garlits in a front-engined dragster thundered down the SGMP quarter-mile to the cheers of fans. 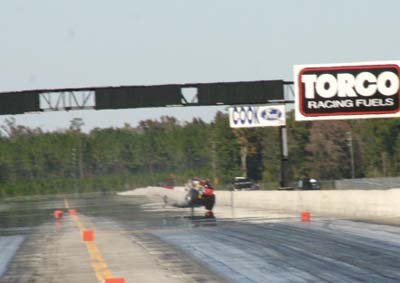 Hang on Sloopy - Don Garlits has experienced some wild rides in his day but few like the one he took during the Southern Nostalgia Shootout recently at South Georgia Motorsports Park. “Big Daddy” did a 180-degree spin in a front engine dragster. Garlits brought his Swamp Rat VIII recreation to put on a show for the fans. He made a short blast on Saturday and another on Sunday, and participated in the Cacklefest on Saturday night. He spent hours talking with his fans and signing autographs.

On Saturday, Don suited up and pushed his car down the right lane, turned around and push-started it coming toward the starting line in the left lane. He then turned in staging and made a smoky blast for 330-feet or so to give fans a feel for drag racing the way it used to be.

The sticky South Georgia Motorsports Park track surface was not conducive to making a lot of tire smoke, however, so when Garlits idled down the track and reached the finish line where the track had not been sprayed, he nailed the throttle and the car exploded in a cloud of tire smoke.

On Sunday, Don made a second run. Same procedure, with one major difference. When he reached the top end he again decided to nail the throttle, but this time the car spun out, making a full 180-degree spin and going up on two wheels. Garlits narrowly missed hitting the wall, but luckily everything turned out fine and Don and Swamp Rat VIII were unscathed. 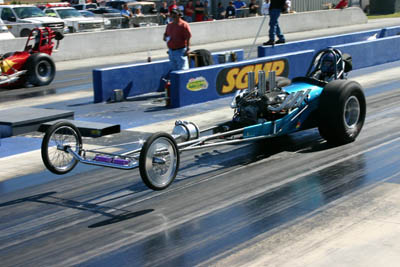 Several cars ran their personal best times, so they were really pushing their machinery to thrill the crowds. Tammy Fargo ran the quickest of the group, posting an elapsed time of at 4.91 while garnering a personal best speed of 141.61 mph. Ed Fargo drove the car the full quarter to a 7.97 158 mph on Saturday.

Charlie and Diane Meyer’s injected Chevy dragster with Diane driving was another car that carried its driver to a new personal best. John Crawford brought his injected 427 Chevy Logghe car from Ohio and also ran a personal best on the South Georgia Motorsports Park concrete. Dave Workman had his beautiful blown rat-powered dragster on the track for a number of runs, but was having problems. Even though he broke two transmission shafts, grazed the wall, and had to repair his steering, he never missed a session.

Both Workman and Tammy Fargo participated in the Cackle Event on Saturday night, and Tammy out-flamed Don Garlits and Roger Gates in Denny Fenstermaker’s car. 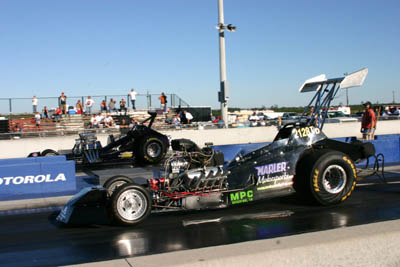 Sportsmanship Exhibition - In some ways, the Supercharged Altered final was one of the most interesting of the Southern Nostalgia Shootout.

Ken Gonyo clearly had the field covered as number one qualifier. In the final against Bill Heister, Gonyo lost fire on the burnout. Heister, who had already started his car but not made his burnout, shut off his motor and allowed Gonyo's crew to take their support vehicle out to their car and re-fire it.

Gonyo handily defeated Heister with low elapsed time and top speed for the altereds, 4.282 at 169.78 mph (eighth-mile) to Heister's troubled 5.76 at 90.95 mph. Heister could have walked away with the easy win, but his outstanding show of sportsmanship really shows what nostalgia racing is all about.

Kings of the Hill - A limited Top Fuel purse wouldn’t deter the great cars that came to race. The bulk of the cars competing are those that you often see racing during the traditional Hot Rod Reunion in Bowling Green, Kentucky.

Lincoln Hassell made the trip from North Carolina a worthwhile one by landing in the top spot with a 6.814 elapsed time with a mile per hour of 196.42. Both ends of the run stood as performance marks for the weekend.

Palm Beach, Florida’s Kevin Sine was the only other dragster in the six-second zone.

Get Your Motor Running – Charlie Smith towed all the way to Valdosta from Tulsa, Oklahoma only to be sidelined with mechanical problems. In an ironic twist of fate, Smith was crowned the “Best Engine” award. 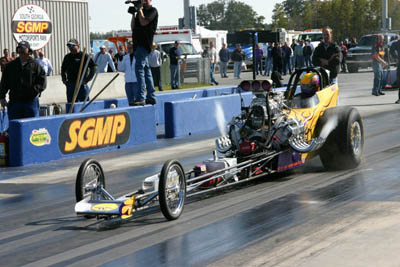 Three out of five – Three Top Fuel cars made the first round. Hassell beat the Chevy fueler of A. Douglas with a 6.853, 185. Sine (6.97) singled when Charlie Smith couldn’t run.

The final round provided more excitement in the shutdown area than in the first quarter-mile. In the final Sine outreacted Hassell and beat him to the finish line with a 6.957, 193.

Hassell’s throttle hung open and he went off the end of the strip at a high rate of speed. He was taken to the hospital as a precautionary measure for back pain. Hassell was later released with only bruises.

New to the Old Gig - Julius Hughes III made an appearance for some license passes with the new Atlanta Speed Shop dragster. He was driving the former Frank Spittle Syndicate of Sound fueler with an engine campaigned by his father back in the 70s. He made some great runs for the crowd. Look for this team in competition soon.

Bad Boys - The Baddest of the Bad category was established for anyone who wanted to step up and race heads-up for a six-foot trophy and cash. This was the only category where nitrous oxide was allowed.

Matt Gilmore, driving his quick 8 Austin Bantam altered was number one qualifier followed by Charlie Gambino in his roadster funny car. Also solidly in the field was Mike Forsythe with his 1963 Corvette Top Sportsman car just ahead of the Morgan Motorsports nitrous-injected 1968 Camaro.

In the final, Gambino set low elapsed time and top speed with a 4.059, 178.92 run to beat Matt Gilmore who fouled. On Friday, Gilmore ran the quickest elapsed time of the event with a 6.45 on his only full quarter mile pass of the event. That was nearly half a second quicker than Top Fuel. 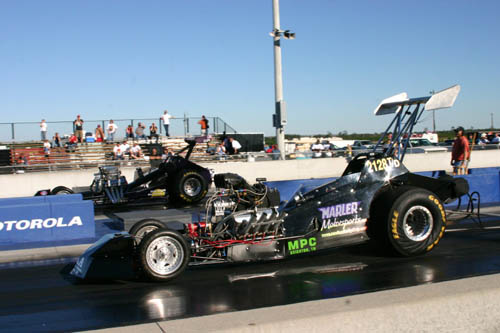 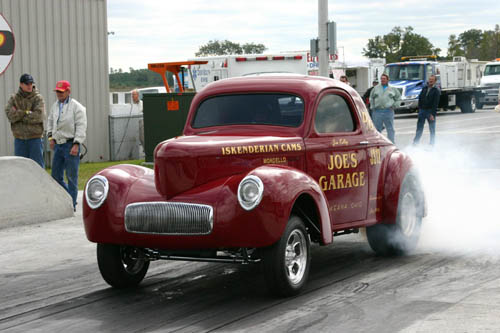 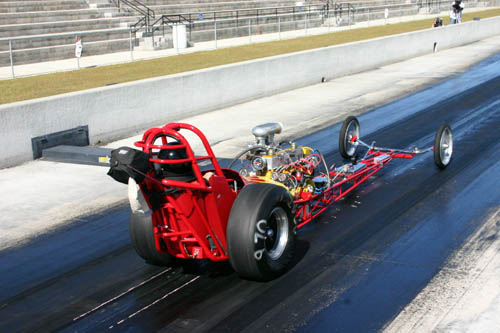 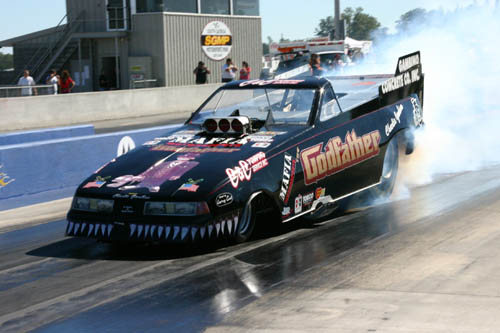