NHRA Top Fuel driver Rod
Fuller and Firebird Raceway might just be the hottest combination since peanut
butter and jelly. The Las Vegas-based driver of the CAT-sponsored dragster has
won fifteen consecutive rounds of competition at Firebird.

“To me, Phoenix is the promise land,” said Fuller,
who finished runner-up in the 2007 championship standings. “The last three
times I’ve raced there we’ve won, so we have a great streak going on. Arizona is like a second
home. We did really good in testing and we have a good combination for that
race track. I’m very excited going into Phoenix.”

Fuller qualified 10th at
the season-opening Winternationals two weeks ago with a time of 4.539 seconds.
He advanced to the quarterfinals before falling to two-time champion Larry
Dixon. Fuller clocked low elapsed time of the event at 4.494 seconds in the first
round. It was the sixth low E.T. of the meet for Fuller.

GOD SPEED MINISTRY SEARCHING FOR DIVISION ONE CHAPLAIN AND OTHER VOLUNTEERS

It is the vision of God
Speed Ministry to build a community of faith within the family of IHRA drag
racing, its participants, sponsors, officials and fans. With this we are
committed to serving this community by providing a chaplain at every IHRA
divisional and national event.

We are currently searching for a chaplain to
serve in IHRA Division One. If you share in our vision and share God’s heart for
racers, we welcome the opportunity to talk to you more about investing with us
in God’s kingdom.

Bakersfield born and bred in 1959, the drag race that helped put the
city on the map is turning 50 during its 3-day run, Mar. 7-9 at
historic Auto Club Famoso Raceway.

“We’re celebrating 50 years of racing here,” said Blake Bowser, vice
president and general manager of the Kern County Racing Association,
operators of Auto Club Famoso and producers of the fabled March Meet.
“It’s a historic occasion that all of Bakersfield, Kern County and drag
racing can be proud of.”

Half a century ago, Bakersfield was a sleepy oil town best known as the
last stop before climbing the “Grapevine” road to Los Angeles.  Things
changed rapidly when local country singer Buck Owens rose to fame in
the late 1950s. At the same time, drag racers from around the country
began pouring into Famoso for quarter-mile runs. 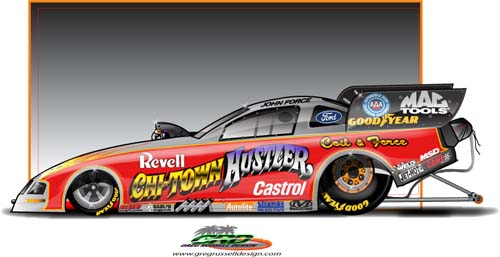 One
of the hottest topics floating around the Pomona pits during the NHRA
Winternationals was the special fantasy feature on Torco’s
CompetitionPlus.com proposing a weekend of drag racing throwbacks
similar to the one promoted by the National Football League honoring
vintage years. Up and coming rendering artist Greg Russell [http://www.gregrusselldesign.com ] combined classic paint schemes on modern day Funny Car body styles with current drivers.

Don’t get your hopes up for the chances this concept will happen in a modern drag racing setting.

Brandon Bernstein has a certain affection for Firebird International
Raceway.  The Firebird quarter-mile was the site of his first Top Fuel
victory in his 2003 rookie season, and he defended that win with
another in 2004.  Brandon followed in his father’s footsteps as this
was also the track where six-time NHRA champion Kenny won his first Top
Fuel event in 1991.

Additionally, Brandon and the Budweiser/Lucas Oil team hold the current
mile per hour record in Phoenix at 333.74 mph set in 2005.

When the NHRA circuit makes its second tour stop Feb. 22-24 at the
Checker Schuck’s Kragen Nationals, Bernstein and the team hope to
return to that winning groove. 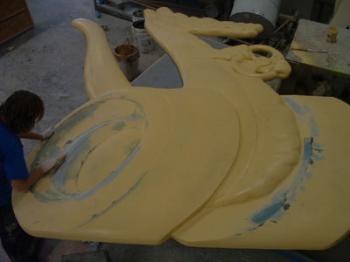 In a nod to the historic tradition
of the ACDelco NHRA Gatornationals, the new tower at Gainesville
Raceway will be adorned with a 10-foot sculpture of the iconic
racecar-driving alligator that made its debut at the inaugural classic in 1970.

BUEHRING AND HECKEL STEPPING UP TO NHRA PRO STOCK 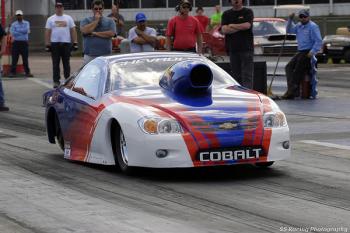 NHRA Sportsman Racing standouts Mark Buehring and Shane Heckel will be stepping
up to the professional ranks as the duo will field a 2007 Chevy Cobalt in the
NHRA Pro Stock class.  The Rick Jones built chassis will be powered by a Taylor
Lastor prepared 500 cubic inch DRCE 2 engine.  Buehring and Heckel will split
the driving duties at 14 planned events on the NHRA POWERade Series tour this
season.  Buehring finished third nationally in the Super Gas (9.90 second
index) category in 2005, while Heckel is a perennial heavy hitter in the
Competition Eliminator category with his family's national-record holding
B/Dragster (a dragster with a Pro Stock legal engine).
After his success in Super Gas, Buehring, from
Houston, stepped up to the Top Sportsman class in his '91 Chevy Lumina that was
capable of running elapsed times in the low seven-second zone at over 190 mph.
With Heckel, from nearby La Porte, Texas, having success with his Pro Stock
style engine and drivetrain in a dragster, what started as casual conversation
in Heckel's race shop, Ballistic Racecraft, is well on it's way to becoming a
reality for the 2008 season.
"I'm very excited about making the move to the professional
ranks," said Buehring.  "We have a steep learning curve ahead of us, but I'm
confident we have the right people and equipment in place to get
there."

The Outlaw Small Block Association (OSBA) is a newly formed drag race
organization created for racers utilizing the small block V8 engine to make
their power. The purpose of the association is to create a drag  race
enviornment  where racers, engine builders and vendors supplying the parts for
the smaller cubic inch engines can connect. OSBA members get an opportunity to
showcase their talents and have fun doing so, while delighting the drag racing
fan with something new and exciting. The association's website can be found at
www.osbadrag.com .

GARRETT BY HONEYWELL & ANNETTE SUMMER TEAM UP IN 2008 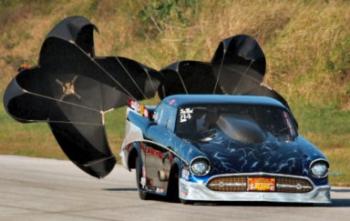 Annette
Summer’s reputation on the track is equaled by that of the products produced by
Garrett by Honeywell. Both are tough, reliable, and of championship caliber.
That being said, it’s only natural that this racer and this company join forces
for an assault on the Pro Modified record book in 2008 and beyond.
Summer,
based in Aiken, South Carolina, won two NMCA/NSCA Pro Street championships
before turning her attention to Pro Mod competition several seasons ago. Her Tim
McAmis-built 1957 Chevrolet was originally powered by a nitrous-injected
powerplant, but in 2002 Annette and husband Vernon made the switch to turbo
power and embarked on a journey of research and development that may now be
coming to its logical and successful conclusion.
There
have been records and big wins along the way, with both the “shoebox” Chevy and
a 1963 Corvette built by Vanishing Point Race Cars, but there are undoubtedly
many more to come, thanks to Garrett by Honeywell, a world leader in the
development of turbocharging technology.