Reigning NHRA POWERade Pro Stock champion Jeg Coughlin Jr. arrives at Firebird
International Raceway for the 24th annual CSK NHRA Nationals riding an
incredible streak of four final-round appearances in a row. Coughlin's run is a
big reason why he's wearing the '07 crown and is currently second in the '08
points.

Coughlin closed last season with a runner-up finish in Las Vegas
and a huge win in Pomona, Calif., that secured his fourth drag racing world
title. After a busy holiday break, the 51-time national event winner returned to
Las Vegas in his JEGS.com Cobalt and promptly won the Pontiac Showdown preseason
test, before heading back to Pomona for the '08 season opener, where he finished
as runner-up in a field of 22 cars.

The Brett Stevens
Racing team showed why they are a dominating force in the ANDRA Championship
Drag Racing series with an incredible display of record setting performances
over the weekend at the Western Sydney International
Dragway.

Completing at the Summernationals, the
team treated the big crowd that attended the event with numerous benchmark
performances with the highlight being Kath Stevens World Record setting
performance in her 3000 horsepower Jack Daniel’s Racing Ford Falcon Top
Doorslammer.

Kath created history on Saturday
(16th June), which was also her 31st birthday, by becoming
the first ever women to run a 5 second quarter mile pass in a ‘doored’ car when
she laid down a stunning 5.96 Elapsed Time.

The 2008 Summernationals at Western Sydney Dragway conducted in front of big
crowds over two days has been hailed by many seasoned observers as one of, if
not the best event in Australian Drag Racing history.

"I have been racing
a while and I would have to say this event is as good as any I have been in or
seen before, it might be a while before we see an event like this again -
anywhere," remarked Doorslammer runner-up and Championship points leader, John
Zappia.

Even at of the time of this writing, the WSID PR and
administration have already been besieged by competitors across all categories,
spectators and corporate partners from around the country as to the amazing
quality of the 2008 Summernationals stanza and interestingly the crowd
atmosphere during the event reached new levels of excitement never seen before
at the multi-million dollar, world-class purpose built Drag Racing facility
nestled in the heartland of Western Sydney.

TORCO'S COMP PLUS ON MYSPACE

Torco's CompetitionPlus.com has a MySpace page and you're welcomed to visit.

The URL for our MySpace page is http://www.myspace.com/competitionplus .

According
to Torco's CompetitionPlus.com editor Bobby Bennett, Jr., the page is
yet another means for the e-zine staff to interact with its hundreds of
thousands of daily readers.

Doc's Harley-Davidson, Missouri's oldest exclusive Harley-Davidson dealership,
is partnering with three-time POWERade champ Angelle Sampey and Karl Klement
Racing for the 2008 NHRA Pro Stock Motorcycle tour. "I'm very excited to
represent a dealership," said Sampey, a motorcycle dealer herself. "My dad's
been riding Harley-Davidsons all my life, so I'm really excited about
it."

Based just outside of St. Louis in Kirkwood, Doc's is the number 1
(out of 682) Harley-Davidson dealer in the country for the new purchase
experience over a rolling 12 month average. Interestingly, Doc's is also owned
by a woman—Pat Bush. "Pat rides, used to drag race, and loves Pro Stock
Motorcycle racing," said Doc's marketing director Rich Blosser. "She's attracted
to the idea of Angelle as a woman rider. She'd heard from George Bryce (the
six-time champion tuner of Sampey's Rush Racing Buell) that Angelle had the best
natural talent he'd ever seen."

"When Karl brought Angelle on board, it
was the biggest story in racing and we wanted to be a part of it," said Jim
Wagner of Doc's. Wagner is Doc's sales leader now, but in the past he led Doc's
racing assault on the flat tracks.

Kath is the only female in Australia that
competes against the men in the professional Top Doorslammer bracket, and took
it another step further by becoming the first female in history anywhere in the
world to drive a ‘doored’ car down the quarter-mile strip in 5
seconds.

Lining up against team mate Steve Packman in his SP
Racing Ford Falcon in the B quarter-finals, Kath surprised all by laying down an
amazing 5.96 second pass to take the round win in her 3000 horsepower
beast.

“This is amazing! We have been working and developing
our Brett Stevens Racing built Ford Falcon Top Doorslammers now for around 18
months and it has all finally paid off,” Kath Stevens
said. 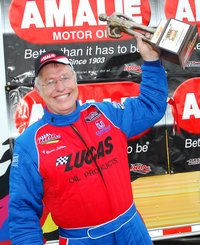 As
the memories of a magical 2007 racing season fade, Bruce Litton is
ready to turn the page. A few short months removed from claiming his
first career Top Fuel world championship, Litton and his Lucas Oil Race
Team are gearing up for an all-out assault on the 2008 points chase.

“Winning the IHRA championship was very special, something I will never
forget,” Litton said from his Indianapolis-based race shop. “But I just
looked at the calendar and saw its 2008 now. Everyone is even and I
know it’s going to be a dogfight this season. We’ll have to be at the
top of our game if we hope to make some noise on the IHRA tour this
season. We’re confident we can do well again this season, but if we
think we can just show up and not put in the work we’ll get our tails
kicked. We have to work harder this season than we did last season
because everyone always guns for the guy with the #1 on his car.”

Litton’s 2007 Hadman Dragster will look different in 2008 it recently
received a fresh coat of paint, but the chassis will be the exact one
he drove to three national event victories and the world championship
last season.

Every
Friday, Torco's CompetitionPlus.com brings you our Feedback letters.
Read what our readers have to say about our feature articles and you
can even offer your opinions.

File this in the "Just When You Think You've Heard It All" section.
If you're single, and a NASCAR fan, you can meet other single race fans
through the website Meet Me At The Races.com.

Currently, therre are no listed plans to expand into drag races, but the concept is an interesting one to say the least.