CP MOTORSPORTS –THE PICTURE GROWS BIGGER AND BRIGHTER IN BRISTOL. 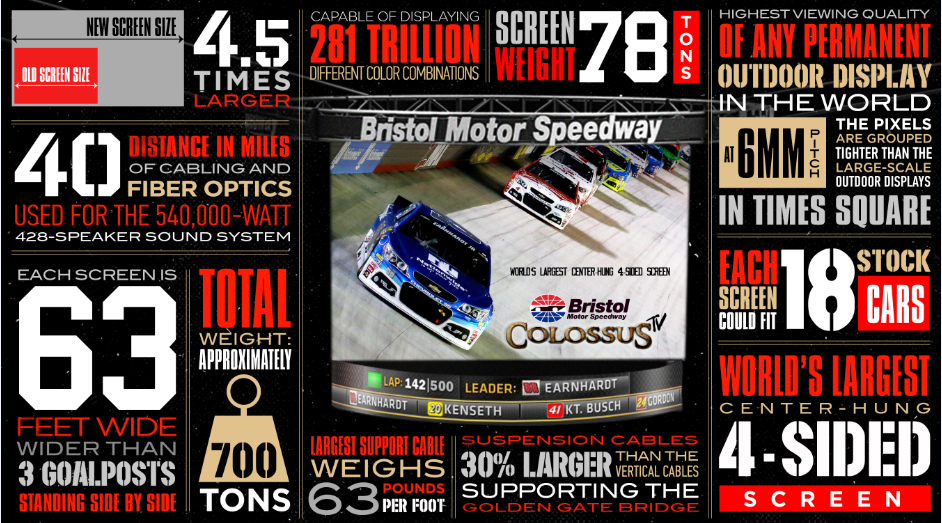 Before next year’s two Sprint Cup races and the historic Sept. 10, 2016 Battle at Bristol football game between Virginia Tech and the University of Tennessee, the track’s existing pylon and screen frame will be removed for a 700-ton creation dubbed Colossus.

“The lights, sound, TV and everything is just off the charts,” Caldwell said. “It’s an amazing addition and enhancement for the race fans, and it’s going to take us to a new level.”
That new level at the .533-mile concrete oval could feature a variety of large-scale events, ranging from concerts and more football games to other motorsports attractions.

BMS is already the home to a popular monster truck show spectacle, plus the 160,000-seat  track hosted a Global Rallycross event in 2013.

“The sky is the limit,” Caldwell said.

Construction is scheduled to begin in November.

“It will be a sound system to beat all sound systems to go with the greatest TV in the world,” Smith said. “And what that really means for the city of Bristol and the state of Tennessee is that Bristol Motor Speedway is now home to one of the greatest sports entertainment venues in the entire world.”

“As (former BMS general manager) Jeff Byrd always said, we love to exceed expectations and we want to make a big impact on people. What this comes down to is having a place where where hundreds of thousands of people can come and make memories that last a lifetime.”

And Smith hinted at more big projects in the future

“Stay tuned. We love to outdo ourselves,” he said.