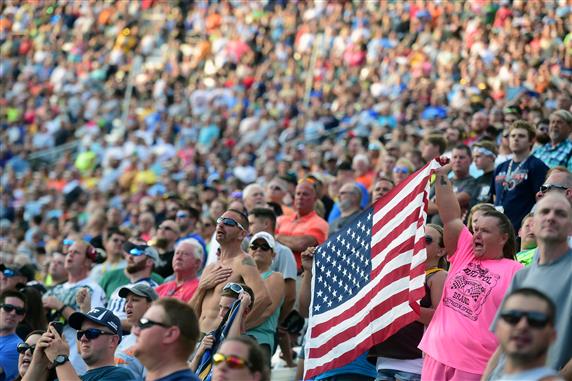 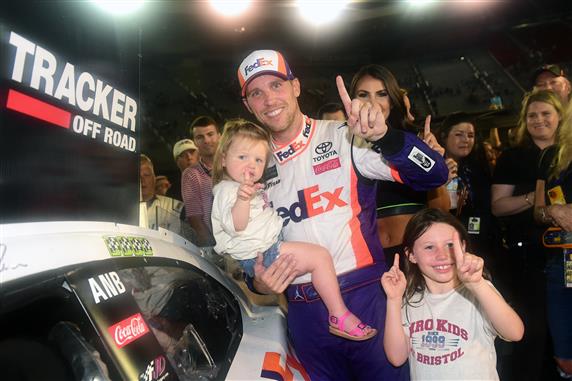 Less than ten laps. That’s all Matt DiBenedetto needed to get his first career NASCAR Monster Energy Cup Series win at the Bass Pro Shops NRA Night Race at Bristol Motor Speedway and but wouldn’t come to be as Denny Hamlin would come and the hopes for driver trying to prove he deserves a high-profile ride next year, As he is being replaced by Leavine Family Racing for 2020, and that he belongs with the best of them.

Denny Hamlin started the week off strong as he picked up the pole and immediately got away to a strong lead. The lead would start to dwindle though as the bottom line would start to come in and let Kyle Larson, the second-place starter, catch up as Denny would start to get loose. Only sixteen laps in and Hamlin lost the lead after getting very loose and going high which allowed Larson to go by. Larson lost the lead ten laps later as the high line finally started to come in for Hamlin and gave him the opportunity to get back to the lead. Hamlin lost the lead again to Larson as he got caught behind Michael McDowell and had to slow down but he got it back soon after since Larson just couldn’t hold the top. Joey Logano had to dive down pit road with an issue on the left rear; leaving him multiple laps down and setting himself up for a long night. Hamlin almost caused a caution as he came down across Paul Menard’s bumper and got the both a little loose. The first caution of the night came out after Austin Dillon lost a tire and collecting Jimmie Johnson as he came up the track; Hamlin also got some damage which made him lose positions in the pits under the caution. Larson got the lead after pitstops with Chase Elliott in second. More issues for the drivers involved in the first caution as Dillon had more issues and pitted while Johnson no longer had the speed to stay ahead and fell down another lap; essentially putting him in a need to win situation to make the playoffs as he continued to fall back. Elliott and Larson began to have a side-by-side battle for the lead as Daniel Hemric tried to hold them off to stay on the lead lap; Larson with get the edge on hold on to win the first stage.

Stage two began with Chase Elliott getting out to lead with Kevin Harvick behind and starting to settle there for a while. With eighty-six laps to go in the stage, Harvick caught Elliott on the bottom and got around him using the top. After some time, Hamlin hit a rough spot as he had to pit as he believed he had a loose tire right when Aric Almirola made a move similar to last week as he cut a corner too early in front of JJ Yeley and getting into the wall after the bump. After the stops for the caution, Martin Truex Jr. got the lead with Harvick behind him. Truex pulled ahead while Ryan Blaney went very high to get by Larson and get second; the caution then came out for Almirola spun again as he got loose due to his damage. The caution gave Kyle Busch, who had started at the back and had been a lap down for some time, the free pass he had been asking for nearly all race. Truex, with another strong start, gets away while Kurt Busch holds back to fly around multiple cars on the outside and pull into second. The caution came out again as Clint Bowyer pulled a move nearly identical to Almirola and got spun off the bumper of Quinn Houff; a costly mistake for Bowyer. The restart came with two to go right as Kevin Harvick went to the garage and was done for the night as the clutch broke when he tried to leave his pit. Kurt Busch went on to easily win the stage, but Daniel Suarez stayed out to finish second and get the very helpful nine points as it officially put him in the playoffs ahead of Bowyer by three points.

Kyle Busch stayed out to inherit the lead for the stage three start and would hold the lead only for a few laps as Brad Keselowski got by him. After a close call with Paul Menard coming up in front of Keselowski and slowing him down, the race began to settle down. Kyle Busch caught back up to Keselowski and the two would use lap traffic to switch back and forth for the lead. Busch was in desperate need for a caution and he got exactly what he asked for as Truex would get the wall and be slow around the track and need to pit right as Alex Bowman has his left front go down and collects Logano and Byron; bringing their possibilities for a good finish to a standstill. After the pit stops, Kyle Busch lost the lead to Erik Jones on the restart right before Ryan Blaney had his right front blow and collected Michael McDowell, David Ragan, Ricky Stenhouse Jr., and Jimmie Johnson; Johnson and Blaney were able to continue while the other three were done. Erik Jones went to lead as the restart came around, but after Kyle Busch got loose Jones had some competition, Matt DiBenedetto. DiBenedetto had been methodically keeping himself in the top five nearly all race and was finally in position to be there for the lead when a mistake was made. The mistake came after Jones got into the wall and had to pit as the packed stands roared for the underdog. DiBenedetto got ahead and wouldn’t look back for some time as he was patient and took his time throughout the field. Everything changed when Denny Hamlin started to attack through the field as well; on fresh tires and no one to really hold him up he got to second with fifteen to go. DiBenedetto got slowed down as Ryan Newman, who was the last car on the lead lap and also fighting for his playoff chances. With some contact with Newman, DiBenedetto lost the lead to Hamlin with less than 10 to go. Trying with all his heart, DiBenedetto just could not get back to the lead and Denny Hamlin went on to win his fourth race of the year. The win went to solidify Hamlin as a possible new favorite to win the championship as the team has started to be a serious contender every week while second-place was DiBenedetto’s best Cup finish and cemented him in the hearts of many a fan as the fan-favorite who they believe deserves the chance at superstardom. 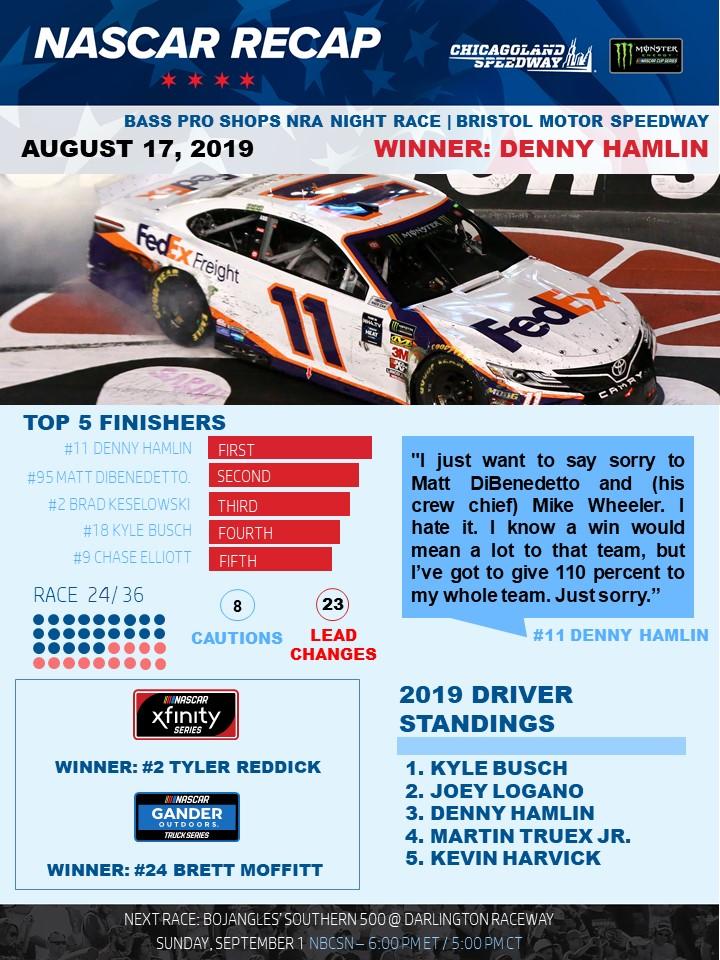