BACK TO THE FUTURE: PRO MOD STYLE, PT. 1 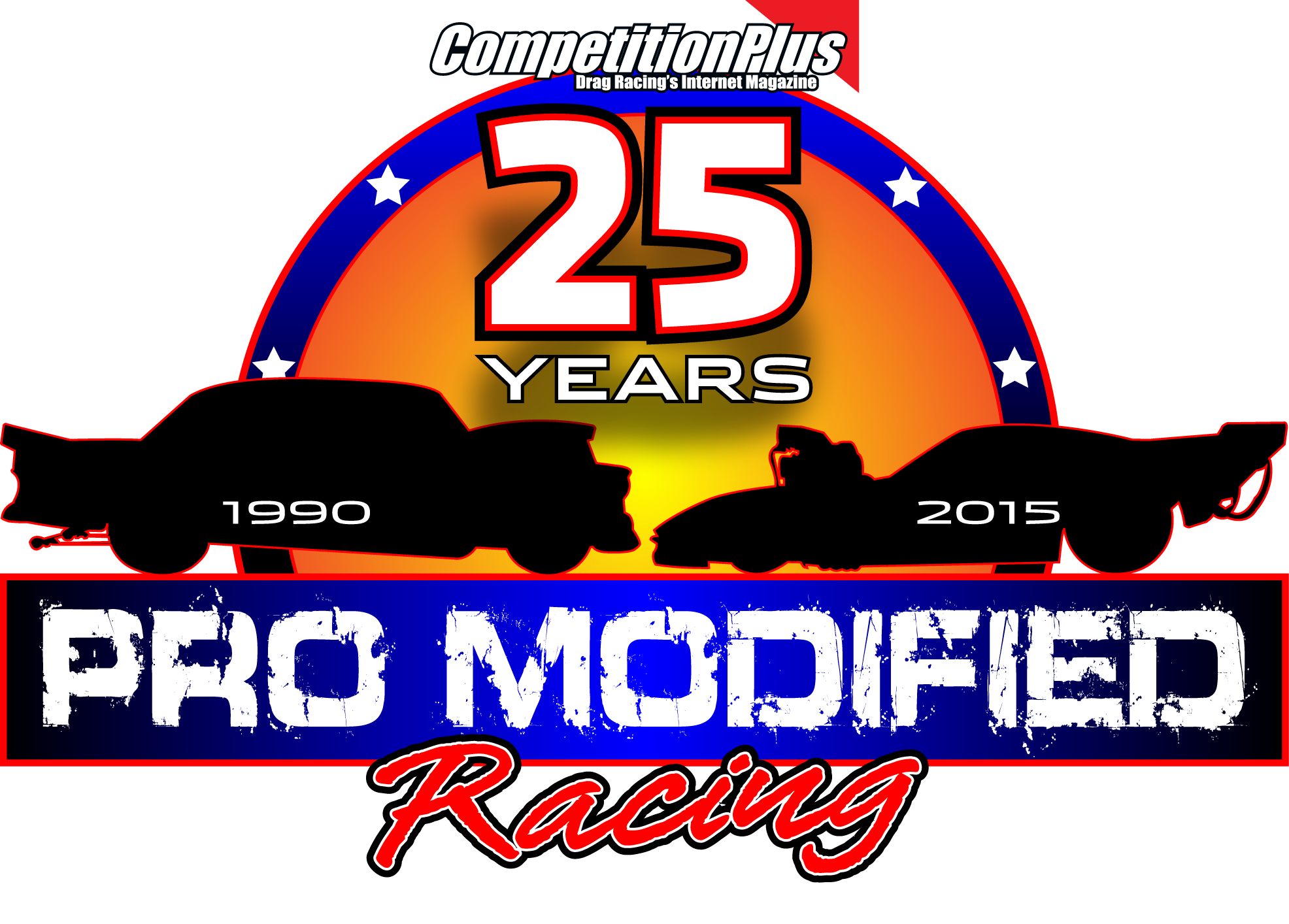 March will mark the 25th anniversary since the Pro Modified division officially raced at a national event as a professional category. Since then the division has grown from a gathering of aspiring professional drivers to the top shelf of professional drag racing.

Back then, there was only one major series for these racers to compete for a world championship. This year, with the return of the eliminator to IHRA, there will be three major venues to showcase this division. Twenty-five years ago, many of us who watched this style of racing blossom into something special would have believed a racing series based on Pro Modified [PDRA] before we would figure a 10-race schedule in NHRA.

March will mark the 25th anniversary since the Pro Modified division officially raced at a national event as a professional category. Since then the division has grown from a gathering of aspiring professional drivers to the top shelf of professional drag racing.

Back then, there was only one major series for these racers to compete for a world championship. This year, with the return of the eliminator to IHRA, there will be three major venues to showcase this division. Twenty-five years ago, many of us who watched this style of racing blossom into something special would have believed a racing series based on Pro Modified [PDRA] before we would figure a 10-race schedule in NHRA.

Since we at CompetitionPlus.com have long-reaching roots into this style of racing, we've partnered with up and coming artist Ian Hawkins. This series is a fun artist's showcase of what these racers would have looked like in today modern era of volatile doorslammer racing.

We've tried to limit these to those who are no longer racing as well as a few of our heroes who have passed on from this earth. And before you fire off a nasty email regarding who we might have left off, just keep in mind there will be a Part Two of this series.

WALTER HENRY - Just five months shy of the official national event debut for the Pro Modified division, a fatal crash robbed the Pro Modified community of one of it's more colorful personalities. Walter Henry lost his life during a run at Atco Dragway in New Jersey, as the IHRA showcased their new class in October 1989. The race was to be the last one for Henry, a decorated Vietnam veteran with the 7th Air Cav, as he planned to turn the wheel over to son Gary. With Henry in a tuning role, there's no telling where he could have gone. One thing is for certain he would have aggravated the nitrous racers to high heaven. It's only fitting Hawkins has him in a supercharged, C-7 Corvette. 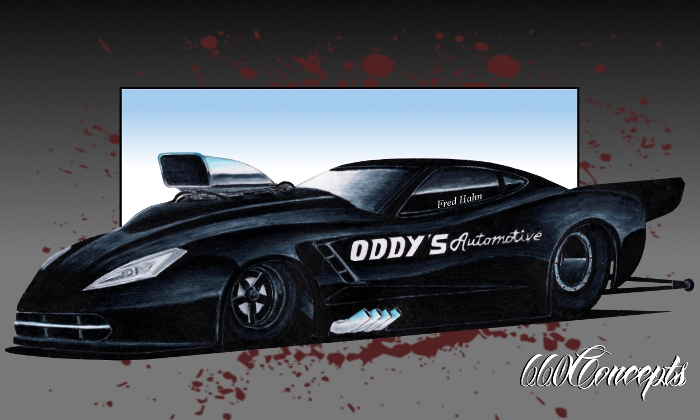 FRED HAHN/JIM ODDY - There was no car more sinister than the old Black Mariah of Jim Oddy and driven by former Fuel Altered standout Fred Hahn. How intimidating does one have to be when the sanctioning body makes rules, and they are everything your car isn't? Imagine when the Top Sportsman Quick Eight cars were just cracking into the 6.80s, Hahn reeled off a 6.69 elapsed time in the final Quick Eight event before Pro Modified. Both Hahn and Oddy retired from Pro Modified, but if they decided to return -- we could see this entry from the dark side. Well ... minus the solid suspension.

GORDY HMIEL/SCOTT SHAFIROFF - As we stated in our Pro Modified's Top 25 all-time drivers feature, we can only wonder what might have been had a plane crash not robbed us of the talents Gordy Hmiel possessed. Hmiel, along with iconic engine builder Scott Shafiroff, were front-runners in the race to make Pro Modified a professional eliminator. This car would have been quick, fast and clean. 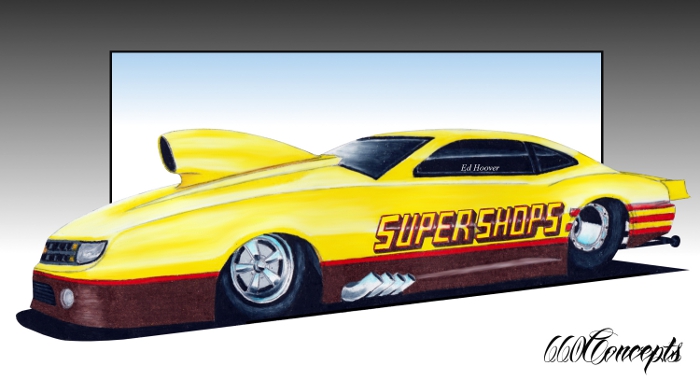 ED HOOVER - Ed Hoover, before Pro Modified came around, was an extremely talented diesel mechanic. How does this fit into Pro Modified? Whatever "The Hoov" put his mind to, he succeeded. We could see Hoover teamed with Paul Trussell, and back in his native nitrous combination, making life complicated for those who crossed their paths. 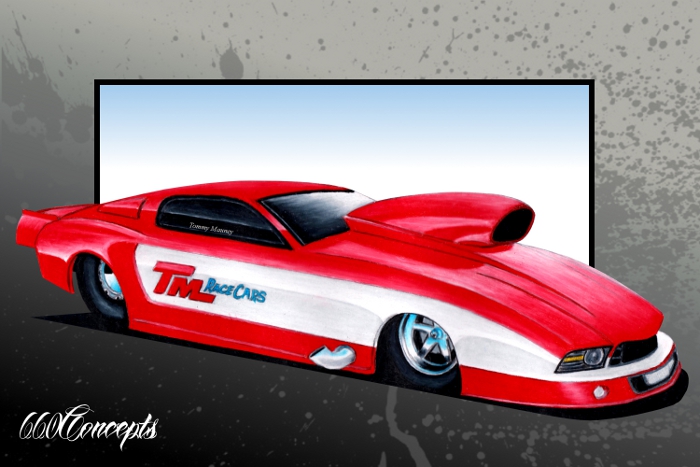 TOMMY MAUNEY - There's a good reason why Tommy Mauney was absent in the history of Pro Modified's inaugural season. He was busy winning a mountain motor Pro Stock championship. In 1991, Mauney made his debut in Modified. There's about a dozen different body styles we could have put Mauney in, but this Mustang with the TM livery just looks bad. And, while we have limited this series to those no longer running Pro Modified, we found out after this rendering was completed, that the two-time professional world champion plans to run PDRA this season.

JIM FEURER - We shall christen this Ford Mach 1 as "Little Zeke." If there was any racer who marched to the beat of a different drum, it was Animal Jim, the former Pro Stock racer who made racing a Mercury Zephyr as fashionable as his pink sunglasses. Animal once made the comment on Facebook his favorite Mustang was this early 1970s body style. Well, your wish is our command.

RONNIE SOX - Before the Ford diehards start throwing bricks, many race fans will always see Sox as a Mopar man. We cannot help but think "The Boss" would have taken a liking to the '57 Saratoga made famous by Australian star Peter Kapiris. Move over Comet, the real Batmobile is coming through! 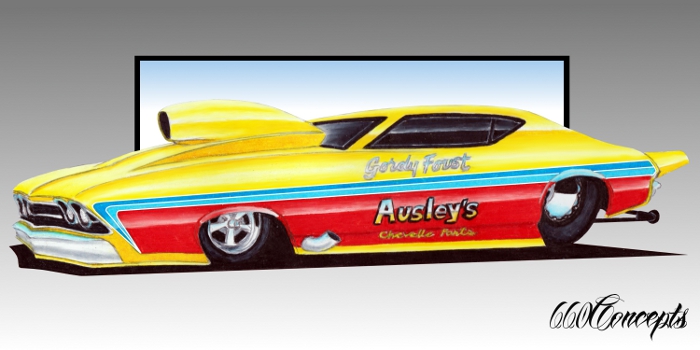 GORDY FOUST - While Pro Modified was debuting over in the IHRA, IHRA Top Sportsman Quick Eight pioneer Gordy Foust was busy blazing the trails on the Super Chevy circuit with a '66 Chevelle. We could see him in this sleek 1969 Chevelle. 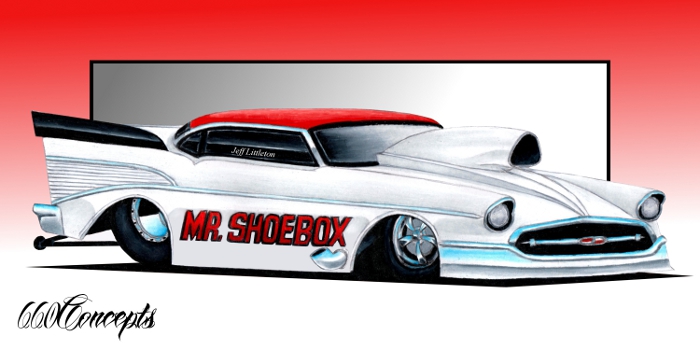 JEFF LITTLETON - Jeff Littleton was another one of those racers who helped to pioneer the Top Sportsman Quick Eight movement into a professional category, only to bolt over to the Super Chevy show. Littleton had fast cars, starting with his Pontiac Trans-Am and later a bad-to-the-bone Chevy II. However, it's the '57 Chevy he fielded which stole our hearts. 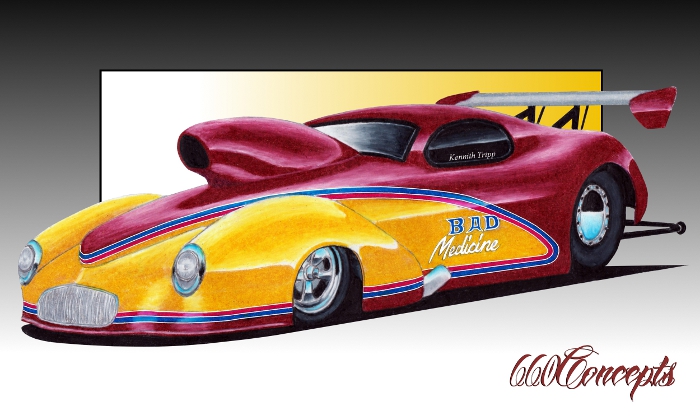 KENNETH TRIPP - This car came out about the same time as Bon Jovi's hit song "Bad Medicine." Substitute car lyrics, and you have a song that goes like this, "Your Coupe is like Bad Medicine, Bad Medicine is what I need!" The only thing missing from our rendering is the iconic skull and crossbones flags, but then again flags don't fare well at 250 miles per hour.