NHRA was named the Diversity in Motorsports Award winner Tuesday
evening at the Fox Theatre in Detroit during the 12th annual Urban
Wheel Awards, held in conjunction with the North American International
Auto Show.

The Urban Wheel Awards ceremony is the only official event honoring
African-Americans, Latinos and Asians during the North American
International Auto Show.

The 41-year-old Dixon drives for legendary drag racer-turned-team owner
Don “The Snake” Prudhomme and will compete under the U.S. Smokeless
Tobacco banner for 2008. The Indianapolis native has earned more than
40 final-round victories and he clinched consecutive Top Fuel Dragster
championships in 2002 and 2003.  His victory in Las Vegas at the 2005
SummitRacing.com Nationals moved him ahead of drag racing legend Don
Garlits on the all-time win list (third place). 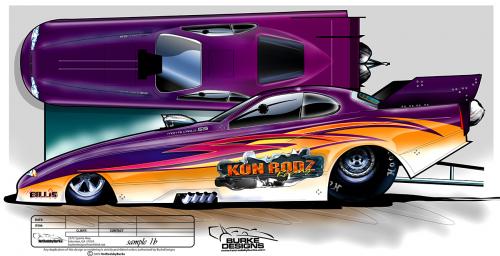 T.J Schippling will be taking over as the driver of the KonRods Top Alcohol Funny Car.

Schippling brings 17 years of drag racing experience to the team. He
will pilot a 2006 Monte Carlo flopper with Al Billes tuning.

The clock is rapidly ticking down toward the start of the 2008 NHRA POWERade
season, and in just a few short weeks some of the finest drivers in Pro Stock
will converge on The Strip at Las Vegas Motor Speedway for the third annual
Pontiac Pro Stock Showdown on Friday and Saturday, Feb. 1 - 2. The Pontiac Pro
Stock Showdown will provide teams with the opportunity for some intense
side-by-side competition, their first since last November's NHRA Finals, and
some all-important last-chance testing before they make their way west to Pomona
and the beginning of this year's 24-race campaign.

"The third edition
of the Pontiac Pro Stock Showdown at The Strip at Las Vegas Motor Speedway will
be the most exciting yet," said Chris Blair, LVMS' Vice President of Racing
Operations. "The best teams in the sport will take advantage of our perfect
racing surface and incredible weather conditions to produce record-shattering
performances."

"Pontiac is proud to once again be the title-rights
sponsor for the Pro Stock Showdown," said Fred Simmonds, GM's drag racing
marketing manager. "The Strip at Las Vegas Motor Speedway is a great venue and
the fans will get a terrific opportunity to see their favorite drivers in a very
accessible setting. Last year, every Pro Stock car that qualified for the
season-opening Winternationals was at the Pontiac Pro Stock Showdown, and this
event will give teams a chance to make some final adjustments before making the
short trek to Pomona."

GOODGUYS BACK IN DRAG RACING

After a one year hiatus, The Goodguys Vintage Drag Racing Association is back in
the event business.

After staging the country’s premier vintage drag races
for twelve years on the west coast, Goodguys is looking forward to bringing new
events to the Midwest. “It’s new territory for
us,” said Goodguys President Marc Meadors. “The Bader family at Summit Motorsports Park in Norwalk, Ohio
has indicated we should expect a great turnout of racers to the 7th
Blue Suede Cruise this September. We’re also looking forward to staging the
first-ever Goodguys/VRA event at Beech
Bend Raceway Park
in Bowling Green, KY. We’ve heard for years what a great
facility it is and are excited to start new traditions at each of these historic
venues. Of course the Hot Rod Nationals in Indy always rocks. It’s going to be a
great year and we look forward to giving vintage drag racers all over the
country some quality events to come race at.”

MCMILLEN ON THE RADIO

The sound of those words will ring clear in the minds of those
that have ever been to an IHRA race and had the privilege of listening to
Staging Stevie Letempt call "play-by-play" for Sportsman Racing. No one does it
with more enthusiasm than Steve Letempt.

Putting Staging Steve and the
"Gator Man" Terry McMillen on the same radio show this Wednesday night at 8PM
EST is something the world may not be ready for yet.

There once was a time when Scotty Cannon ruled the Pro Modified
division with an iron fist. He’s since found a new playground to bully.

The objective of this unique competition was for individual to tell a
war story, gain more votes than their opponent in the balloting. A
reader vote seeded the sixteen competitors participating and the
standard NHRA ladder paired them. Torco’s CompetitionPlus.com attracted
58,962 readers for the duration of the event.

All it took was a hint
from team owner Mike Ashley in an interview to start the fires of speculation
to burning.

“It's most likely going to be Frank Hawley driving
for now,” Ashley said. “Won't that be exciting to see Frank Hawley racing John
Force again?”

Hawley, a two-time NHRA
Funny Car champion under the tuning of Austin Coil, could possibly assume the
driving chores for a second Funny Car team under the Gotham City Racing
umbrella of Ashley and Roger Burgess.

Hawley says such a
proposition would be exciting, although it’s not an official deal.

Dexter Tuttle has been on the receiving end of Evan
Knoll’s drag racing benevolence and is very appreciative.

If Knoll had not stepped up early in the 2006 season,
J.R. Todd, Tuttle’s unheralded Top Fuel driver, might not have been the
unanimous rookie of the year selection.
Todd won three times, becoming a fan and media favorite along the
way.

It was a storybook ending to a season that was supposed
to last only 10-14 races.

“We weren’t chasing an Evan Knoll sponsorship, he just called us,” Tuttle
recalled. “He had a good relationship with (then crew chief) Jimmy Walsh and
Evan called after we didn’t qualify at Phoenix – one of the two times we didn’t
qualify in two years.  He said, ‘What can
I do to help you,’ and that’s how our deal started.”

Funny Car driver Mike Ashley told Torco's CompetitionPlus,com that
he plans to limit his driving participation in 2008 to that of piloting
his Pro Modified Camaro in partnership with Roger Burgess.

Ashley
said the demands of business and his longstanding desire to spend more
time with his business has inspired him to travel this path. He's most
likely looking to Frank Hawley as his successor.

"I think it's
time to concentrate more on my business, my family and my life," Ashley
said. "I plan to run only the Pro Modified this season."