THE HEAT OF THE DAY

How much is eight thousandths of a second? Not much, admittedly, but
under the right circumstances it can be huge. In two recent races, the
Pro Care Rx Nationals at Englishtown and the Mopar Mil-High Nationals
in Denver, heat may have played a pivotal role in the outcome of Pro Stock Motorcycle competition.

Old Bridge Township Raceway Park and Bandimere Speedway are similarly
configured in that the competitors approach the starting line by
rolling under the control/VIP suite towers. When the weather’s hot as
it was at both races, the shade afforded by the tower can be
unbelievably important to the motorcycle competitors. If the lines are
long, the racers whose motorcycles are in the shade ultimately end up
with a considerable advantage over those who remain out in full
sunlight.

WOMEN IN THE WINNER'S CIRCLE LUNCHEON

The Foundation is a non-profit educational organization
focusing on worldwide activities and programs for automotive safety and driver
development, especially for women who aspire to become race-car drivers. The
Foundation remains dedicated to continuing to train, advocate and educate for
diversity in racing until "opportunity" and "diversity" are no longer concerns
and are taken for granted.

To date, the foundation has trained over 230
female race-car drivers from 38 states and three countries through its Driver
Development Program and has contributed to Girls, Inc., the Wilbur Shaw Soap Box
Derby Hill in Indianapolis, and other charitable organizations. The WWCF has
also donated numerous autographed items for various charities throughout the
world.

Torco Race
Fuels has joined YNOT Racing and announced that they will make the first pledge
to support the challenge in any way they can.
At the end of the two event challenge, YNOT Racing and Torco Race Fuels
will formally announce, during a ceremony at the YNOT pit, the total funds
raised by the racers and sponsors. 100 percent of all funds raised will directly
benefit ALSAC St. Jude  Children's
Research
Hospital.

St. Jude Children’s
Research
Hospital is
internationally recognized for its pioneering work in finding cures and saving
children with cancer and other catastrophic diseases. Founded by late
entertainer Danny Thomas and based in Memphis,
Tenn., St. Jude
freely shares its discoveries with scientific and medical communities around the
world. No family ever pays for treatments not covered by insurance, and families
without insurance are never asked to pay. St. Jude is financially supported by
ALSAC, its fund-raising organization. For more information, please call
1-800-954-5499 or visit www.stjude.org 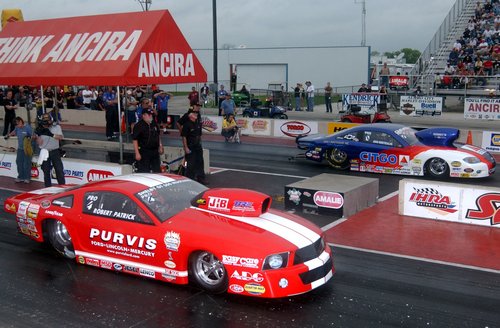 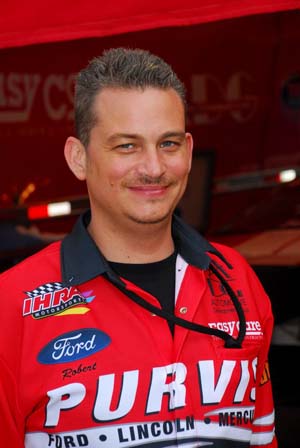 Robert Patrick has encountered more than his share of obstacles in drag
racing but in the days leading up to the IHRA Torco Sooner Nationals,
the IHRA Pro Stock racer suffered a loss that had him questioning more
than drag racing.

Patrick lost a friend, and a close one.

Cary
Coleman’s death left Patrick reeling from a setback that no test
session could overcome or that money couldn’t buy relief from.

Patrick
learned a lot from Coleman over the years about fitness and proper
maintenance of his body, but the most invaluable lesson – how to be a
friend – was what left a lasting impression.

THE REAL WORLD OF DRAG RACING

This is the first installment of what’s destined to become an on-going
series of short articles on Torco’s CompetitionPlus.com. There’s not
going to be a firm schedule of when these inclusions will appear, so we
hope you’ll keep an eye out for them in the future. We’re also hoping
that you’ll let us know whether or not you like it.

Drag racing is a dream world. We’re all so wrapped up in what we’re
doing that we sometimes forget that there’s life beyond the finish
line, and we’re determined to demonstrate that racers are about more
than just elapsed times and speeds.

In the coming months we’ll talk to more drivers, and will also include
mechanics, tuners and sponsors in our little very unscientific
studies. Finding out what drag racers like and dislike, know and don’t
know, is going to be interesting, so let’s get to it.

Dale Creasy is trying a second car on an experimental basis this weekend at the IHRA Canadian Nationals in Grand Bend, Ontario.

This second Creasy entry will be piloted by veteran Joliet, Ill. driver
John Lawson.  Many fans will recall one of Lawson's most memorable
races when his Mark Oswald tuned car defeated both John Force and Ron
Capps. The hometown crowd at the 6th annual NHRA Route 66 Nationals
cheered Lawson to an unlikely semi-final finish with a brand new
untested ride.

The one-race package that Lawson and Creasy have teamed up on is
something Creasy hopes will become full time. "John is a great guy,"
Creasy said. "He drove for my dad years ago. He's a great family guy.
We're going to have some fun this weekend. Who knows maybe we can find
a way for John to be back out here full time."

"You can't take anything for granted out here," Creasy said as he
loaded the transporter for the trip to Canada. "Everyone has been
talking about Creasy and Wyatt, Wyatt and Creasy. Well, Terry Haddock,
Bob Gilbertson, Andy Kelly and everyone else will have something to say
about this championship before it's all over. We've had a pretty good
run, but we'll have to stay on top of our game if we hope to stay out
in front."

The top
nitro-powered cars in the world will be competing August 3 – 5 at Knoll-Gas Motorsports
Park at US 131 south of Grand Rapids, Mich., during the Torco Racing Fuels
Northern Nationals, the seventh event of the Knoll-Gas Nitro Jam™ Drag Racing
Series. The weekend will include appearances by IHRA’s current stars, as well
as some of the best NHRA crossovers, including J.R. Todd, Melanie Troxel and
Clay Millican in Top Fuel and Mike Ashley and Gary Densham in Nitro Funny Car.

“This will
be an amazing nitro showcase, an unofficial all-star game, for Michigan racing fans to enjoy at Knoll-Gas Motorsports
Park at US 131,” IHRA
vice president of marketing Jim Marchyshyn said. “NHRA’s best will come over
and take on IHRA’s best in the two nitro categories. We’ll also be running the
Torco’s CompetitionPlus.com Pro Modified Shootout featuring the world’s
quickest door cars.

“We applaud
the track management for increasing the amount of spectator parking after
nearly running out last season. We are going to need it this year,” added
Marchyshyn.

Todd, a
five-time NHRA event winner currently fourth in the point standings, will be
making his return to IHRA. He competed during the Northern Nationals in 2006
and actually began his career racing with mentor Bruce Litton, who is currently
second in IHRA point standings.

Barklage Racing went to Indy on a mission to bring home another big Barklage
win.  The team was struggling with the
fresh emotions of the tragic accident at the Barklage shop earlier in the week
that resulted in the death of Joe Bellamy.
Although the team had many obstacles to overcome, the team was on top at
the end of qualifying.  Sitting No. 1 was
Zach Barklage in his 1957 Chevy with a top ET of 6.17, but not far behind him in
the No. 2 spot was substitute driver Scott Palmer in Cody Barklage’s Pontiac GTO
posting an ET of 6.22.

“My car was pretty quick all
weekend,” said Barklage.  We went out to
win a race, and taking the No. 1 qualifier position is always the first
step.  We went to Indy ready to step-up
our game, and now we know we had the car to beat.  I am sorry my brother wasn’t there to give me
the usual tough competition, but Scott Palmer is a good driver.  He was the No. 2 qualifier, and racing well,
so I think this proves we have two excellent cars.”

Despite Cody Barklage going into
Indy tied for first in Nitro Coupe, he did not compete.  Racing in his place was Scott Palmer, of
, driver of the O’ Reilly Auto Parts /
Nitro Plate Top Fuel Dragster.  Although
Palmer is best known for his time in Top Fuel, Palmer has several years
experience in a door car.

"Nitro Nick" Boninfante, who last campaigned a nitro Funny Car in 1991,
announced that he, along with his sons Nicky Jr. and Rob, are putting together a
replica of his 1977 Mustang II Funny Car that will race at select nostalgia
Funny Car races in 2008.
Boninfante Sr. started racing his series of U.S.
Male Funny Cars in 1971.  He originally campaigned an alcohol Funny Car car
until he switched to nitro in 1983 and he continued racing until 1991 when he
took a step back to concentrate on his clutch business.  Since then Boninfante
Performance Clutch Parts has grown into a multi-million dollar business that
supplies the majority of Top Fuel and nitro Funny Car teams with discs,
floaters, flywheels and pressure plates.
"Since I quit racing it's always been the back of
my mind that I'd like to get back out there," Boninfante Sr. said.  "But with
the enormous costs of racing a car in the "big show" and with the increasing
popularity of the nostalgia Funny Cars it was a easy decision for me to
make.  Although we did run a lot of national events back then we did a lot more
match racing which is a lot more fun and a lot less pressure so this is the
direction we decided to go."