Legendary NHRA drag racing driver and crew chief Dick LaHaie, a 65-year old
resident of Lansing, Mich., has decided to return after a brief retirement to
the world’s quickest and fastest motorsport as a tuning consultant for Kalitta
Motorsports effective immediately it was announced today by the Ypsilanti,
Michigan-based team. LaHaie will begin his new responsibilities with drag racing
patriarch Connie “the Bounty Hunter” Kalitta’s team of four nitro-fueled race
cars this weekend, May 4-6, at the O’Reilly NHRA Midwest Nationals at Gateway
Int’l Raceway, just outside of St. Louis. LaHaie’s newly created position will
encompass his guidance on all Team Kalitta entries.

LaHaie’s last stint in the NHRA
POWERade Drag Racing Series was with Don Prudhomme Racing where he guided Top
Fuel ace Larry Dixon to consecutive Top Fuel World Championships in 2003 and
2004. LaHaie retired as Dixon’s crew chief following the 2005 NHRA
season. In his legendary drag racing career, LaHaie amassed 15 event wins as a
driver and 46 wins as a crew chief, which helped place him in the No. 31
position on the list of the NHRA’s top 50 drivers of all time. He won the NHRA
Top Fuel championship as a driver in 1987.

CANNON RECOVERING FROM BACK SURGERY 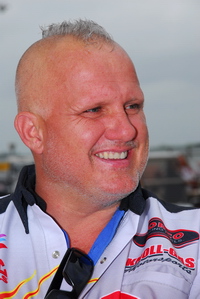 For Scotty Cannon the phrase “the spirit is willing, but the flesh is weak”
would be an accurate description of his current physical status.
Cannon, driver of Evan Knoll’s Seelye-Wright Top Fuel
dragster, suffered a back injury during the second round of qualifying at the
recently completed IHRA Spring Nationals in Rockingham, NC. He finished the
weekend despite suffering two ruptured discs.
Cannon underwent surgery last Friday at the Charlotte Spine
Clinic to repair the damage. This marked his second back operation since
1997.
“I’ve found out just how painful a ruptured disc can be,”
Cannon, who is still bed-ridden in his Lyman, SC., residence said. “I was in
terrible pain at the race track and I just tried to do everything I could to
make it through.
“When little Scott won on Sunday, I think it was the most
painful experience in the winner’s circle that I’ve ever experienced. It was so
bad over the course of the weekend that I didn’t make the last qualifying
session and my crew had to help me in and out of the car. I knew I had a bad
problem that wasn’t going to fix itself.”

J.R. Todd’s name has
surfaced in connection with a future Funny Car ride but there’s one problem –
no one has asked him if he wanted to.

“A couple of the top seats
in the class have opened up,” Todd said. “They have contacted me about it. If
someone was to, it would be worth looking into. I don’t know. I’d consider it.”

Todd’s name has surfaced
as a possible addition to the John Force team and although Force praised the
talented Top Fuel driver, he pointed out that Todd would be a worthy candidate.
His name has also floated in certain circles as a potential Gary Scelzi
successor.

Four-time NHRA Top Fuel winner Rod Fuller will
compete behind the wheel of the yellow-and-black Caterpillar dragster for the
second time this season. David Powers Motorsports and Fenton, Mo.-based Fabick
Cat have partnered to back the Fuller-driven rail during the 11th annual
O’Reilly Midwest Nationals, May 4-6, at Gateway International Raceway, team
owner David Powers announced today. Linn State
Technical College, located in Linn, Mo.,
also will be involved during the weekend.

The
relationship between David Powers Motorsports and the Cat dealer groups is
designed as a pilot program to increase technician recruiting. Caterpillar
dealers are experiencing a shortage of technicians, and NHRA drag racing offers
a technician-rich recruiting environment to find qualified candidates with
experienced mechanical backgrounds. Fabick Cat is
the authorized dealer for Caterpillar equipment, prime and stand-by power
systems, parts and service, compact construction, and rental equipment for 99
counties in southern Missouri and Illinois. David Powers
Motorsports partnered with Caterpillar and Houston-based Mustang Cat during the
Houston NHRA event in late March.

“After the great success with the Caterpillar program in
Houston, we’re now to do our second venue, this
time in St.
Louis,” Powers said. “For all the parties involved,
Caterpillar and Fabick Cat, our hopes are to create the same result that we
experienced for Mustang Cat. We learned from the Houston event and we have a few new ideas for
this program.”

"Museums shouldn't be dusty places full of stuff just sitting around,
kind of like an abandoned yard sale. Museums should be lively,
interactive places where old stuff is used to learn new things." Those
are the words of Tony Thacker, executive director of the Wally Parks
NHRA Motorsports Museum, presented by the Auto Club of So. Calif.
That's why he's excited about Wally's Garage, the just-opened
interactive area within the Museum.

According to Thacker, "the idea behind Wally's Garage was to have
a place in the Museum where our staff could work on vehicles that needed
minor restoration and where, when appropriate, the public could come and
watch and be involved. They can ask questions but not lift wrenches!"

The 2007 National Street Car Association season is off and running, and we have photos to prove it!

As the 23-race NHRA POWERade tour leaves Atlanta Dragway and heads north up I-75
for next weekend's event outside St. Louis at Gateway International Raceway,
two-time NHRA Pro Stock champion Jim Yates finds himself at a racing crossroads
that many drivers have faced before, competing with others for the precious
funding that is the lifeblood for any professional racer. But the veteran
remains upbeat and optimistic as he prepares his Pontiac GTO for a racetrack
where he's had success in the past, besting Allen Johnson for the win in 1999 as
well as finishing runner-up to Warren Johnson both in 1997 and
2001.

"Contrary to some reports, I'm not quitting or retiring," Yates
said. "I want to race, (son) Jamie wants to race, (wife) Toni wants to race,
Grumpy (engine builder Bill Jenkins) wants to race. We love to race and we think
we have something good together.  Unfortunately, not only do you need half-inch
wrenches in your toolbox, you also need money in your toolbox. It's no secret
that to run at the winning level of Pro Stock it takes the proper funding and in
the past we have proven that we've got the talent to run with the best cars out
here.

"We had some very positive opportunities lined up at the end of
last year, but, unfortunately they just didn't work out. As a result, it left
our program in a hole financially.  We still love what we are doing and we are
still the same talented team that has won POWERade championships and national
event races in the past. Bill (Jenkins) continues to improve the horsepower in
our engines every week and our new Pontiac GTO is working better than ever.
We're really excited about our program and the potential we have and we'd love
to have the money to stay out here and race."

This weekend's fourth running of the annual Snap-On Nitro Champs will be the
last time that the quickest Alcohol powered Dragsters and Funny Cars are seen in
Sydney for the 2006/2007 season. As always, regardless of where these cars are
running they always put on one hell of a sho w and this weekend is definitely
not going to be an exception to that rule.

Perhaps the most exciting
thing about this class is that Dragsters and Funny Cars have the opportunity to
duke it out to determine who really is king of the sport.

According to
the racing that has already taken place this season, it would be fair to say
that the Dragsters are definitely the Kings of the Sport. This conclusion has
been the forced truth all because of the efforts of Wayne Newby, pilot of the
Gatorz eye-wear sponsored Top Alcohol Dragster.

Tommy D'Aprile will roll out his brand new Vanishing Point Race Car at the
ADRL's  Camp Motorsports Georgia Drags, May 4-5 at the South Georgia Motorsports
Park in Valdosta. The IHRA's 2006 Pro Rookie Driver of the Year is looking
forward to racing this weekend and a little extra television time for his
sponsors.

While the Sir Thomas Inc. / Access Able Mobility 1963
split-window Corvette will be making its first competitive passes of the year,
D'Aprile hopes the car will be competitive once the car is out of the trailer.
"We want to get a few runs under our belt. It's the same crew and same tuner
that we used to finish fifth in IHRA points last year."

D'Aprile will
utilize journeyman racer and tuner Quain Stott to turn the wrenches. "I keep
teasing Quain and telling him I'm going to find out just how good of a tuner he
really is," D'Aprile joked. "This is an outlaw event, so it's not exactly the
same set up we would use at other events. But, I have all the confidence in
Quain and my guys to make this car competitive from the start. This is our first
outing since October, we just want to go out and have some fun."

J.W. Performance Transmissions to sponsor “Happy Hour” with a live DJ and Pit
Pro Golf Cart Challenge during the JEG’S US Open Bracket Championship presented
by Race craft Chassis and LB Trailers, The event will be held May
31st to June 3, 2007 at Tri State Drag way in Hamilton, Ohio.

The Live DJ and Pit Pro Golf
Cart Challenge will take place Saturday evening following the 20K bracket
race.  For details on the event contact
Mike Fuqua at 615-207-4152, Dave Szerlag at 517-376-0361 or the track at
513-863-0562.  Come race with J.W.
Performance Transmissions at www.racewithjw.com to learn more about
J.W. Performance Transmissions Inc.