PINKS: All
Out, the popular spin off show to SPEED
hit reality series, PINKS, will
be shooting episode five at Rockingham (N.C.) Dragway on Saturday, April 7.
Hosted by Rich Christensen, PINKS: All
Out is an all-day, open competition where more than 300 grassroots
drag racers will be competing for a $10,000 grand
prize.

Called ‘the hottest car
show on television,’ by Hot Rod
magazine, the PINKS: All Out
production begins with time trials in the morning, selection of finalists in the
afternoon and PINKS: All Out 16
eliminations beginning at dusk. More than 20,000 people attended the two most
recent PINKS: All Out shoots at
Houston Raceway Park
in Texas and Moroso Motorsports Park in southern Florida. Pullin Television, out of Los Angeles, produces both
this show and the original PINKS,
which as a brand, made its debut in February of
2005.

In this era of multi-car teams and well-funded racing budgets, NHRA Pro Stock
driver Mike Edwards seems to quietly be leading the charge as a one-car wonder
in his class.  As a single-car team, Edwards finished fourth in the final NHRA
POWERade points standings last year, and the Oklahoma native is coming off a
semifinal appearance at Gainesville (Fla.) two weeks ago and sits third in this
year's early points standings as he prepares his Young Life Pontiac GTO for this
weekend's 20th annual O'Reilly NHRA Spring Nationals at Houston Raceway Park on
March 30-April 1.  Edwards is the defending event champ at Houston as he
narrowly defeated fellow Pontiac driver Jim Yates in last year's final round for
his first win in nearly four years.  Edwards visited the winner's circle again
at St. Louis and also had runner-up finishes at last year's season-opener at
Pomona (Calif.) and Dallas.

THE HIGHS & THE LOWS FOR DENSHAM 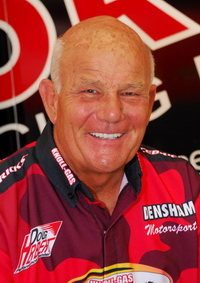 Gary Densham's successful weekend activities have been overshadowed by the tragic loss of Eric
Medlen. As a former John Force Racing driver who worked closely with the Medlen
family, the loss of Eric hit home especially hard for Densham.

“I knew Eric for a long time, and whether it was being a crew
member, roping bulls, or driving a race car, he went at it full blast,” Densham
remembered. “Force gave him the opportunity to drive one of these cars, and he
had the potential to be one of best for years to come, but unfortunately we will
never find out.”

DSR will have its U.S. Army Top Fuel Dragster, two U.S. Army Pro
Stock
Motorcycles and the Brut Revolution Dodge Charger Funny Car on
display.
Food, vendors, and entertainment will be available.  Music will be
performed
by the '70s rock group ³JJ Dynomite.² Dynomite is known for its
impressive
covers of Led Zeppelin, Deep Purple, Bad Company, and many other
acts of
that era.

The
relationship between David Powers Motorsports, Caterpillar and the Cat Dealer
Groups is designed as a pilot program to increase technician recruiting.
Caterpillar dealers are experiencing a shortage of technicians, and NHRA drag
racing offers a technician-rich recruiting environment to find qualified
candidates with experienced mechanical backgrounds. Mustang Cat is the southeast Texas authorized sales,
parts and service dealer for Caterpillar construction equipment and
engines.

The San Antonio weekend marked the national event debut of the connection between Awesome
Motorsports and new engine builders Reher-Morrison. While David Reher has long
been regarded as a dyed-in-the-wool 500-inch Pro Stock racer and anti-Pro
Modified gear-head, it’s clearly evident that he’s jumped in feet first into a
new working relationship with Shannon Jenkins and Mike Castellana.

LOVE AND SACRIFICE FOR RACING

Though Jeff Dobbins recently acquired backing to compete in at least a few IHRA
Pro Stock events this season, it doesn’t mean everything is easy all of a sudden. In an
act of true sacrifice, Jeff’s wife Cindi gave up her plane ticket in exchange for a 24-hour ride in the team
hauler. She didn’t just ride though: she also took shifts driving the rig on the
long trip to central Texas, returning to the same site where Dobbins suffered a
nasty crash in 2005.

SHELBY COBRA OF A SPONSORSHIP

Alcohol Funny
Car driver Tony Bogolo, the 2003 Texas Nationals winner from Hamilton, OH,
struggled in his first two qualifying passes of 2007, but to be out on the track
at all is a positive. Bogolo currently has backing for one race courtesy of
Dynatek Racing, an exclusive OEM-style fuel injection system supplier and
distributor for Superperformance and their Shelby Cobra replicas.

Raymond Commisso snatched the No. 1 qualifying position away from
Scott Cannon on the last run of the session, registering a 3.962 to Cannon’s
3.963 in the Steelback Beer ’67 Camaro. After extensive off-season testing with
the most recent IHRA rules, Commisso was thrilled with the pole position.