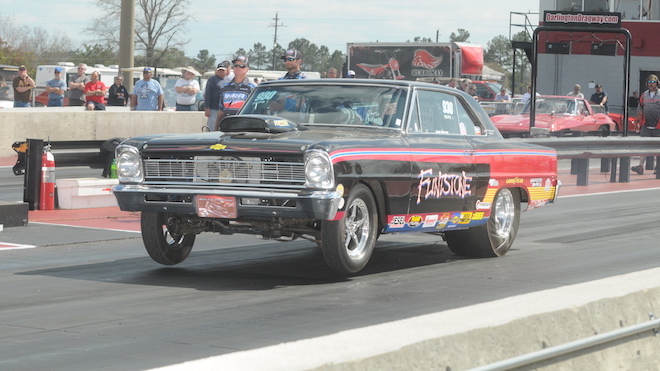 "My whole family's involved with IHRA, and every weekend, I get to spend time with them while we're racing," Barczy said. "My grandpa's here with us – the main thing is I get to spend time with my family; driving's just a bonus, and getting to go fast is another bonus. Racing with my family and spending time with my grandpa when we work on the car makes a lot more memories for later on in life. It's pretty important."

Barczy and his grandpa have been tight since, well, since Josh was born. The two have been mostly inseparable when it comes to the family hobby, but since the beginning, Barczy has had one focus.

"When he was a little bitty kid, that's all he wanted to do – drive that car," said Grandpa Jimmy Flynt, 83, who raced in IHRA from 1984-2012 when Barczy took over the ride. "He helped me work on it when he was a baby. Every week he'd ask if he could drive it. When he turned 16, I figured it was about time to let him do it."

"It's pretty special to drive my grandfather's car – it's a car that's been in IHRA for a long time," Barczy said. "There's a lot of history and family history behind it. All of my grandpa's friends called him Flynt-stone; one of them said he'd pay him if he put it on the car. It's spelled different because of the cartoon. Racing together kind of brought my family even closer together."

But don't think, even for a second, that Barczy driving grandpa's car is only a family thing. Barczy's got skill. Earlier this season at the Darlington Dragway IHRA Summit Sportsman National Championship event, Barczy was the No. 1 qualifier and reached the third round in the weekend's final race.

"First day at Piedmont (Piedmont Dragway in Julian, N.C. just south of Greensboro) he was real good," Flynt said. "I had it real loose, and it went straight up in the air. He said he wasn't expecting that. Next time, we tied it down a little bit, and he went on down the track – he was perfect that time. He's real relaxed in there, and it's just natural. That's all there is to it, but drag racing is all he's ever wanted to do. I wasn't as good as he is – I won a lot of races; we won everywhere, but he's done a lot better than I ever did. He has driving skill."

The IHRA community is starting to realize the guy can drive. After winning rookie of the year honors in 2013, Barczy was the Classic Gear Jammers champion the next year racing the series throughout the Carolinas, and this year he's making the Flintstone car look good in IHRA Super Stock. He works early mornings at UPS and attends Forsyth Technical Community College in Winston-Salem, N.C. pursuing an associate degree in welding, but if all goes according to plan, he may not need to weld forever.

"I'd love to turn pro," the grandson said. "My dream is to be a Pro Stock driver and get behind a 500 cubic inch hard-turning car going 215-220 mph. That would be awesome getting to shift gears like that. That's my number one plan – will it happen? I don't know. You never know. The right person could see you, and that's all it takes."