If you were lucky enough to be alive in '65 and paying attention, you may well have experienced the golden-est single season of drag racing's Golden Age — and of every era since. This year was also among the deadliest ever, particularly for dragster drivers: Among the fatalities reported in the weekly drag rags were Denny Miliani, Lou Cangelose, Tex Randall, "Q-Ball" Wale, Charles Minor, Leon Hamel, Dave Dangerfield, and Gary Taylor. Unknown numbers of lesser-knowns also perished at the many obscure tracks operating under media's radar.  (See Mel Bashore's comprehensive list at DragStripDeaths.com.)

Not coincidentally, quarter-mile performance improved at rates never seen before, and rarely since. "Stocker" fans amazed in January by altered-wheelbase, carbureted Dodges and Plymouths smashing the 10-second barrier saw elapsed times plunge to 8.63 by November, when Gary Dyer and "Mr. Norm" Kraus stormed Lions Drag Strip with the former Color Me Gone factory car, now sporting a blower and nitro. This type of vehicle was still so fresh and transformative that the sport had yet not settled on a common name; in print, the new term "funny car" was still expressed just like that, all lower case and sporting quotation marks. At the NHRA Nationals, some sponsored Factory Experimentals disrupted traditional sportsman racing by intentionally moving into altered and even dragster classes due to some disadvantage favoring a rival automaker's F/X-classified team.  These pros' success at "downclassing" changed the face of Competition and Modified Eliminators forever more.

However, the world's winningest wire-wheeled car was Roland Leong's Hawaiian, a near-duplicate of Kent Fuller's feared Greer, Black & Prudhomme rail. The reunited combination of chassis-builder Fuller, engine-builder Keith Black, and pilot Don Prudhomme prevailed at both of NHRA's biggest, oldest national events, the Winternationals and Nationals. In between Pomona and Indy, the Hawaiian also won more than its share of open events and was practically unbeatable in nationwide match races. The final Drag World of 1965 broke the shocking news that the Snake would quit Roland to take over the B&M shop car from Kenny Safford, retaining Dave Zeuschel as tuner and tutor.

The United Drag Racers Association, the most-effective drivers' union in history, grew to 1200 dues-paying members but suffered from class warfare and irreparable damage from a failed "wildcat" strike called by individual members Frank Cannon and Woody Gilmore at Lions. At issue was manager C.J. Hart's lowering of the usual $500 winner's purse to $300 on December 4, a night when Chris Karamesines and Tom McEwen were each guaranteed $1000 to match race. (After all but a few of his Top Fuel competitors decided to race, boycott leader Cannon called them "finks" to reporters.)

Last but not least-lasting, Chrondek successful tested dial-your-own-handicap racing this season at Carlsbad (Calif.) Raceway, under the direction of Jim Nelson, longtime tech adviser to NHRA and half of Dragmaster Co.

Additional highlights and lowlights are illustrated by the clippings on these pages. Of the three national weeklies, Drag World is getting the lion’s share of space here for delivering consistently excellent reporting throughout 1965—and because the controversial tabloid would all too soon be sold twice and become AHRA’s house organ, as we’ll see in upcoming episodes of Drag Rags. 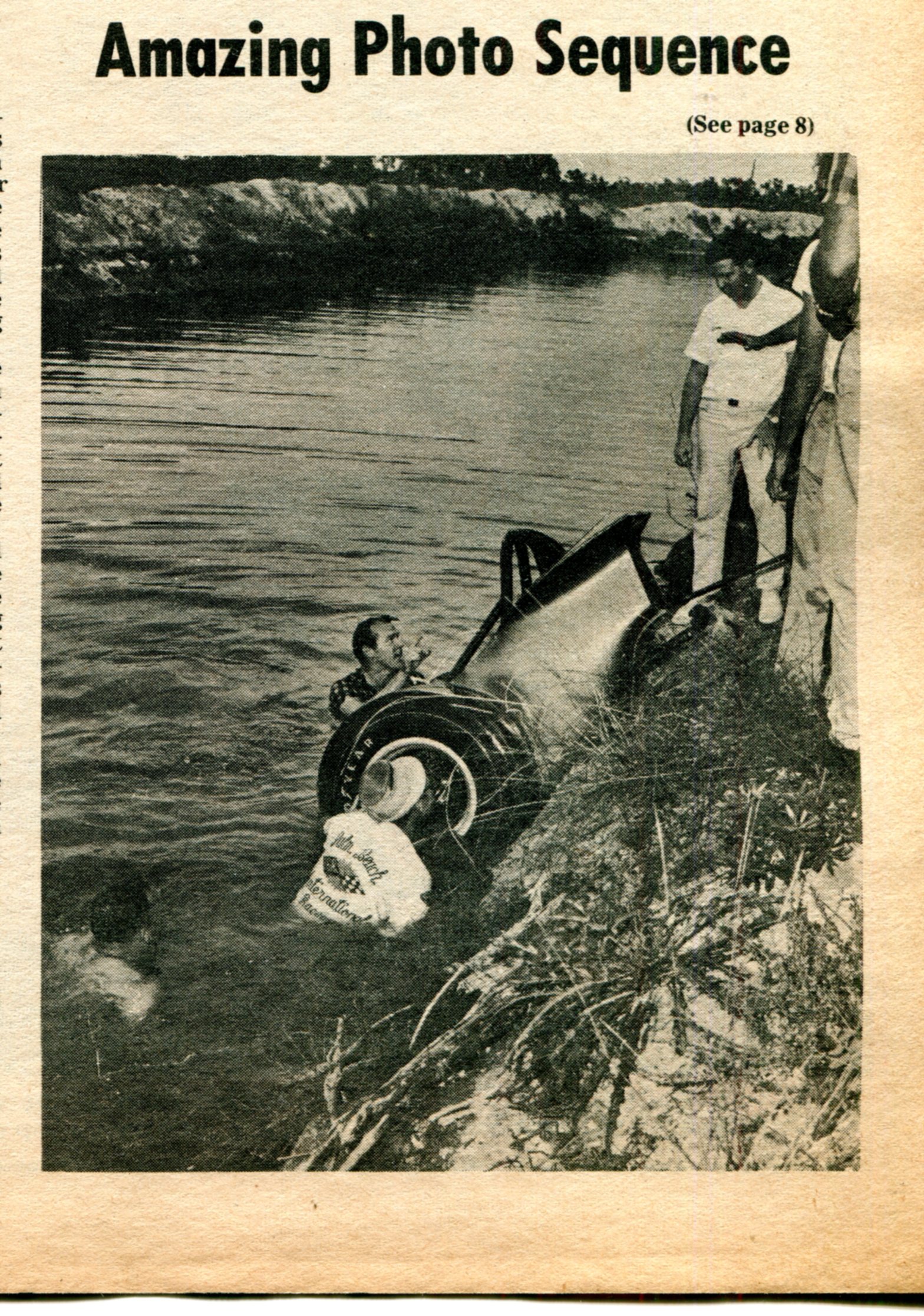 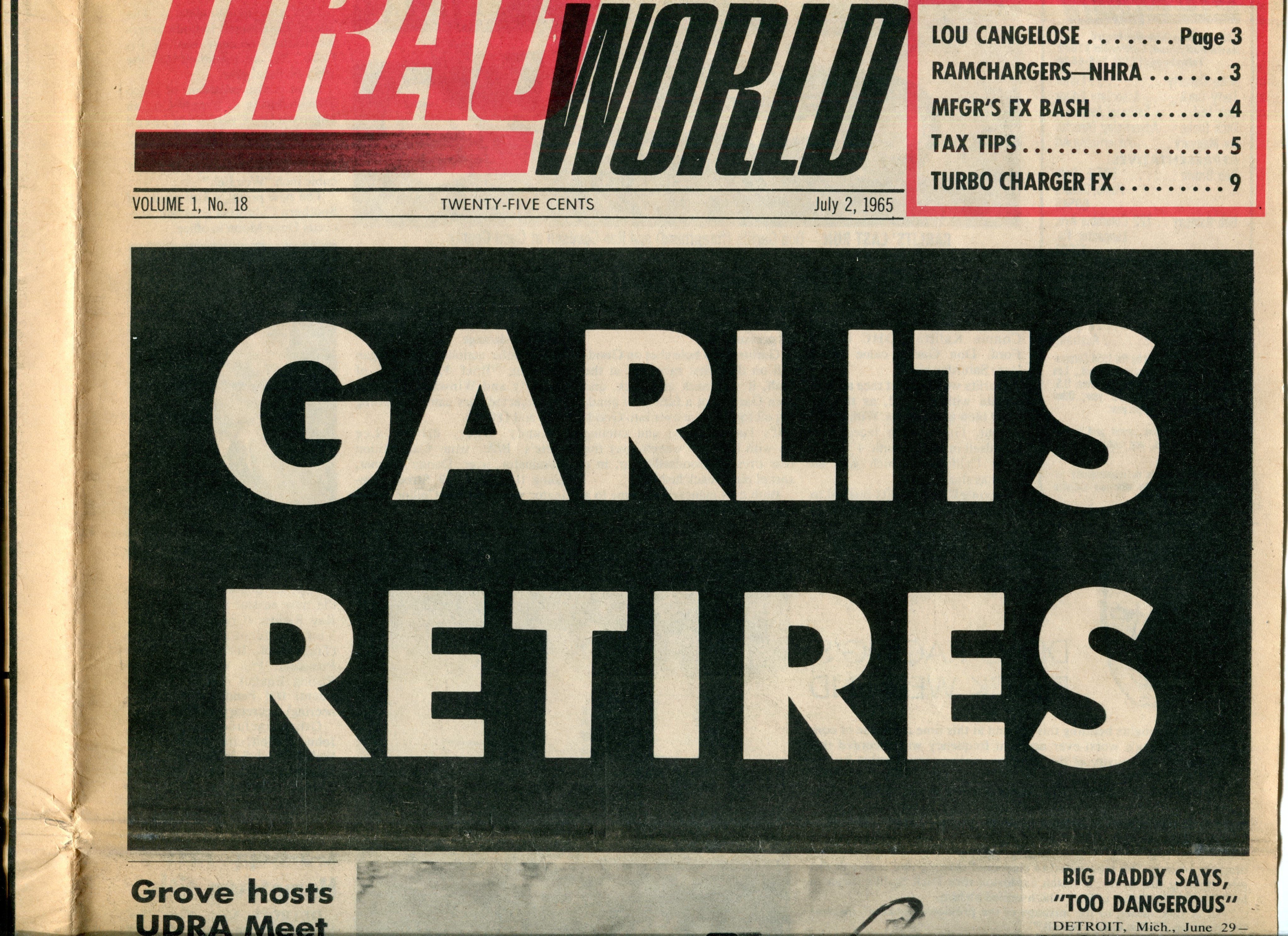 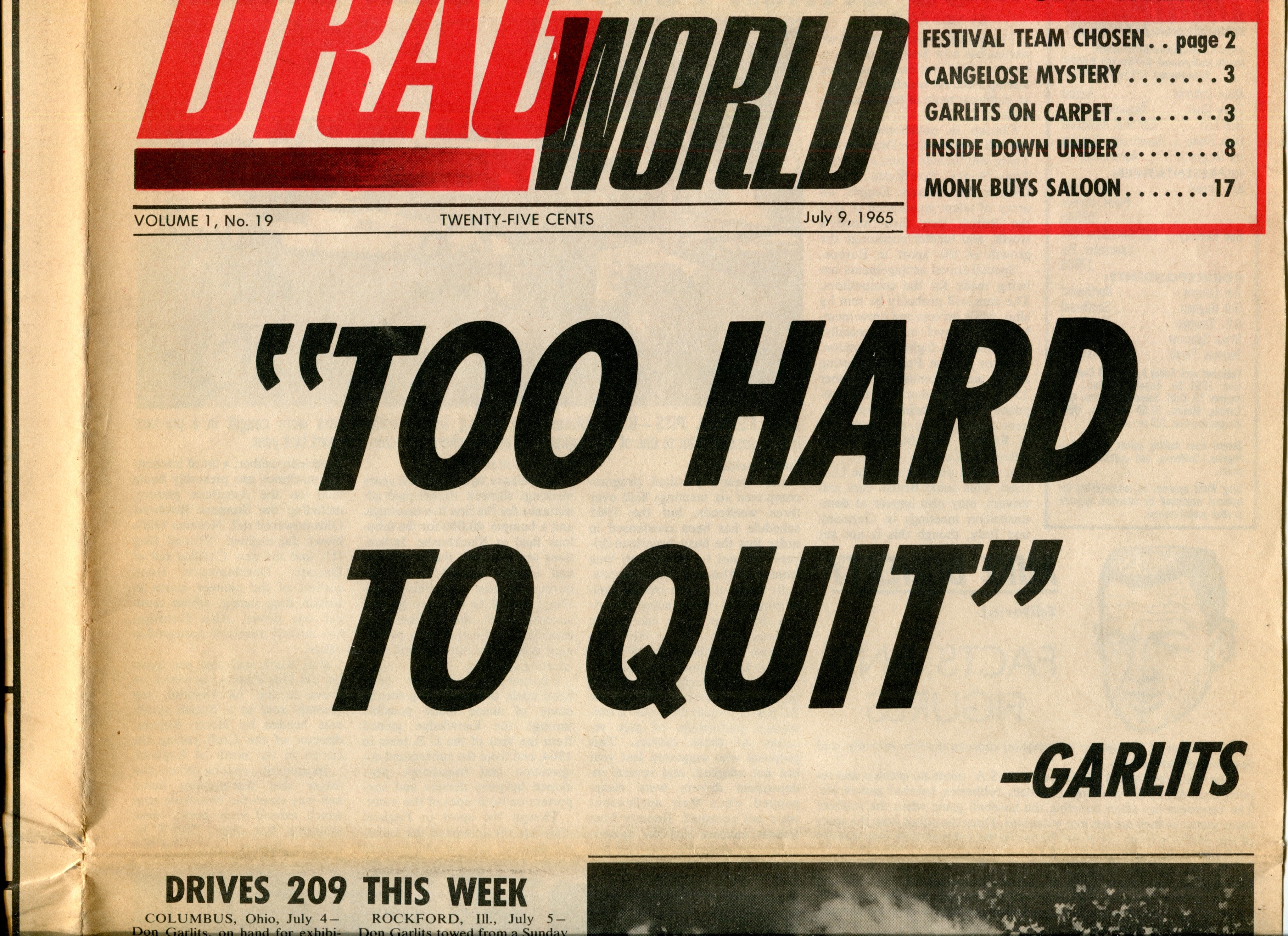 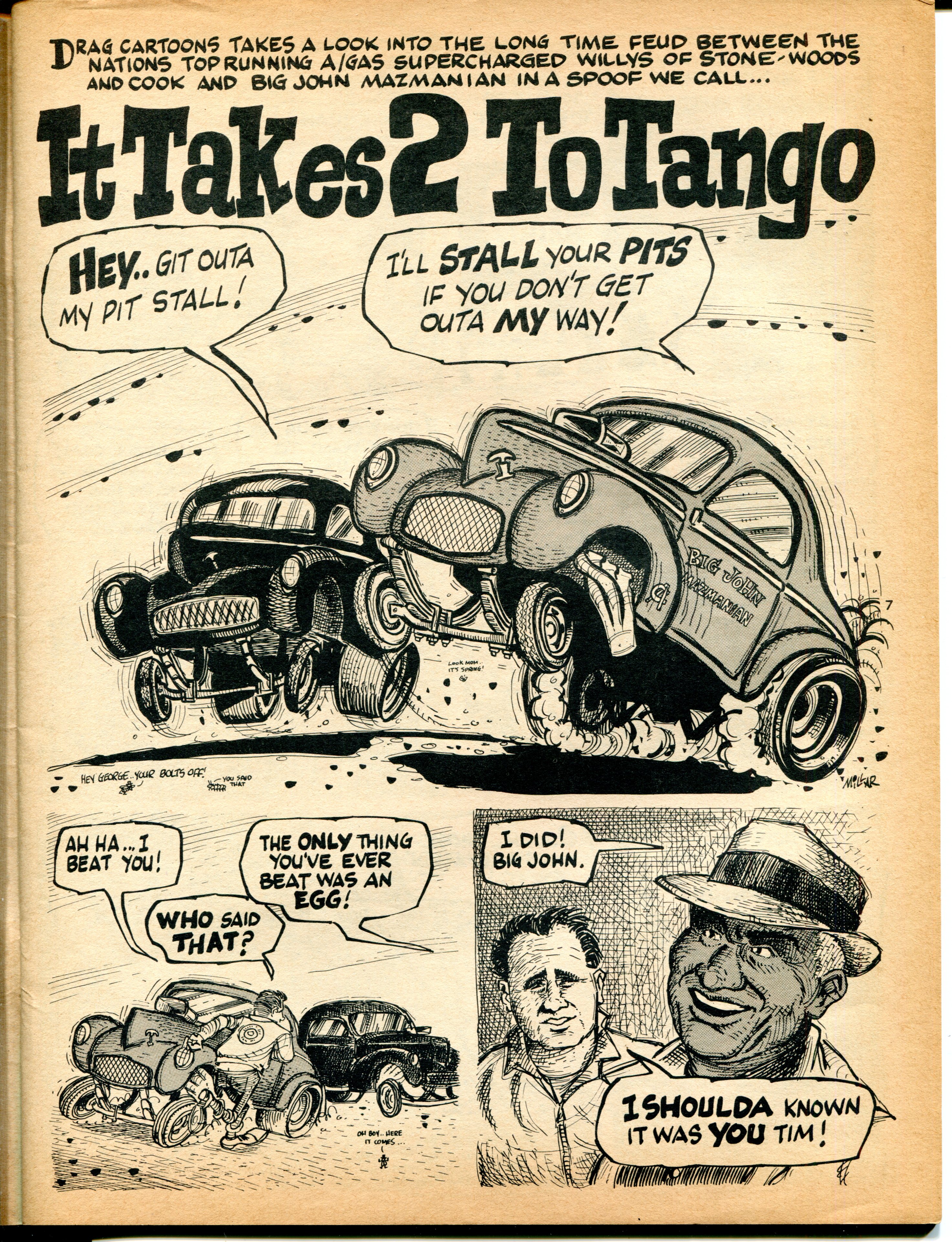 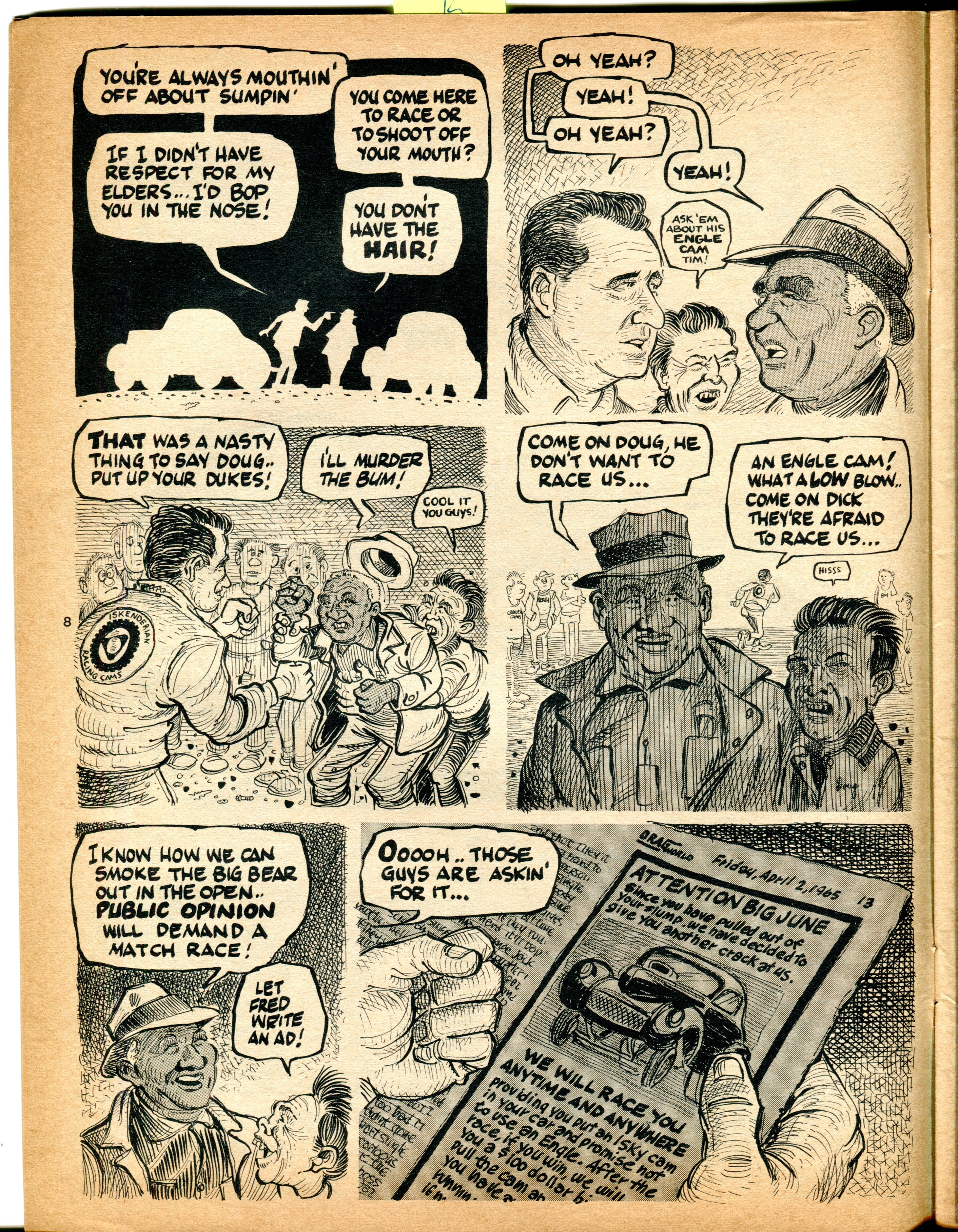