JACK WYATT HAVING FUN WITH HIS OWN HOT ROD 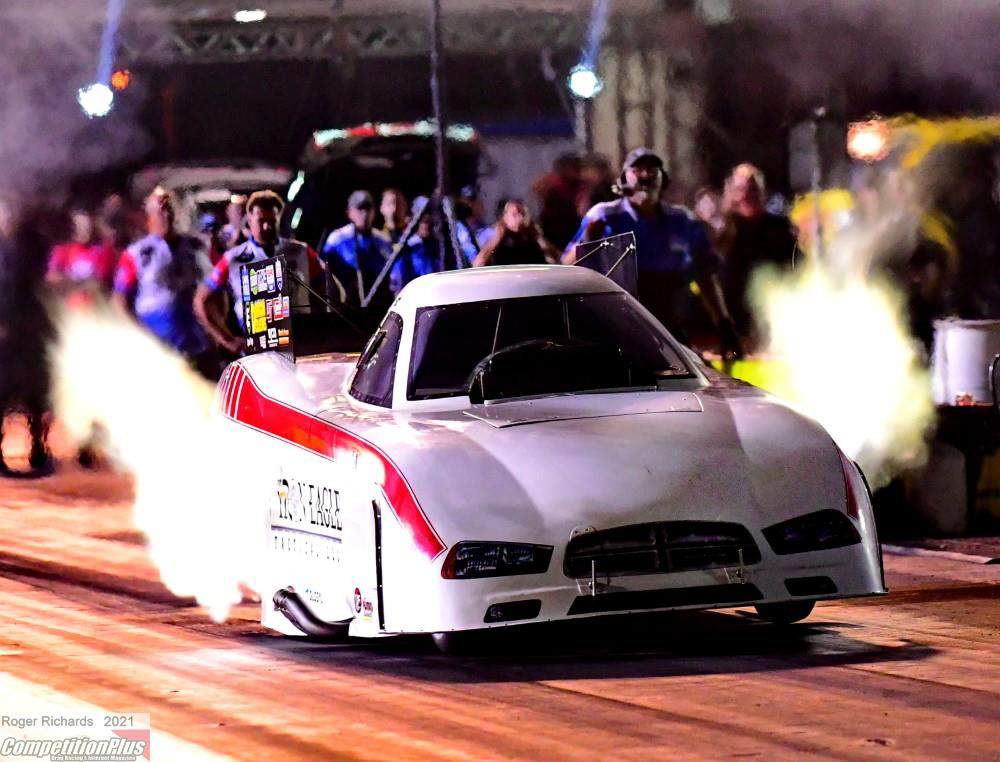 Jack Wyatt, who for years has run his IHRA and NHRA Funny Car operation out of his Seymour, Iowa, race shop, has experienced broken motors before. But a couple of weeks ago, the veteran owner-driver was on his way to World Wide Technology Raceway at Madison, Ill., near St. Louis. But that time, the broken motor was on his tow vehicle.

“We were going to run St. Louis, and I broke the motor in my tow truck and we couldn't get there. So we've got another truck to use for here because they're still working on mine. This was a 12-hour drive, close to home,” Wyatt said.

But, he said, this will mark his final appearance this season: “This is it. This will be it. We ran Denver and Topeka [in NHRA competition]. We also ran the World Series of Drag Racing, at Cordova, Ill.”

Wyatt said he and his volunteer crew are “just trying to run once in a while. I still go out and help other teams, start-up teams. I went back and helped Clay Millican, trained crew guys a couple of times and got them started. The last one was with [Doug] Foley. I went down and helped them get crew guys trained and started up and get that deal going. Then just mainly just doing that and running my own hot rod once in awhile, whenever I can afford to.”

That’s getting harder and harder to do, though.

“This inflation is going to get us. I come down here, and you can't even buy a hundred gallons of fuel for $300. Come on. So that ratio is getting all out of whack,” Wyatt said.

“So it's going to get to the point where the parts cost so much and travel expenses, motels cost more, everything else. Well, then there's not enough coming in. I’ve already got crew guys . . . I go, ‘Hey, look, there's no more. We're back in the ’70s again. I can't pay you guys. I'll feed you. I'll give you a motel and a pillow to lay your head on. Other than that, it's back to the 1970s.’ We hit the reset button,” he said.

“So we're going to race like that. Even my match races, I had to cut back on the price of those because of that. So I'm getting paid less, but everything's going up more. So the ratio somewhere has got to adjust. Next year, who knows?

“But I think that we got really good viewership on TV. So hopefully some more sponsorship stuff will start heading our way,” Wyatt said.

For example, according to Jeffrey Young, the NHRA’s vice-president of marketing and communications, the recent DeWalt Carolina Nationals at zMAX Dragway benefited from an excellent time slot.

Young said the event “that ran adjacent to FOX’s NFL Singleheader delivered 1,452,000 viewers, good for the most-viewed NHRA telecast on record. The telecast peaked at 2,242,000 viewers.”

And that’s what gives hope to the small-budgeted racers such as Wyatt – that and the fact that Texas Motorplex owners Billy Meyer, his daughter Christie Meyer Johnson, and General Manager Andy Carter “wanted to make this a bigger race” and “well, he stepped up.” And this Stampede of Speed FallNationals, Wyatt said, is a rallying event.

“What we need to do is we got to support something like this. I was actually going to go to St. Louis and it was going to be my last race, but then I go, ‘OK, well, we'll come down here,’ because he steps up. Somebody needs to, to keep this thing going. He should really take a lot of credit for sticking his neck out like this. That's great.”

He said some racetracks have decided to cut back, which, Wyatt said, means that “the fans don't get as much, ticket prices go up, less show, there you go. If we keep that up, that's not very good for the sport. So we got to do whatever we can. So if everybody cinches their belt up and we all chip in, it’s going to survive.

“The operating cost is going up. So we have to have more money into the sport and that's what it is. Well, if you got the viewership on TV and stuff, we just need to figure out somehow how to promote it better, whatever, and try to get sponsors that they get real dollar value back,” he said. “I raced for crumbs sponsorship-wise.”

So Wyatt has changed his funding strategy.

“Instead of the big money, I'm not looking for a multi-million dollar deal. I’m trying to find a whole bunch of little deals so if one of them goes away, I'm not out of business,” he said. “But those things have gone away. I can't find people to spend enough money to get motels or buy a barrel of fuel or buy clutch discs or whatever, like I used to. Those things are harder to come by. So if we can get back to where that is, where operating cost for me would be down, then it would make a difference to come out to race more.”

So while Wyatt is having fun with his own race car right now, he’s trying creative budgetary approaches so he can keep on doing that in a competitive way.