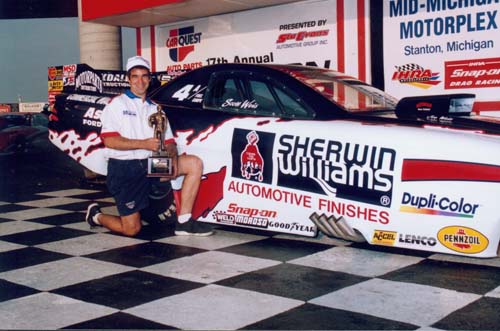 Four days ago, in an attempt to inspire participation within its Top Alcohol Dragster division, the NHRA’s Tech department reached out to its participants about the feasibility of including the injected-nitro combination into its exclusive supercharged alcohol category.

The request for input, which was posted on December 9, 2020, on the sanctioning body’s www.nhraracer.com website, established early in the message it was looking for ways to enhance competition and participation in the class.

It was not a proclamation of the future.

But to understand what the future might be, here’s a look at the past.

The injected nitro Funny Car class, designated as A/FC, first appeared in the NHRA rulebook in 1969 but disappeared from their class lineup with the demise of Pro Comp Eliminator.

At the end of the 1997 season, then IHRA Alcohol Funny Car racer Scott Weis, and two other teams - the Cavalieri Brothers with an ex-Whit Bazemore Funny Car and Gary Rettell lobbied for the A/Fuel Funny Cars for inclusion in the IHRA’s Pro Alcohol Funny Car division. 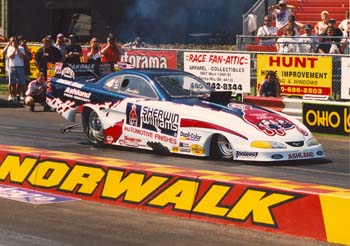 A total of six drivers competed in A/FCs in the 1998 IHRA season but Weis drew the most attention by far.

Weis’ participation immediately caused controversy, and it’s not difficult to figure out why. At the time, the screw superchargers were king in NHRA, over the roots combination. The IHRA, at the time, essentially opened its arms to the roots supercharger configuration.

Not long after IHRA welcomed its new participants in the Funny Car division, did the injected nitro revolution begin to take hold of the Top Alcohol Dragster division. Daring to be different, the IHRA, which had initially monitored the injected-nitro combination for inclusion in Pro Modified per Ted Jones, began to watch the progress of the Cavalieri Brothers effort. And, in 1998, the first year of the Bill Bader administration, they decided to welcome the A/FC combination into its Pro Alcohol Funny Car eliminator.

The plan was doomed from the start. If NHRA had accepted the A/FC combination into its program, it would have had a chance of becoming refined because the screw supercharger combination had the potential to run with the nitro cars. However, in letting the A/FC run over in IHRA, the move was akin to allowing a modern-day Pro Stocker to race in the Factory Stock Showdown.

This mistake became evident at the IHRA World Nationals at Norwalk, Ohio when Weis established a 5.74 world record at over 244 miles per hour. The biggest issue Weis faced was the nearest competitor was in the 5.90s. In the end, Weis won only one national event, but to his competition, this was one win too many.

The NHRA never considered running the A/FC combination in 1998. The closest it came was when the Cavalieri Brothers ran their car at the Dallas points race as an exhibition vehicle, which in itself sparked a lot of controversy. It seemed everywhere the A/FC combination went negative chatter followed it.

However, this wasn’t always the case with A/FC, as it was a functioning classification from 1969 through 1981. The AA/FC designation became official in 1968, but by 1970, NHRA added A/FC and BB/FC divisions into Competition Eliminator, and they raced on a handicap. Yes, there was nitro in Competition Eliminator. What was out of the norm was the BB/Funny Cars, which is today’s current Top Alcohol Funny Car, ran on racing gasoline, not alcohol.

The A/FC cars made noise, did good burnouts, and back then ran in the seven-second range. This combination was just a few tenths behind the big show Funny Cars and didn’t cost near as much money to maintain.

The A/FC combination and the BB/FC, AA/DA (supercharged dragster alcohol), A/Fuel Dragster and B/Fuel Dragster, Top Gas Dragster, and AA/Fuel Altereds were raced at the Southern California tracks in one class, heads-up. A race fan could watch all the action at Irwindale, Orange County, Lions, and others, in a division called Combo Eliminator.

By 1973, at the NHRA SuperNationals in Ontario, Ca., the Combo Eliminator was run on an exhibition basis and months later returned to become a fixture on the NHRA landscape and was renamed Pro Comp. The A/FC classification survived the NHRA purge, which once again nixed the Top Gas Dragsters, and allegedly for safety reasons, the AA/Fuel Altered.

The A/FC was available in Pro Comp, but the rules package did little to inspire racers to utilize it. At the end of the 1980 season, NHRA realized its Pro Comp class was quickly losing its parity when the AA/Dragster Alcohol classification dominated the division, pushing the BB/Funny Cars aside.

NHRA decided at the end of 1980 to split the dragsters and Funny Cars, something the American Hot Rod Association had done four seasons earlier to widespread approval. While it chose to allow the injected-nitro cars to remain in the dragster portion, the injected-nitro Funny Car classification was dropped in NHRA Top Alcohol Funny Car Eliminator, citing lack of participation and expense to run one as factors. The injected nitro Funny Cars could still be found in competition at AHRA and ADRA races and remained quite popular in circuits such as the California Injected Funny Car Association and the Midwest Injected Funny Car Association but even those groups switched to blown alcohol combinations by the mid-1990s.

And, the letter from NHRA brings the A/FC combination full circle.

Frank Manzo, Top Alcohol Funny Car’s most prolific racer, was around back in those days of the A/FC. He understands the NHRA’s reasoning and doesn’t blame them for trying to increase participation. Manzo wonders if the move will do more harm than good.

“Sometimes the change is good, sometimes the change is bad,” Manzo said. “Do I think it’s going to bring more cars to the class? No, I don’t really think so. There are a few different people who want it. I haven’t raced Top Alcohol Funny Car for seven years, but all I can say is, I really don’t think there’s parity in TAD.”

The stats back up Manzo’s statement, as at the final events of the 2019 and 2020 seasons, under the best conditions, the A/Fuel Dragsters were anywhere from .06 to .08 quicker in qualifying than their blown alcohol counterparts.

In an article published in CompetitionPlus.com some years ago, Weis said he’d consider running the A/Fuel combination again if the opportunity presented itself.

“We had everything but the blower,” Weis said. “I think I’d do it again if the opportunity presented itself. I will tell you that was the most fun I’d had in drag racing. I don’t think it would ever happen because the NHRA already has enough on their plate to police.”

With the letter to its participants, the NHRA sent a clear message there’s room on the plate if there are willing participants.

Christmas is coming. Check out our quality apparel produced by @gosvaink - Make sure you purchase the right kind of gift at https://t.co/QR7z0rKzRO. pic.twitter.com/RDFp4fJ5xk