Unlike the biggest events in other sports, during the Daytona
500 (Feb 17, FOX, 2 p.m.) the sport's athletes appear in virtually
every commercial break, keeping viewers tuned in.

During the FOX broadcast of the 2007 Daytona 500, NASCAR drivers
appeared in 46 percent of the commercials, according to. Dr. Max
Utsler, a professor at the School of Journalism and Mass Communication,
University of Kansas. In all, 19 drivers starred in sponsor spots, and
with at least 25 slated to be featured during the 2008 race, the
percentage of drivers in commercials may rise even higher, Utsler said. 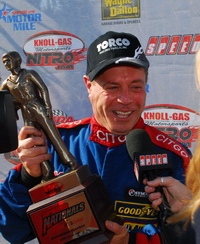 One of the leading IHRA mountain motor Pro Stock racers will do battle
this season without the colorful livery of a sponsor he’s serviced for
nearly a decade.

John Montecalvo, of Center Moriches, New York, was notified recently
that longtime sponsor, Citgo Liquified Petroleum division would be
discontinuing their long working relationship. The successful
department of Citgo was sold to Nu Star Energy, who in turn notified
Montecalvo they had no interest in pursuing motorsports sponsorship as
a marketing avenue.

“I am grateful and honored to have had such great, loyal support for
all these years,” Montecalvo said in a prepared statement. “However,
with time I’ve learned that when one door closes another opens.  Our
team is determined to be successful and has the will and desire to find
its way.”

HUMPHREYS HAS HEARD THE CRITICS AND LAUGHS AT THEM 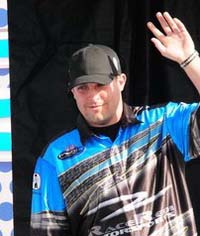 Humpreys, against the odds, bet on his team’s focus on winning.

Humphreys is the only one that put his cash down on the alliance surviving a mixture of colorful personalities.

“There was some that said our association with Richard wouldn’t last
more than two races,” said Humphreys, smiling as he spoke. “Then
Glidden came on board and those same people were putting money that
Glidden wouldn’t stay past one race. Then it was Indy. Here we are in
our second year. Hopefully we have a few more to go.”

Nitro Funny Car racer Bob Gilbertson, who's
cutting back to a limited season this year, will start testing in the up-coming
weeks and plans to make his first NHRA start in 2008 at the 39th Annual NHRA
ACDelco Gatornationals March 13-16.
Gilbertson, who is actively searching for
marketing partners to join his team, will banner his own business, Trick Tank on
the flanks of the wildly painted Monte Carlo that he'll campaign to start off
the year. 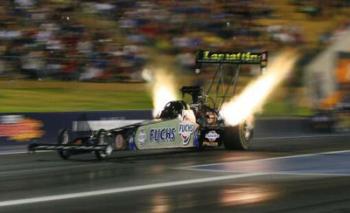 After taking out the last round of the Australian Top Fuel Championship at
Perth's Motorplex circuit, just a fortnight ago, Phil Lamattina now believes he
and his Fuchs Top Fueler can still win the 2008 Championship and aims to show
further strides at Western Sydney International
Dragway this weekend.

Lamattina made the comments ahead of this weekend's huge event
at Western Sydney International Dragway, the Summernationals, where he plans to
continue the momentum the team gained with their Perth victory - "It was our
consistency that won us the Top Fuel Spectacular in Perth. The Fuchs Dragster
was solid from the first pass and with sub five second ET's on all of our runs,
we showed just how good this car is," said Phil.

"If we have any chance
of taking on Phil Read for the championship, we have to continue to improve on
what we achieved in Perth. We honestly feel that we can still win [the
championship] and we will be giving it everything we can in
Sydney." 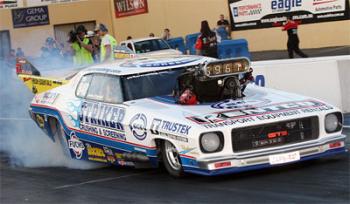 Nineteen of Australia's quickest Doorslammers descend on Western Sydney Dragway
(WSID) this weekend for the annual Summernationals, all keen on reining in the
quickest man - John Zappia.

Zappia leads the ANDRA Top Doorslammer
Championship in the Striker Monaro with 343 points, after two wins and a
runner-up in the first three rounds. Steve Stanic follows on 240 points, rookie
Stuart Bishop on 185 points, and a group of the heavy hitters in Gary Philips,
Ben Bray, Brett Stevens, Victor Bray and Robin Judd close behind.

The
current season has seen the Striker Monaro leading the field in qualifying,
displaying solid reliability and consistency in the low 6 '0's, and running
three stunning five second passes that wowed the crowds.

An exciting new partnership
between KDH Racing and Hedman Hedders for the 2008 Season will see both Kate and
Diana Harker using Hedman Hedders Products on their A/Fuel
Dragsters.

As a prime leader in the performance
exhaust industry, Hedman Hedders will be a proud partner of KDH Racing
throughout the twin’s busy season and both ladies are looking forward to the
opportunity of carrying Hedman quality exhaust’s on their race
cars.