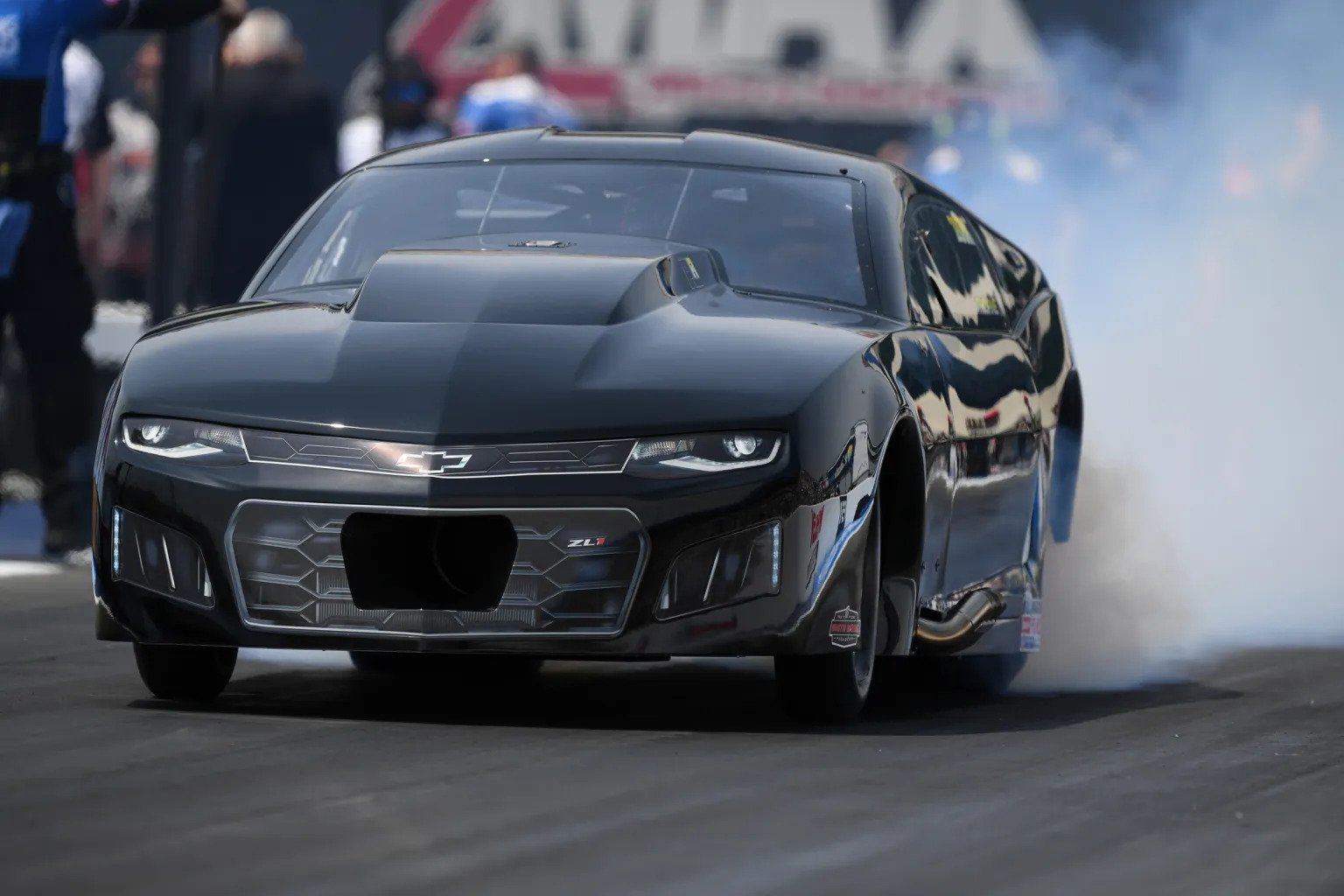 Kris Thorne stayed perfect during the 2022 season in the FuelTech NHRA Pro Mod Drag Racing Series presented by D-Wagon, picking up his second straight victory to open the year with his win on Sunday at zMAX Dragway.

The event, which was powered by Precision Racing Suspension in Charlotte, was the second of 10 races during the 2022 FuelTech NHRA Pro Mod Drag Racing Series presented by D-Wagon season.

SAMPEY RIDES HER WAY TO PSM NO. 1 IN CHARLOTTE 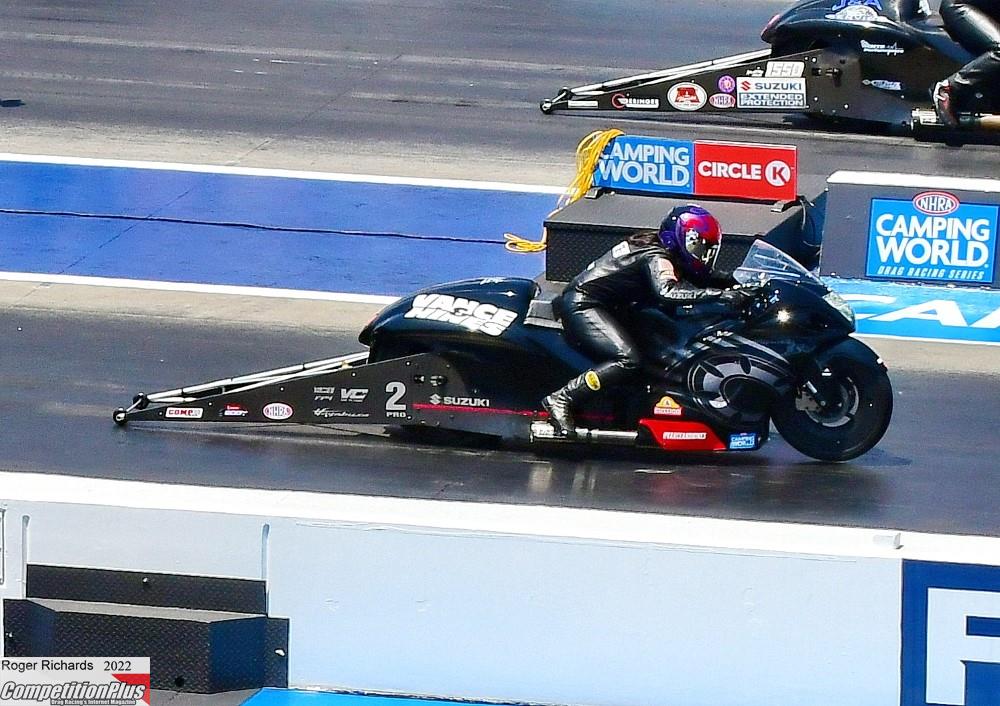 Angelle Sampey knew sooner or later her bike would do what it did Saturday in Charlotte.

After falling just short of the Pro Stock Motorcycle pole Friday evening to Steve Johnson based on speed, the rider of the Mission Foods Vance and Hines Sukuzi rocketed to the top spot in the third session of qualifying on Saturday with a sizzling 6.714 elapsed time at 201.16 miles per hour.

Sunday's final results from the 12th annual Circle K NHRA Four-Wide Nationals at zMax Dragway. The race is the sixth of 22 in the NHRA Camping World Drag Racing Series: 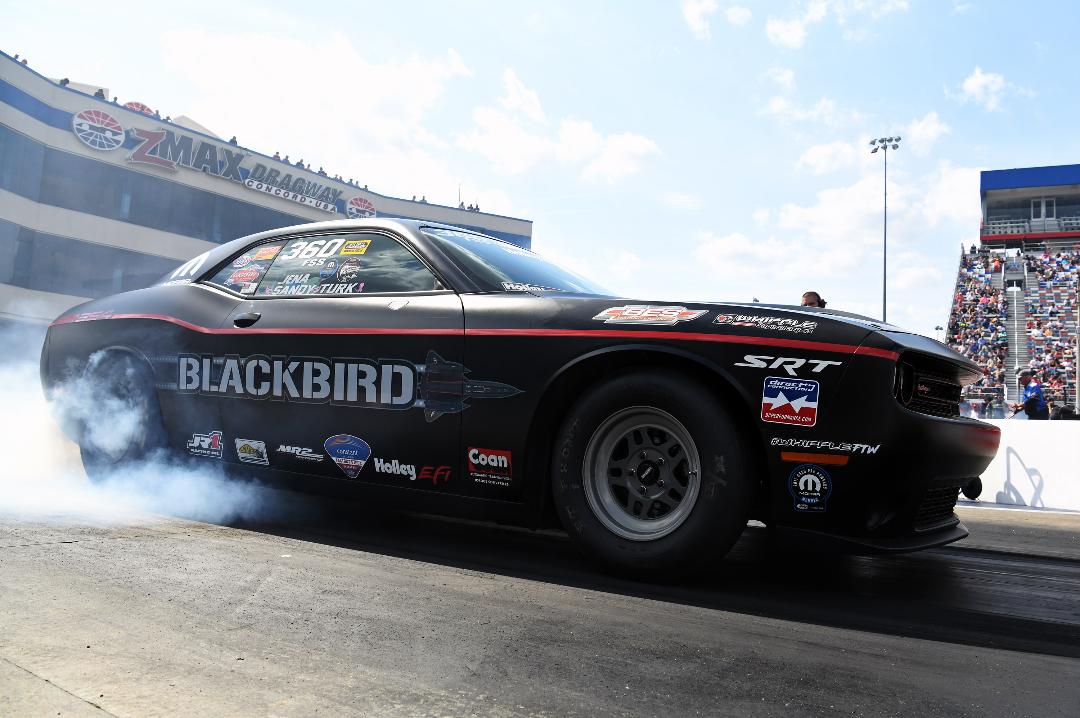 Geoff Turk raced his Wild Turkey Engineering Dodge Challenger Drag Pak to his first Constant Aviation Factory Stock Showdown No. 1 qualifier Saturday at the Circle K NHRA Four-Wide Nationals at zMAX Dragway. Turk landed the top spot by being quickest each of the four qualifying sessions, improving with every pass. Turk’s last run of the evening, a solid 7.755-second pass at 180.43 mph, would ultimately earn him the No. 1 spot heading into race day.

“This place, zMAX, it’s like the Disneyland of drag racing. It’s a beautiful facility,” Turk said. “Track traction here for me is challenging, driving these crazy cars it’s challenging everywhere but today though, this track has been good. This car has been great. It’s actually the third race on that engine because I’m a one man show.” 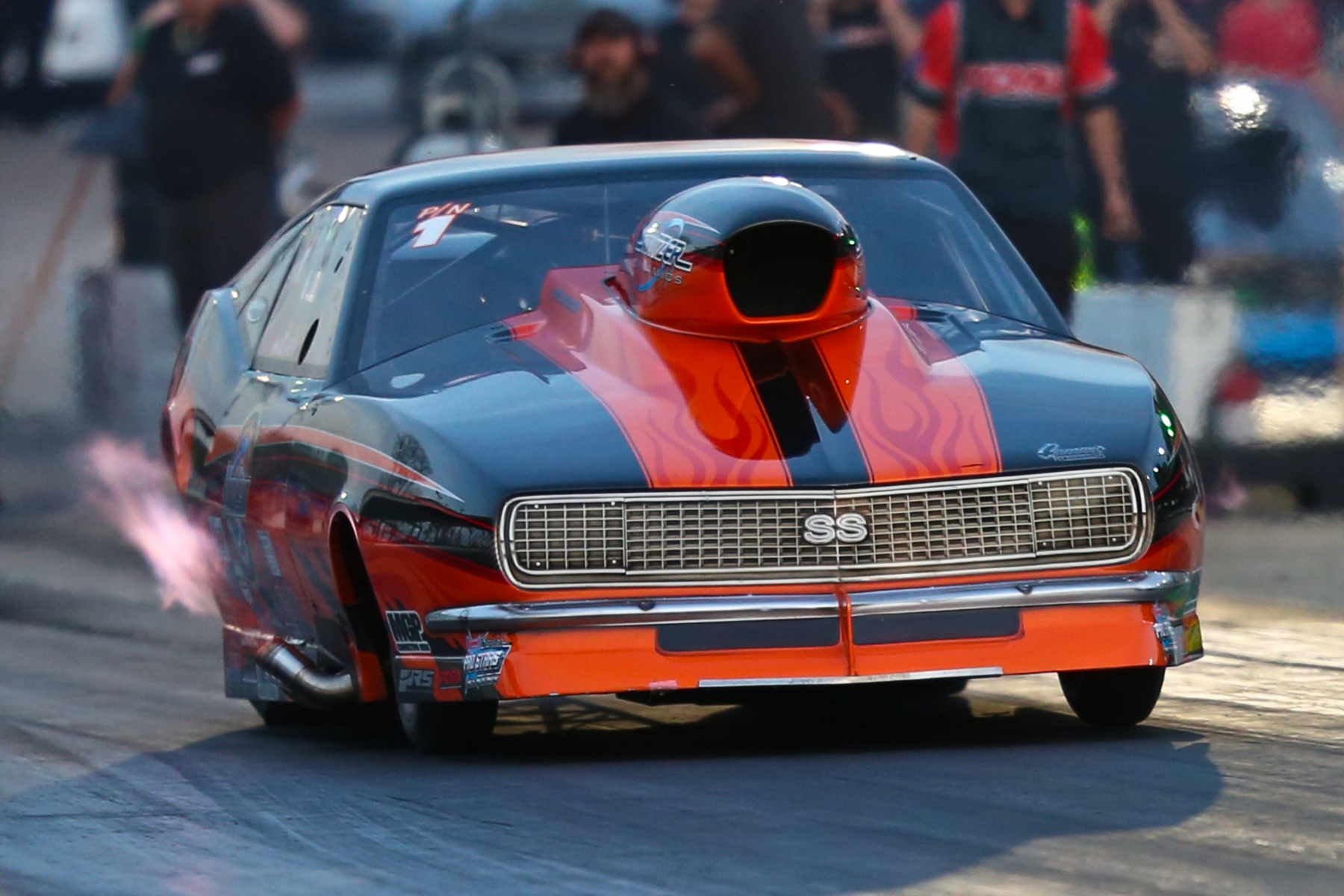 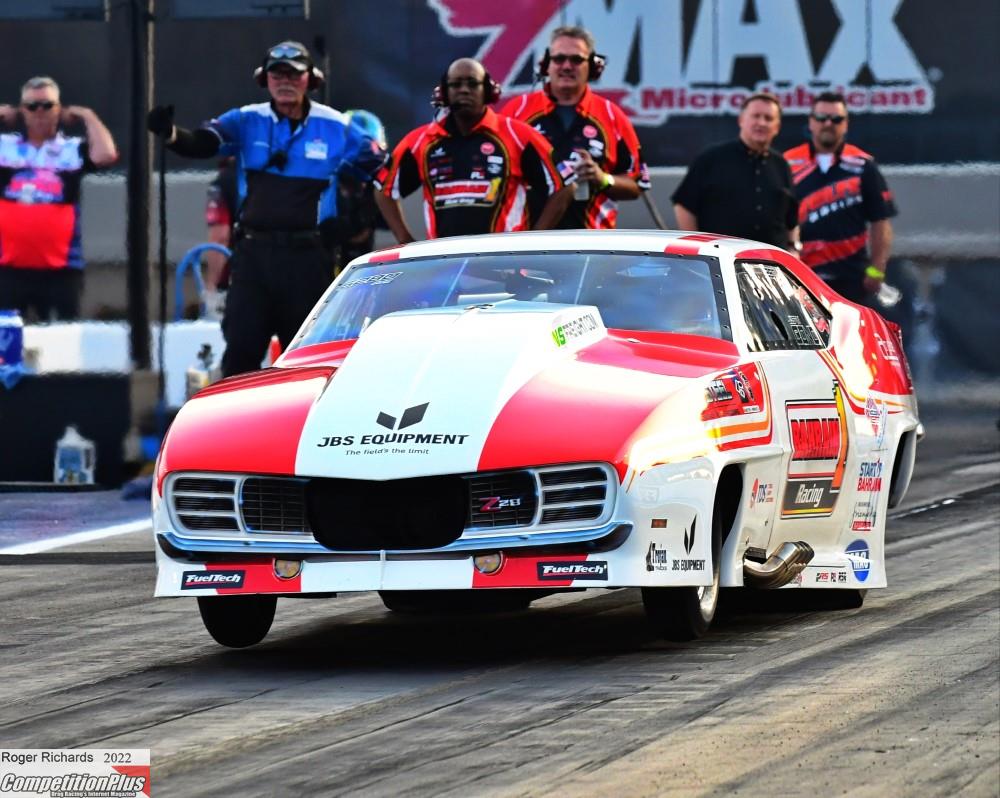 With the potential for weather to move into the area forecast for late Sunday afternoon, zMAX Dragway and NHRA officials have revised Sunday’s competition schedule for the Circle K NHRA Four-Wide Nationals at zMAX Dragway, moving up the start of competition. 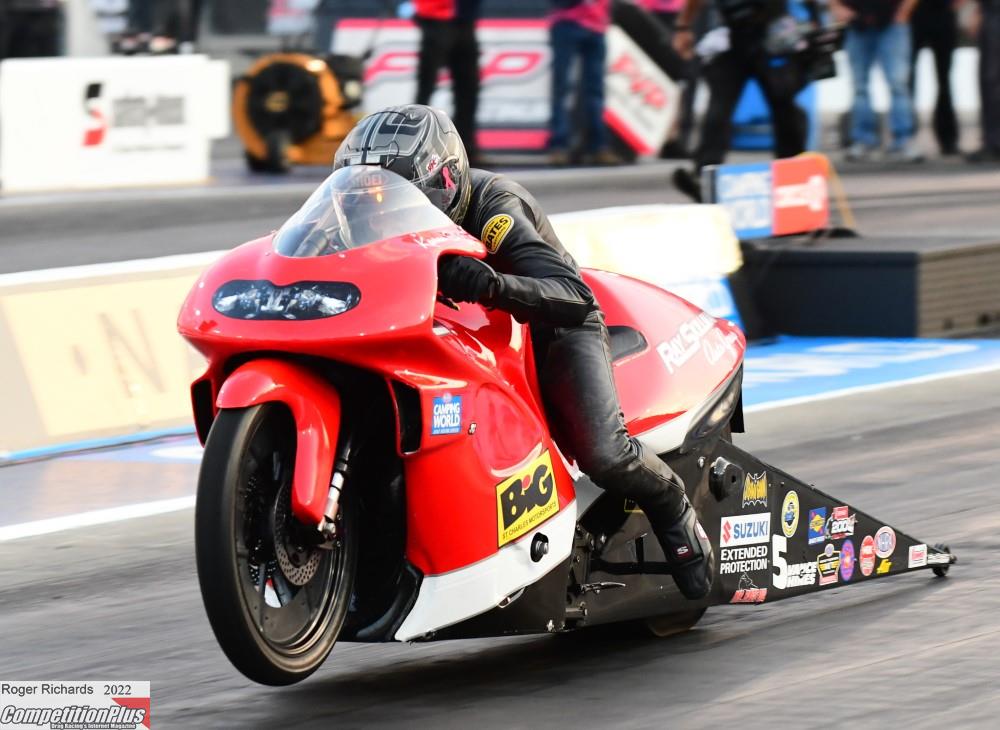 It’s been almost 26 years since Karen Stoffer made her NHRA Pro Stock Motorcycle debut in Denver.

This season is very likely her last.

Stoffer, an 11-time national-event winner, is ready to hang up her helmet, but only in terms of full-time Pro Stock Motorcycle competition. She’s in her third season with the White Alligator Racing team because she skipped the abbreviated 2020 campaign due to COVID-19’s impact on her career in Nevada. At the season-opening race for the class at the Gatornationals in March, she not only won, she recorded the quickest run in the division’s history at 6.665 seconds in a second-round victory over Eddie Krawiec. 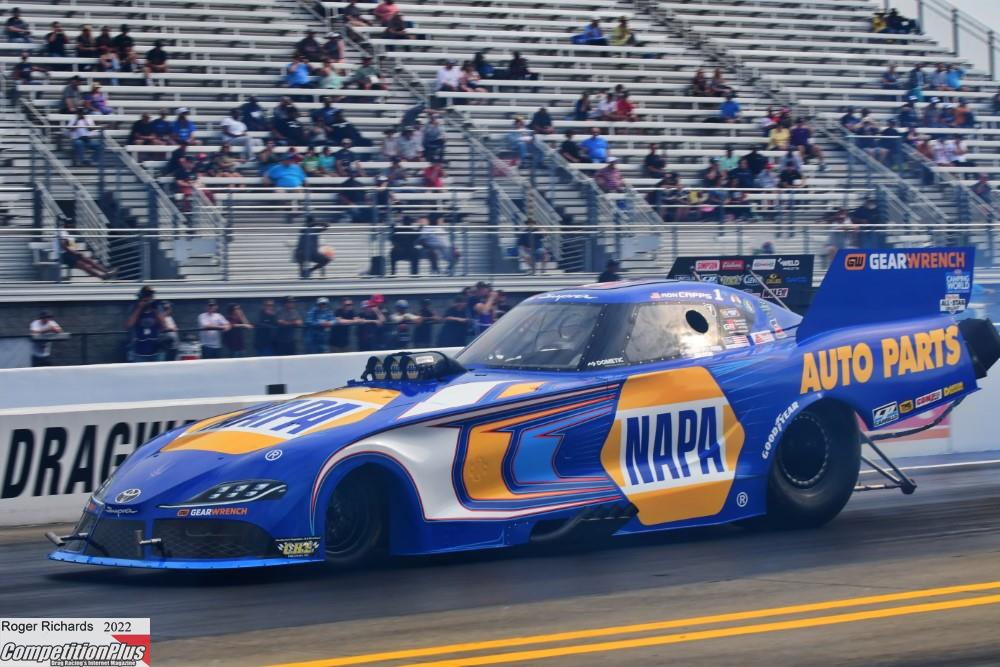 Two hours before unveiling his new baby Friday, Ron Capps had the butterflies of a prospective father pacing in a waiting room.

Nine months, you see, is how long it took for Capps’ desire to become a Toyota-backed racer to putting the manufacturer’s GR Supra body on the track. It became a reality with first-round qualifying at the Circle K NHRA Four-Wide Nationals at zMAX Dragway.

“I’m nervous,” said Capps, the 2016 and ’21 NHRA Funny Car champ who this season launched his own team. “I’ve driven a long time, but I still just want to make sure I do everything right. I’m excited about getting down the track and (crew chief Dean ‘Guido’ Antonelli) finding the right balance for this body.