One of NHRA’s long-established
events — the race celebrated its 26th anniversary last season — this
long-running belle of the South has gained a reputation as one of the tougher
events on the tour to win. With summer just around the corner, warm temperatures
can turn the event into "Hotlanta."

Keep up with this weekend's NHRA Springnationals
by reading our behind-the-scenes event notebook. We bring you the stories behind
the numbers and win-lights throughout the course of the weekend. Tune in daily
for the latest news from the pits.

The IHRA Spring Nationals has remained a staple of the Knoll Gas Nitro Jam Series since the sanctioning body's formation in 1971. Originally contested in Bristol, Tenn., the event was moved to Rockingham, NC., in 1999. This event showcases IHRA drag racing's penchant for quick elapsed times and blazing speeds.

Keep up with this weekend's IHRA Spring Nationals by reading our
behind-the-scenes event notebook. We bring you the stories behind the numbers
and win-lights throughout the course of the weekend. Tune in daily for the
latest news from the pits

As if Las Vegas weren’t loud and ostentatious enough in its own right, the
city hosts the fire and fury of the NHRA POWERade Drag Racing Series twice each
year.

Keep up with this weekend's NHRA SummitRacing.com Nationals by reading our
behind-the-scenes event notebook. We bring you the stories behind the numbers
and win-lights throughout the course of the weekend. Tune in daily for the
latest news from the event.

In the Pro Fuel Shootout Urs Erbacher (near lane) lost in a fiery final to winner Lex Joon of Holland (far lane).

Funny
Car made a welcome return to European racing this Easter, back from several
years in the doldrums and back in bigger numbers. But in the final outcome of
the Pro Fuel Shootout, the Top Fuel cars made the best of things.

Fine English weather heralded the start of spring as the sun
shone on crisp mornings and delivered warm afternoons during the four-day
Easter Thunderball, the opening event on the British calendar.

It attracted contestants from all over Europe to headline in
the Pro Fuel Shootout, a long-running contest pitting Top Fuel against Funny
Car, the latter being afforded a slight starting line advantage. Two Swedish
drivers, Patrik Pers and Håkan Fällström, were there licensing. Pers suffered a
flash fire on his last run and Fällström had the fuel pump malfunction, which
ended with the Pennzoil Dodge body being blown fifty feet in the air. Both
drivers have to complete one more lap at the next event to gain their licence.

VANCIL OUT FRONT IN THE CHAMPIONSHIP CHASE AFTER A
WIN IN ARIZONA.


Just two rounds into the 2007
AHDRA series, and it's already clear this season's championship hunt could be
more competitive than ever in several of the categories.  The Screamin' Eagle Arizona Bike Week
Nationals presented by Chandler Harley-Davidson and Arrowhead Harley-Davidson,
AHDRA's Western opener, was legitimate proof. 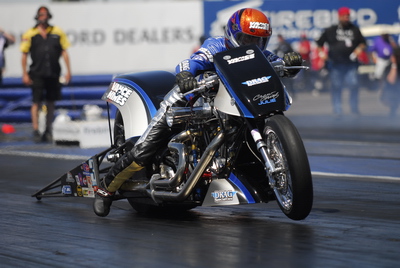 Rider of the Vance and Hines/Drag
Specialties Nitro Harley Doug Vancil took the Top Fuel point’s lead with a win
at round No. 2 of the AHDRA series on the first weekend of April.

Vancil is undoubtedly one of the most highly decorated dragbike racers
today.  The steadfast Nitro Harley pilot has held numerous performance
records and earned a pair of championships in the defunct-IHRA Top Fuel Harley
class and the AHDRA championship in 2004.

Vancil recognizes the ultra-competitive climate in the category and candidly
expressed what it will take to earn the championship in 2007.


"We only won two races last year and it's going to take a lot more than
that to get the job done out here," Vancil said.  "It all
comes down to consistency."

For 2007, with the help of Vance and Hines, Vancil developed a new
beefier 196 cubic inch motor.  The power plant is 37 cubes larger than the
159 cubic inch motor he started 2006 with.

Keep up with this weekend's NHRA Springnationals
by reading our behind-the-scenes event notebook. We bring you the stories behind
the numbers and win-lights throughout the course of the weekend. Tune in daily
for the latest news from the pits.

For performance fans, no track is better situated. Houston Raceway Park
benefits from incredible atmospheric conditions because of its proximity to
Trinity Bay, which feeds the facility cool air. The track’s first NHRA national
event, in fall 1988, established HRP as one of the sport’s quickest.