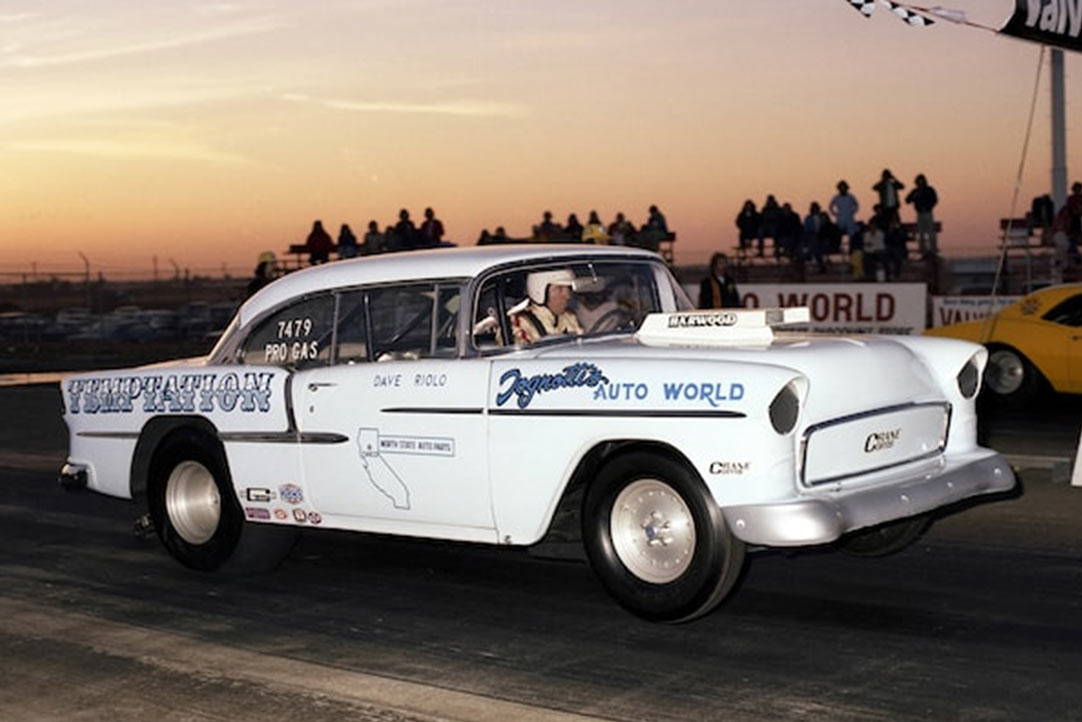 Dorman, track manager Randy Liddell, and his staff had gotten together for their traditional pre-race morning meeting. The group was going over their assigned chores for the night’s special eight-car show. Indeed, it was going to be a blast, as local Modified Gasser favorites Bob Bunker, with his ’55 Chevy, Tom Thornhill, and his 1963 Falcon, and the Yuill Brothers with their ’67 Camaro were among those expected to compete. There was one problem, though. This wild show didn’t have a name. A joking comment by Dorman ended up becoming the group’s battle cry.

Dorman said, “Most tracks can afford to book Pro Stockers. Heck, we can only afford Gassers. I guess we’ll call them Pro Gassers. After everybody laughed, they realized that they actually liked the name. Dave Riolo, a local racer, was standing behind Dorman when he said it. Evidently, he liked the idea because he and the other racers later came to the line with ‘Pro Gas’ shoe-polished on their windshields.

Thus, Pro Gas got its name. Dorman ran this kind of show with no index, wide open, and an eight-car field. The format caught on like wildfire. Up until 1974, promoters continued to buy in similar shows. Most of the guys that raced in this program lived in the Sacramento, Calif., area where, in 1974, they organized and approached Sacramento Raceway’s Dave Smith about putting together a program to run regularly. Before ’74, they ran on a 10.50 index in a program encouraged by the Yuill Brothers, who would eventually step up to Pro Stock.

A 9.90 index was later adopted, with a breakout, when the points series began, and the fields were limited to eight. As time progressed, the index was dropped to a 9.70 and then even further to a 9.50 in 1978. In judging the performances from that era, these cars were flying. To give you an idea of how close in time that these cars were, let’s compare them to Pro Stock. Today, the current Pro Stocks would have been 3.4 seconds quicker. Back then, in 1974, only nine-tenths of a second separated the two.

Veteran outlaw shoebox campaigner Riolo recalled those early days of Pro Gas racing. He admits that even though the cars were going really fast, it wasn’t as complex to race the class back then as it is today. He interviewed with CompetitionPlus.com back in 2003.

“Back in those days, running mid-nines was expensive,” Riolo explained. “We didn’t have much of a chassis. You saw lots of fuel-injected cars and four speeds. They didn’t have an automatic developed enough to run the numbers, and the Lenco transmissions were too pricey. Parts were hard to come by for the particular combinations that we had. We had to make a lot of our own parts to run 9.70s in 3,000-pound cars. Setting up the car was basically a shot-in-the-dark method that worked more times than not.

“When the index dropped to a 9.50, you’d go out and feel for the weather. My particular routine consisted of feeling the track and weather temperature, making a throttle adjustment and then going out and running consistent .50s and .52s. I’d like to see someone win a race these days by using this method.”

he class progressed, and the index was dropped to 9.50 by 1978. By this time, Pro Gas had taken California by storm, and Sacramento Dragway was the place to be if you lived in Northern California. In Southern California, it was the famed Orange County International Raceway. The competition was hot and heavy at these two popular venues.

When the NHRA wanted to create a national event version of the popular Pro Gas concept, they conferred a lot with the Southern California racers, and they pushed for the index to be 9.80. The Northern racers had their own opinions, and the overwhelming consensus was that “9.80s were for old ladies.” Some were pushing for 8.90s.

The NHRA was very interested in Pro Gas. This new style of racing provided them with a means to boost participation without all of the usual technical headaches often associated with policing the class racing divisions, which provided the only avenue for a sportsman racer to compete on the national event level. The sanctioning body contacted several of the racers in California. The problem that emerged is that one group provided an example, while another gave another account of how it “ought to be.”

The end result was what the NHRA described as a compromise to attract both groups. They chose to debut the new program at the 1980 Winternationals in Pomona, Calif. The So-Cal guys largely supported the program, but the Northerners were nowhere to be found when the tree dropped for the first time. According to our sources, the reason that guys like Riolo and Bunker didn’t support it is that they felt that the NHRA had butchered their concept. One of their most significant gripes was the legality of the street roadsters in the program.

Dave Wallace was a freelance writer for the major drag racing magazines at the time all of this was going on. He remembers those days well.

Wallace said, “The guys up North were really pissed off. Some felt like, ‘Here we are running these big blocks in these old heavy cars, real cars, we might add. Why go through all of that trouble to have a tube chassis, small block with better visibility put you on the trailer first round. We are going through all of this trouble to make this thing a unique format, and these guys are going a cheaper route, which virtually takes away all of the originality that we’d worked so hard to preserve.’ When Bob Tietz won Pomona with an automatic small block roadster, he virtually sealed its fate and set a precedent in the NHRA’s version.”

Tietz, a long-time Pro Gas advocate, remembers the roots of this movement. He recalled that fateful day in a 2003 CompetitionPlus.com interview, “Ron Williams let me drive his car at Pomona. I remember they made us qualify a week earlier at OCIR. It was the quickest 32 cars, and they wanted us to showcase our program at Pomona.”

Tietz continued his trip down memory lane by adding, “The Southern California guys didn’t want to run the fast indexes like the guys up North did. We had a hard enough time finding cars to run 9.90s. Some of them wanted the index at 10.50. As for the roadsters, the Southern California people wanted them because they felt it was just one more competitor for their cause.”

Though Tietz is from Southern California, he often ventured up the interstate to Sacramento Raceway. At a time when the guys up in Sacramento gave the So-Cal guys a hard time for wanting to go slower, Tietz was very much competitive. He never let the taunts get to him as he won more times than he lost. Tietz won the Northern California Pro Gas series championship three times.

The NHRA made some significant changes in their sportsman program to accommodate the indexed, pro-tree concept. The index was adjusted to a 9.90, and rebranded as Super Gas. This new line-up was created at the expense of the old Modified Eliminator class. Suddenly, the NHRA didn’t have to deal with gripes that the four eliminators of class racing design could generate. They now had only three.

The NHRA now had a group of bracket cars that required very little attention except for safety. There was also a larger group of bracket cars when compared to legal Modifieds, so it was a financial no-brainer as to which would be the better of the two to choose. The IHRA jumped on the wagon as well in 1981. At this time, the sanctioning body was based in Bristol, Tenn., and felt that a 10.50 index would be perfect for them, so they added it and named it Hot Rod. A full 64-car field with alternates to spare was nothing new for the IHRA. By 1982, they expanded and established a 9.90 version, dubbing it Super Rod.

Since the inception of Super Gas, the style and type of car that has competed have drastically changed. For instance, in the early-Eighties, less of an emphasis was put on reaction times and more on running consistently. Riolo’s famed “Temptation” shoebox utilized a pretty unconventional set-up in 1980 that was capable of winning in Super/Pro Gas competition. His combination in today’s Super Gas ranks wouldn’t even stand a chance as most experts contend.

Riolo’s ’55 Chevy was powered by an injected, 482 Yenko and engaged a Chrysler Hemi four-speed. This lumbering beast topped the scales at 2,900 pounds.

Before we continue this trip down memory lane, not every one of the pioneering machines carried this same combination. For example, some tried the small motor, lightweight car combination, and others that bypassed the carbureted or supercharged format for fuel injection. Some even experimented with nitrous oxide. The days of those mentioned above “odd” combinations are gone. Or, at least in the conventional sense, they are absent.

A technical look at one of today’s Super Gasser is enough to make one of those Pro Gas purists of yesteryear sick to their stomachs. Gone are the oddball blown combinations, and the original “have your own identity deals” that once fueled the spectator and media support. As times change, so do situations. This has been the case with Super/Pro Gas. With its Pro Modified-style introduction and today’s computerized format, the class has evolved fill a need. A major complaint is that the cars no longer run side-by-side, opting to play a neat game of cat and mouse. Some like the way it has evolved, and some don’t.

But, regardless of how you feel, it filled the void and provided national opportunities for the sportsman racer, at least on the national scene. Imagine the cost of entering drag racing under the same standards that were once mandated for the class cars, and you’ll quickly see why Pro Gas had to happen to take sportsman racing to the next level.