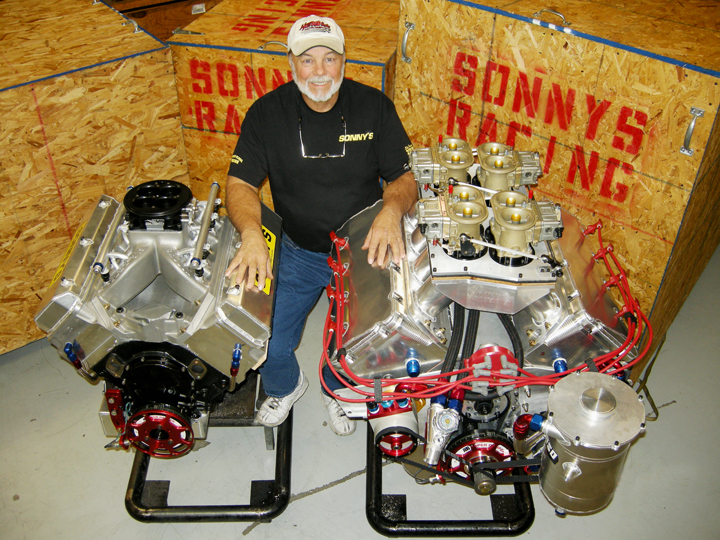 Engine Builder’s Impact Is Still Being Felt In Racing

Necessity may be the mother of invention, but the desire to succeed and then hard work is what makes it come true. That’s what happened when a small, 300 square foot shop called Sonny’s Garage emerged years later to become Sonny’s World Class Racing – and it’s still going on.

After 50+ years of developing engine combinations ranging from 400 to 1,000 cubic inches, many people are surprised about where Sonny Leonard came from.

Following his time in the U.S. Army, Sonny was employed as a tech at a Chevrolet dealership where he put in extra time on nights and weekends to make a few bucks so he could drag race.

After selling his car and borrowing $300 from the bank to start his business, Sonny and his wife Frances set out on their own to open a shop  in a 300-square-foot building that could barely fit two cars.

He worked on anything that had wheels, anything that would pay the bills to keep his business going. That ranged from fleet truck maintenance to farm equipment to other racer’s cars.

Sonny would do the hardest jobs, the ones that involved internal engine work the big retail names didn’t have the expertise to do. High performance street and strip engines had to have closer machine tolerances on components. That meant sometimes taking a two-hour round trip to the nearest performance machine shop to get work done that Sonny didn’t have the equipment for.

Making that trip cost extra time and money that couldn’t always be charged back to a customer, so Sonny took it upon himself to learn some new skills so he could bring that work in-house.

Sonny recalled, “‘I thought maybe I’ll buy some equipment of my own, but I didn’t have any experience in machine shops, so I went to night school.”

Sonny was able to borrow money for machine shop equipment so he could apply what he’d learned and then relocated his expanding business to make room for everything. He used that to build some engines for his drag racing hobby and soon developed a local following that had seen how well his car ran at the track.

In the early 1980’s, he put together a 540 cubic inch engine combination for a young Ohio bracket racer named Chuck Sneed who wanted to try his hand in IHRA and AHRA Pro Stock.  Sneed surprised people with his performance, becoming a member of the Holley 7-second club.

The “run whatcha brung” style of Southern drag racing meant getting more power by whatever means was necessary, so Sonny’s recipe in getting more power for big cubic inch engines was in demand. Business continued to grow, forcing Sonny to relocate his shop again to get more space.
In 1987, a little-known midwestern racer named Bill Kuhlmann bought a 615-cubic inch engine kit from Sonny’s, added some nitrous and ran it at Darlington in Top Sportsman. He came home from that event with national recognition of being the first driver in a doorslammer to ever break 200 miles-per-hour.

“I really didn’t think that it was so important to his racing to be the first full-bodied car to run 200 miles an hour,” Sonny said at the time. “You could run 199 all day and it ain’t no big deal, but you run 200? I didn’t realize how important that was.

I just didn’t think much about it. But when he did it, that was something.”

Ted Jones, who was the IHRA president then, decided to create a heads-up class to accommodate these powerful, crowd-pleasing cars that we know as Pro Modifieds today,

From Mountain Motor to Monster Engines

The extreme popularity of Kuhlmann’s performance had a huge impact on racing as a whole as big mountain motors became all the rage. The demand for bigger and better race engines had maxed out the limits in cubic inches of what a stock block could accommodate. Many thought that engine development had hit a wall.

“I believed back in those days that engines could only get about 540 or 550 tops,” Sonny admitted. “Those were mountains back then but in today’s world, they are effectively molehills now.”

Sonny met that challenge by abandoning the use of factory production car and truck engines in favor of aftermarket blocks with larger dimensions. Raised cam locations, spread oil pan rails and larger bore centers provided room for larger and larger displacements. Sonny helped design the features of an aluminum block with Donovan Engineering.

That, in turn, necessitated the need of heavier duty internal engine components which could safely handle the greater stresses of racing. Larger diameters push rods and camshafts were developed to minimize flex while connecting rods and rod bolts began to use space age technology for superior strength.

The culmination, at least for now, was the ground-breaking 1,005 cubic engine which Sonny later developed and built for an overseas customer.

Sonny’s Garage, as the business first was known, grew into Sonny’s Racing as narrowed his focus to just competition engines. Now that the business got more and more international business, the name evolved into Sonny’s World Class Racing.

Recognized for its forward-thinking and product quality, inquiries from the truck pulling and high-performance marine communities began to ask for Sonny’s expert services. Though not publicized, the business also had a hand in NASCAR and motorcycle racing as well.

It all came from the recognition and praise that Sonny had earned from his long-time customers.

New Yorker John Montecalvo, who won Pro Stock association championships in three different series with Sonny’s power under the hood, was an example.

“He has always been progressive and on the leading edge of technology. If there is a way to make more horsepower, Sonny and his phenomenal employees would find it,” he said.

Now in his seventies, Sonny Leonard still has a regular presence at his business, as well as his wife Frances and daughter Kelly.

A wide array of customers from every corner of racing across the globe continues to seek parts, engines and knowledge from Sonny’s World Class Racing.

From those humble beginnings in December of 1968, Sonny’s World Class Racing rose in prominence with innovative engine designs and uncompromising performance. That’s resulted in well over 100 national and world records on land and sea. In mountain motor Pro Stock alone, Sonny’s engines have amassed 17 championships within the PDRA, IHRA and ADRL.

Thinking back on the past half-century, Sonny still can’t believe how far the business has come.

“When I think back to my time at that little 300-square-foot building where I started, we didn’t even know if we’d make it or not,” he said.

When it’s all said and done, his is a lifetime of determination, hard work and the success that came with it. It was the fulfillment of the American dream.

If you have to wear a face covering, you might as well look good and fast doing it. We received this new shipment of masks today from our friends at https://t.co/RJQ6L0BTUR. Get yours today, as they are only $12 plus shipping. - CLICK HERE TO BUY - https://t.co/zvmO24nUYt pic.twitter.com/wyAdnCCwjz