The two young sons of Top Fuel racer Doug Herbert were killed in an automobile
accident Saturday morning in Lake Norman, N.C. Jon, 17, and James, 12, died
instantly when their Mazda3 collided with a second vehicle.

Herbert, who was in Phoenix for
preseason testing, is devastated and headed home to be with his family. 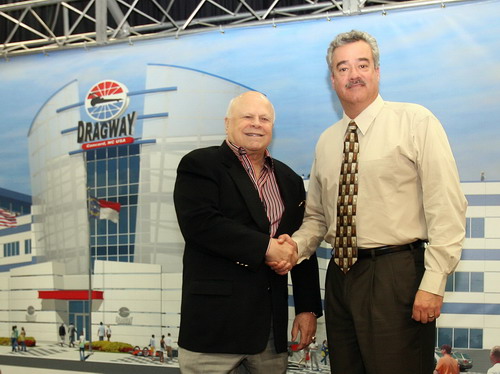 Tom Compton, NHRA President, appeared a bit overwhelmed by
the hundreds of media attending the recent Speedway Motorsports Inc.,
announcement concerning the construction of a state of the art drag racing
facility in Concord, North Carolina which will host it's first event, The
Carolinas Nationals, on the weekend of September 11th through the 14th.

Compton's laid back style stood out in contrast to the high
energy, high profile manner of SMI Chairman and CEO Bruton Smith. Even
following the announcement, Compton relaxed under the weight of two or three
reporters while Smith looked more like the Ring Master at a three ring circus.

Yet, if was Compton who had to face the fire first as the
presentation moved into a traditional NASCAR-style question and answer session.
Half a year after announcing the proposed sale of NHRA assets to HD Partners,
Compton didn't have a decisive answer to the question of when the sale would
close.

Keep up with this weekend's U.S. Street Nationals in Bradenton, Florida by reading our behind-the-scenes event
notebook. We bring you the stories behind the numbers and win-lights throughout
the course of the weekend. Tune in daily for the latest news from the
pits.

Bill Miller was as mad as
a man could get Friday afternoon. So mad was the veteran piston manufacturer
whose Top Fuel dragster runs a limited schedule that he was rebooking his plane
tickets to fly home early Saturday morning. He’d planned to spend a weekend
testing his new Top Fuel dragster and working with new driver Troy Buff.

That was the plan that
never came to fruition.

Instead Miller was
notified by NHRA Director of Top Fuel & Funny Car racing Dan Olson that his
chassis was illegal per the established S.F.I. specs mandated. The safety
conscious Miller was taken aback by the ruling.

Miller was essentially
eliminated because he said he took safety to the next level.

“Dan Olson said because
the car did not have the joint that combines the driver’s compartment to the
inch-and-a-half .095 tubing at the rear of the three verticals that come
together, made the car illegal,” Miller said. “Basically I didn’t want a
‘break-me-here spot in the car’ and I did that because you can’t tell me how a
car will crash every time.” 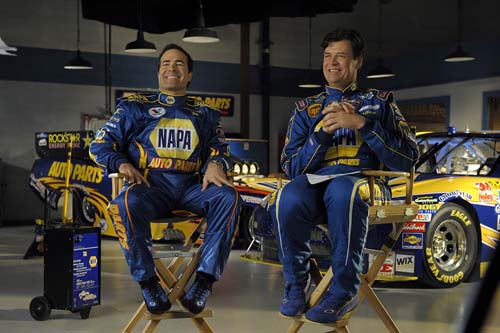 The chances of NHRA drag racer Ron Capps racing his NAPA AUTO PARTS Funny Car
head to head against NASCAR driver Michael Waltrip's NAPA-sponsored stock car
are quite nil, but the duo, who share the same sponsor in their respective
series, had their five minutes of fame together at a commercial shoot this week
in Charlotte, N.C.

For two days in a downtown Charlotte studio, in front
of a staff of 81 people on set, Capps and Waltrip sat, stood, posed, quipped and
sparred with each other as they read their lines for a series of NAPA
commercials which will air on network and cable television beginning in
February.

For Capps, this was a whole new experience: having a trailer
with his name on it, a makeup artist checking his "shine," and his own personal
"stalker" making sure he did not stray far from the set, which was created to
resemble a garage area (replete with both race cars) and the inside of a NAPA
AUTO PARTS store.

PARITY AN ISSUE FOR TAD RACER

Fri, 2008-01-25 06:03
After finishing fourth in national points standings in NHRA Top Alcohol
Dragster last season, Jim Whiteley and his Norm Grimes lead "YNot Racing" team
will enter the 2008 season in a 'test' mode of sorts.  Not so much in the fact
they will be testing exotic combinations on the track, instead they will be
gauging the balance of the Top Alcohol Dragster class itself.  Competitors in
the Top Alcohol Dragster class are allowed to run two different vehicle types,
supercharged (blown, the combination Whiteley runs) alcohol and injected nitro
(A/Fuel).  If Whiteley doesn't see an improvement in the balance of the class,
Whiteley and his team will make the move to the Pro Modified
category.
The World Championship has been claimed by an
A/Fueler every season since 2002.  Despite several attempts to slow the
A/Fuelers down by reducing their nitro fuel percentage, they have maintained a
dominance in the performance department.  A casual glance at nearly any NHRA
national event's qualifying sheet will show several A/Fuel cars in the 5.20's,
even a 5-teen on occasion, while there has been less than ten blown alcohol
drivers to ever run a 5.20 in the history of the class.
Whiteley and Grimes haven't taken the situation
passively hoping for a rule change to increase their competitive stance.  Grimes
and the team have spent much of the offseason developing their blown alcohol
engine program and have spent several days on the dyno.  The team also has a
rigorous test schedule planned prior to the season-opening CARQUEST
Winternationals in Pomona, Calif., Feb. 7-9.

Funny Car legends Don “The Snake” Prudhomme and Dale Armstrong will serve as the
official Hot Rod Heroes of the Goodguys 8th Eagle One Del Mar Nationals, April
4-6 at the Del Mar Fairgrounds. 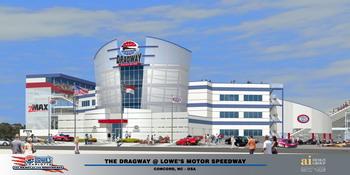 Unable to purchase NHRA, Bruton Smith, Chairman and CEO of
Speedway Motorsports, will own the four top facilties on the circuit with the
announcement of the construction of his fourth dragstrip, a facility already
being heralded as the “Crown Jewel” of the NHRA circuit just across the street
from Lowe's Motor Speedway. Smith estimates construction cost will run upwards
of $60 million dollars. With four facilities, Smith will now play host to five
NHRA events, or 20 percent of the schedule.

Appropriately, the NHRA has awarded Smith a premier date to
debut the as yet unnamed facility. The NHRA Carolinas Nationals to be held on
September 11 – 14 will mark the first event in the newly formated NHRA POWERade
Countdown to the Championship; a six race run among the top ten drivers in each
of the pro categories.

Thu, 2008-01-24 20:43
Defending NHRA POWERade
Top Fuel champion Tony Schumacher was recently spotted testing a Late Model
stock car at All-American Speedway in Roseville, CA, an activity he had hoped to
keep under the radar.  In truth,
Schumacher was doing nothing more than numerous other drag racers have done for
years.
Before he became
legendary for Land Speed efforts and his innovative Indy cars, Mickey Thompson
was a drag racer.  Before he turned heads
at the Indy 500, Danny Ongais was a Funny Car driver, just as are Ron Capps,
Cruz and Tony Pedregon and Gary Scelzi, all of whom have been spending time
going in circles, often in “real” competition.
Bill McAnally’s
self-named racing operation fields a series of NASCAR-like stock cars in
northern California.  While he confirmed
Schumacher’s presence at the track, he refused to go into any detail, citing
what he believed to be Schumacher’s desire to keep the whole thing quiet.  However, when we reached Schumacher, he was
more than willing to talk about his experiences.  And besides, we had spy photos
regardless!

The PSCA Mickey Thompson Tires Winternationals
event scheduled for this weekend (Jan. 25-27) at The Strip at Las Vegas Motor
Speedway has been cancelled due to difficult travel conditions throughout the
region.  The early cancellation was made so that racers would be spared
unnecessary risk and expense of travel in winter weather conditions.  Severe
storms in California also are affecting weather conditions in Las
Vegas.

"If the PSCA event was strictly for local racers
we would probably go ahead as scheduled and make every effort to complete the
event between rain showers," said Chris Blair, LVMS’ vice president of racing
operations.  "However, more than 80% of the participants at a typical PSCA event
live more than 300 miles from Las Vegas.  We have a lot of racers from Northern
California, Texas, New Mexico, Washington, Oregon, Idaho and Colorado who are
facing nearly-impossible travel situations with a pick-up truck or RV towing a
race car trailer."