Sandwiched between a 1969 Shelby GT500 Fastback and the very first 2008 Dodge
Challenger SRT8 2-Door Coupe is Lot 1330: the Chip Foose-designed 2007 Dodge
Charger R/T Funny Car that stole the show and countless hearts at the U.S.
Nationals as Mike Ashley drove the Eric Blake Faulkner tribute car titled
"Purpose Beyond Reason" all the way to the Winner's Circle.

The
storybook ending on Ashley's emotional win is about to be written at the hand of
the highest bidder tomorrow, Saturday, January 19, at the Barrett-Jackson
Classic Car Auction in Scottsdale, Ariz. Along with Hollie and Donnie Faulkner,
others will be boosting the bidding from the podium, hoping to raise both funds
and awareness of the pain suffered when couples lose a child before or during
the birth-process.

According to National Center for Health statistics,
every year in this country more than 39,000 babies are stillborn (delivered
without signs of life after the gestational age of 20 weeks). Added to that are
the facts that one in every five pregnancies ends in miscarriage and one in
every 102 live births result in death before the age of 28 days, totaling almost
one out of every 3-4 pregnancies in the U.S. that ends in a loss. The EBF Funny
Car has given a voice to those suffering and brought caring acknowledgement to
the tragic isolation and psycho-social needs of the families dealing with the
situation.

A former new kid in NHRA’s ultra-competitive Pro Stock category and two veterans
with double-digit series championships between them will be attempting to add
another overall title when 2008 competition begins next month.

Justin
Humphreys, a 2007 Road to the Future (rookie of the year) nominee, Bob Glidden
and Richard Maskin gave the assembled masses a glimpse of the RaceRedi
Motorsports Pontiac GTO team’s potential in the Auto Club Finals at Pomona,
Calif., in November.  The result – a final-round loss to new champion Jeg
Coughlin by a slender seven-thousandths of a second – has gnawed on the psyche
of Glidden and Maskin during the winter months.

So much so that Glidden
spent much of the “off-season” at Maskin’s Detroit-area DART Machinery
headquarters.  The engine shop’s goal is to provide more horsepower for
Humphreys when he mashes the pedal for the first time at Pomona in the CARQUEST
Auto Parts Winternationals, Feb. 7-10.  Maskin motors have won 65 national
events in Pro Stock and Pro Stock Truck and three Pro Stock championships with
Jim Yates (1996-97) and Jeg Coughlin (2000).

Our staff has arrived safely in Las Vegas for the annual Nitro Blast Off
test session hosted by Las Vegas Motor Speedway. We'll bring you same day
coverage as well as the latest new looks. Currently there are three nitro cars
with another expected to arrive this morning.

The Kalitta Motorsports group with David Grubnic and Scott Kalitta as did
the Skoal-sponsored Larry Dixon were the three already on the grounds. Del
Worsham is expected to roll in today for three days of testing.
Torco's CompetitionPlus.com will bring you same day coverage of this
event.

South Georgia Motorsports Park season-opening National Dragster and Junior
Dragster Challenge, set for this weekend, January 19-20 has been postponed due
to inclement weather and a poor weekend forecast.  The event, which was also
pegged as the season’s first Summit E.T. Points series event for the track’s
season-long points series, will be rescheduled although a date has not yet been
set.

Bart
Price told Torco's CompetitionPlus.com last year that he had a new
sponsor, but kept it all quiet until the right time. He didn't want to
jinx the program by announcing early. Not only did he gain a new
backer, he also acquired a new partner. On Thursday, he let the cat out
of the bag.

"This has been a very exciting off-season for us," Price said. "In
addition to bringing Greg Hill aboard as an equity partner, we've
established relationships with two companies that are new to drag
racing in Attitude Apparel and Throttle Racing Products. Greg and I
have been friends for years and (have) spent a considerable amount of
time comparing notes. We concluded that our teams were in very similar
situations and determined that combining our resources made a lot of
sense."

Price described Attitude Apparel as a brand focused on marketing
lifestyle apparel and related products to all kinds of enthusiasts.

"They've got some really exciting plans and products that I'm sure drag race fans will enjoy," he said.

Today at the historic Marconi
Automotive Museum, EMCOR Service/Mesa Energy Systems Inc, the leader in HVAC
services throughout California
announced that they have reached an agreement to become primary sponsor of the
Jam-Air Motorsports Alcohol Funny Car team with driver Will Martin for the 2008
Season.

“Today marks the beginning of
an exciting year for EMCOR Service/Mesa Energy Systems. I started Mesa Energy
25 years ago in a borrowed garage. Today we are the largest HVAC Services
provider in California
and are quickly becoming the premier Energy Solutions provider” said Senior Vice
President & founder Charles Fletcher.

Acknowledged as one of the hardest working men in motorsports, there is
nothing unusual in the fact that Hall of Fame Pro Stock racer Warren
Johnson will be tending to a race car this weekend.  After all, with
the start of the 2008 POWERade Drag Racing season just over three weeks
away, virtually every team across the country will be hard at work
making final preparations for the NHRA season-opener in Pomona, CA.

In this case, however, The Professor’s efforts will not be focused on
his familiar GM Performance Parts Pontiac GTO, which he has left in the
capable hands of his crew in Sugar Hill, GA.  Instead, the six-time
NHRA Pro Stock champion will take part in the sale of one of his former
mounts, a 1987 Olds Firenza which will be auctioned off as part of the
famed Barrett-Jackson Collector Car Auction in Scottsdale, AZ.

“I was originally contacted by Norm Bierhorst, who had bought one of my
old Firenzas,” said Johnson.  “After deciding he was no longer
interested in racing Super Gas, Norm wanted to restore the car to its
original condition, and asked what I might have.  After looking around
at the shop, I was able to supply most of the drivetrain from a
Firenza, which I still had in storage.  I provided him with a complete
engine from the carburetors to the dry sump, as well as the clutch and
other pieces that were totally unique to that body style.

REBOUNDING FROM A CRASH; YEARS LATER

Outlaw 10.5 Racer Planning Return to Competition Thanks To Friends 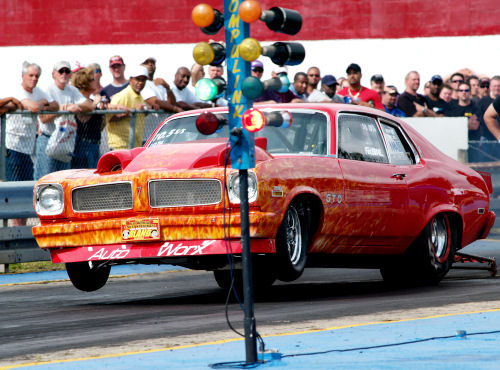 Some accidents can’t be erased at the snap of a finger.

Canadian Outlaw 10.5 racer Eddie Timal will always be reminded of what
could have been a fatal accident during the 2005 World Street Nationals
in Orlando, Florida. Timal’s classic turbocharged GTO struck the Armco
guardrail and became airborne before barrel-rolling violently down the
track sidelines.

Timal can’t seem to shake the memory of that accident. Neither can he shake a desire to return to competition.

A dream will be realized this October when Timal will return to Outlaw
10.5 Competition at the 2008 Orlando World Street Nationals. When he
launches in a brand-new 2000 C-5 Corvette, somewhere in the back of
Timal’s mind will be the day he became the subject of a violent crash sequence shot by the leading photographers.

Teams participating in this major test
session will receive as much as a 50-cent per gallon discount on drum orders
before February 29. The pre-ordered fuel will be delivered on Thursday morning of
the event.