For the next three weeks, Torco’s CompetitionPlus.com will conduct its inaugural War Stories Showdown presented by Mach Series Accelerator. The veterans of yarn spinning are paired for what promises to be a series destined to produce the finest behind-the-scenes stories.

It will be tough to top the season that GM-backed racers had on the NHRA
POWERade tour this past year, but 2008 will see several teams set on defending
their crowns and others looking to get back on top.  With Jeg Coughlin Jr. and Tony Pedregon
leading the way for Team Chevy in Pro Stock and Funny Car, respectively,
Chevrolet won the 2007 NHRA Manufacturers Cup for the 16th time in
2007, the most of any automobile manufacturer.
Multiple victories at NHRA divisional and national races by Chevrolet’s
strong contingent of sportsman racers played a key role in a GM nameplate
earning the prestigious Manufacturers Cup for the 25th consecutive
year.

Coughlin
returned to a full season of competition in Pro Stock after nearly a year away,
but the 2000 and 2002 class champ performed like he never left and put on a
late-season surge in the inaugural Countdown to the Championship points format
to add a third jewel to his crown with the 2007 NHRA POWERade Pro Stock
title.  He joins a select group in Bob
Glidden, Warren Johnson, Lee Shepherd, Greg Anderson and Darrell Alderman as the
only Pro Stock drivers in the history of the sport to win three or more
titles.

This was
the first championship for team owner Victor Cagnazzi, and he returns a
formidable one-two punch in 2008 with Coughlin and teammate Dave Connolly in
their yellow-hued Chevy Cobalts.

He is survived by his wife Ginger and mother Alise.

Six-time NHRA Champion tells Speedfreaks.tv why he stepped away from driving again …

Kenny Bernstein said it was a personal thought process that inspired
him to step away from driving his Monster Energy drink Funny Car and
subsequently hiring veteran Funny Car driver Tommy Johnson, Jr.

Even though Bernstein adamantly states in the interview that his
decision is not a retirement, he does add that the facts are the facts.

“We eliminated the word from our press release - retirement,” Bernstein
said. “We knew no one would believe it any way. I do feel that way this
minute and I don’t think that will change. There’s a big difference in
that feeling this time and that it has never been there before. There’s
that feeling and I’m going to be real frank about it, it’s kind of hard
to say it, but it’s the facts of life.

If you're a fan of the classic nitro burnouts then you will appreciate
this compilation on YouTube from 1975 and 1976 from Santa Pod in
England. This four minute video also features fire burnout footage.

For the next three weeks, Torco’s CompetitionPlus.com will conduct its inaugural War Stories Showdown presented by Mach Series Accelerator. The veterans of yarn spinning are paired for what promises to be a series destined to produce the finest behind-the-scenes stories.

If you had the opportunity
to attend the PRI show in ,
then you probably heard the buzz in the drag racing community: mountain motors
will be bigger and badder than ever in 2008.

Mountain motors, once
found only in Pro Stock & Pro Mod, have become commonplace in many
different classes going all the way down to Super Comp and Super Gas. Their use
continues to rise in proportion with the influx of centrifugal blowers and
turbochargers in various heads up classes.

DRAG RACING COMMERCIALS - THEN AND NOW

During this off-season, YouTube.com generally draws a lot of
entertainment time from bored drag racing fans. We found two drag
racing related videos that ought to warm your heart when you take into
account just how far the sport has progressed. The first video is circa
1974 with Top Fuel dragster footage reportedly shot at the legendary
Orange County International Raceway. The second features more modern
day footage. 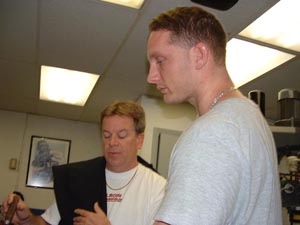 Patrick Heywang, a valued
member of the Wilson Manifolds team, lost his life on Saturday, December 15,
the end result of a fatal automobile accident on December 9.

Heywang underwent several
surgeries during the past week and remained on life support.

“We considered Pat a
family member rather than a 15 year employee at Wilson Manifolds,” said Billy
Carroll of Wilson Manifolds. “His dedication, work ethic and input have been
instrumental to the success Wilson Manifolds has experienced since he joined
the company.  Although Pat’s primary function was in the porting room, his
contributions were felt in every service we offer.  Keith often had Pat
work on special projects because he knew Pat wouldn’t sign off on a project
that was anything less than the best in quality and performance.  Pat’s input was invaluable in our New Product
Development Engineering meetings including our nitrous products.

“Pat was one of our top
airflow engineers and he played a large part in the manifold development for manufacturers
and teams in all forms of professional motorsports. (John Force Racing, Kalitta
Racing, Dodge and
just to name a few of them)  Keith often
chose Pat to travel with him to the
test sessions with Joe Gibbs Racing to help with their restrictor plate
program, to Mooresville to assist with the Ken Black Racing Team of Greg
Anderson and Jason Line, and other private test sessions.  In addition to
the high profile teams Pat often worked with, he always enjoyed working with
the weekend racers.

With the addition of a number of thrilling new events and the
return of many popular favorites, Bristol Dragway’s action-packed schedule will
keep the strip rocking in 2008 from March through September.

Bristol Dragway’s signature event, the O’Reilly NHRA Thunder
Valley Nationals presented by Q, brings the cars and stars of NHRA to town May
16-18 for one of the most anticipated races of the season.  Those in attendance
will be treated to high-speed action in Top Fuel, Funny Car, and Pro Stock, as
well as many exhibition and Sportsman classes.  Among the drivers fans can
expect to see are five-time and defending Top Fuel champion Tony Schumacher,
defending event champion Brandon Bernstein, and Funny Car star and 2007
Rookie-of-the-Year, Ashley Force.

The Bristol Dragway Street Fights series returns for its
eighth year and will feature 23 events.  The Street Fights schedule changes
slightly with eight races slated for Saturdays, and the remaining events running
on Thursday evenings.  Street Fights raises the curtain on the 2008 Bristol
Dragway calendar with the season opener on Saturday, March 22.  The final Street
Fights will take place Saturday, September 11.  During the warmer months,
special summer hours at the Saturday events will give drivers the chance to race
longer into the evening.