While some things are
understandably different when it comes to tuning for the monostrut car of David
Powers, others remain painfully the same. The parachute still works better at
the finish line as Hot Rod Fuller found out in Monday’s testing at Phoenix. He has recorded a best 4.530, 326.40.

The fourth day of testing
during the NHRA National Time Trials at Firebird Raceway produced good results
for some and continued frustration for others.

Fram-sponsored superstar
Cory McClenathan was the quickest at the Monday Phoenix session with a 4.473, 331.45.
Tony Schumacher remained atop the Top Fuel pecking order with an early-lifting 4.442
at only 326.08.

There has been a major battle going on for the last few weeks at South Georgia Motorsports Park
and it hasn’t been for the winner’s circle. It’s the track record that several
of the leading NHRA Pro Stock racers are grappling for.

The WEST COAST HOT ROD ASSOCIATION recently announced the debut of their new
association, formed to give West Coast “Heads Up” doorslammers another place to
race. The plans high payouts and a variety of heads-up classes for 2007.

“As racers
gear up for the 2007 season, they now have a choice in where they race,” Series
Director Don Chavez said. “The WCHRA has not been formed in opposition to the
PSCA, like some think, we have deliberately avoided any date conflict to allow
racers participate with both sanctioning bodies. Our plan is to radically
promote the way the West Coast racers are perceived in the drag racing
world.  This association was formed ‘For Racers,
By Racers’.

Team owner and driver Mike Ashley confirmed that Dean Skuza will be
also be driving his Torco Race Fuels-sponsored Dodge Charger in Las
Vegas as well as other testing opportunities. According to Ashley, Dean
may be taking off the month of March because they are expecting a child.

The F Troop 1933 Willys, owned by
Stephen Timoszyk of Belleville, Michigan, has been selected by the Michigan
Hot Rod Association to receive the Meguiar's preservation award at this years
Detroit Autorama.

The award, started in 2001 at the
events 50th anniversary, is received by the best example of a
preserved vintage Hot Rod.

Naylor, driver of the Jagermeister Dodge
Stratus, was invited to the convention to give East Coast media an inside look
at the NHRA POWERade Drag Racing Series from the business standpoint and the
drivers’ seat. Representatives from NHRA, NASCAR, IRL and other series were in
attendance.

On his sixth-ever run in a Top Fuel dragster,
20-time NHRA winner Whit Bazemore
earned his NHRA Top Fuel license. He is now licensed to compete in both nitro
categories, Top Fuel and Funny Car. Bazemore raced his Matco Tools Iron Eagle
dragster to a performance of 4.544 seconds at 326.24 mph on his first attempt
Sunday afternoon at Firebird International Raceway to meet the requirements
needed to earn his competition license for drag racing’s premier
category.

“It feels good to get the licensing out of the way,”
Bazemore said. “You never know what can happen with these cars. Now we can
concentrate on improving the performance of the car. It was good experience for
me to run those two 4.54s. I got some good seat time in the car on Sunday. Like
I keep saying, it’s so different than a Funny Car. It was important for me to
make those two good runs today.” 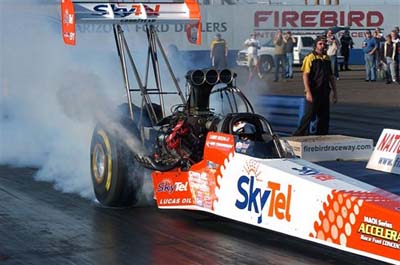 eye-popping-orange SkyTel Dragster that
made its debut at the National Time Trials at Firebird International Raceway.

It's no longer a secret that the business pagers company has stepped up
to sponsor the two-time Top Fuel champion, who saw longtime sponsor Miller Lite
drop from the sport last year. However, Don Prudhomme Racing hasn't made any
formal announcement heralding the deal that drew so much
speculation.