Evan Knoll may have many irons in the fire when it comes to business and racer sponsorships, but the one thing that grabs his heart the most has nothing to do with either.

According to our source close to the negotiations, a proposed drag strip near the Ocala, Florida area was voted down by Marion County commissioners in whose jurisdiction the facility would lie.

The Pro Modified Racing Association will be returning to Grand Bend in 2007.

The PMRA is pleased to be heading back to the Grand Bend Motorplex on the Labor Day weekend as part of the track’s big two-day event.

“We were very pleased with the PMRA this year, it’s going to be great to have them back to our annual Labor Day Weekend show,” said Grand Bend’s Track Manager Ron Biekx. “We had a good car count and our fans will be looking forward to their return.”

Johnson was recently hosted by Bill Gates and
several other company executives at Microsoft headquarters in Redmond, Wash.,
where they revealed newly-built Brad Hadman dragster.

“The people on the
Windows Vista team are amazing, and they have worked so hard on putting this all
together,” Johnson said. “They have made a dream of mine come
true."

Amidst rumors that he was looking
to unload his Pro Stock operation and the contract of driver Dave Connolly,
team owner Evan Knoll confirmed the team will return in 2007 to contend for the
NHRA Pro Stock World Championship.


“I did a lot of soul
searching and quite a bit of thinking since Pomona,” Knoll said. “I came to the
conclusion that with the new points structure that a top three team can have as
good of a chance to win this thing as one that has led all season long. I won’t
apologize for the comments I made earlier in the year suggesting that Ken Black’s
team was on another level because they were and still are. 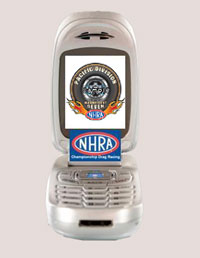 NHRA announced that it has launched the first phase of its mobile storefront for NHRA fans to access a growing library of NHRA wallpapers, ringtones and interactive applications.More than 20 NHRA specific wallpapers, including the traditional NHRA oval as well as other vintage NHRA logos, along with ringtones for a fuel car launch and idle, among others, are now available for download at www.nhra.com.

Both wallpapers and ringtones are being offered to consumers for a flat rate of $1.99 each.

Once the NHRA season concludes, the 12 off weeks in the months of November,
December and January are referred to as the off season. For most NHRA teams,
there is no off season. Other than some time off around the holidays, NHRA teams
spend the winter months gearing up for upcoming 23-race cross-country grind and
preseason testing at Las Vegas and Phoenix.

For an expanding
race team, as is the case for David Powers Motorsports, timing in those 12 short
weeks becomes even more crucial. A few months back, it was announced that Matco
Tools would be joining David Powers Motorsports with a second Top Fuel dragster
to be piloted by 20-time NHRA Funny Car winner Whit
Bazemore. Having watched “Hot” Rod Fuller drive his
Valvoline-backed rail to a fifth-place ranking in the Top Fuel division in 2006,
Powers is even more energized about the ’07 season with his Lee Beard-led
two-car effort.

“Things are finally
coming into fruition,” Powers said. “Before that, it’s just a vision or a dream.
Once things start arriving at the Indy shop, it becomes a reality. It’s like
seeing your dreams come true.”

On Monday, November
27, the Powers camp will take delivery of three Brad Hadman chassis and
one-piece carbon fiber Top Fuel dragster bodies. Two chassis will be for
Bazemore’s Matco Tools team, while the third chassis will serve as a spare for
the “Hot” Rod Fuller-driven dragster. Shortly thereafter, two bodies will be
transported to Olson Paint & Body in Peru, Ind., to be painted by veteran race painter
Brian Olson before receiving vinyl graphics from Indianapolis-based Freelance
Lettering, Inc. to complete the look of the new Matco Tools Iron Eagle
dragster.

“Right now, we’re
full speed ahead getting everything prepared for next season,” Bazemore said.
“It’s different starting a team from scratch as opposed to just rebuilding.
We’ve hired some very talented people and all the parts are rolling in the door
everyday. It’s an exciting time for the new Matco team. It’s like Christmas
every day at the shop leading up to testing in January. I can’t
wait!”

Last week, the team
received a new 56-foot transporter from Henderson, Texas-based Competition
Trailers that will house the Matco Tools Top Fuel team. The Matco Tools pit
crew, which includes championship members from both Larry Dixon’s Miller Lite
team and Gary Scelzi’s Oakley Funny Car crew, will begin at Powers’ Pittsboro, Ind. race shop on Nov. 27. The plan is for the
Matco Tools Top Fuel team to debut at the fifth annual Nitro Blast Off, Jan.
19-21, 2007, at The Strip at Las Vegas Motor Speedway where Bazemore will see
his first seat time in a Top Fuel car.

The DPM team also
will add a tech trailer to its growing pit compound, along with a modern
hospitality area that will serve up to 200 Matco Tools employees and guests. The
hospitality setup will offer a unique outlook to its valued guests. With the two
Top Fuel dragsters situated on each side, guests will have an unobstructed view
of both race teams as the pit crew members work and prepare the 8,000 horsepower
nitro-burning machines

The parade is scheduled to begin at 10 a.m. on
Montana Avenue between Ochoa
and Copia Streets in El Paso, Texas. Last year,
over 350,000 people attended
this special event preceding the Sun Bowl in El
Paso, scheduled this year to
be played on Dec. 29.