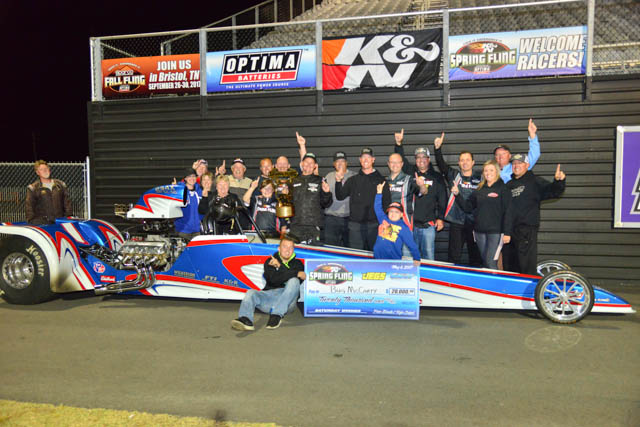 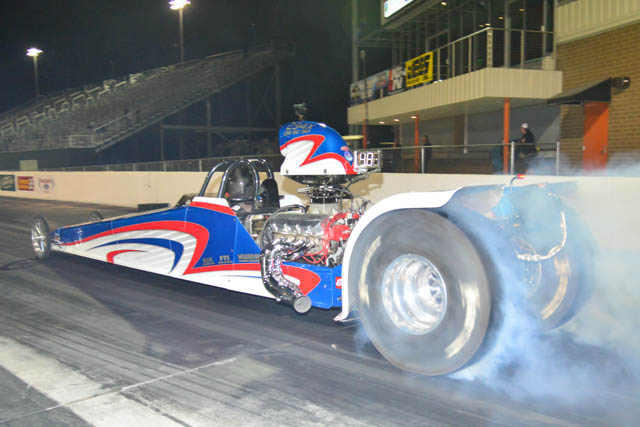 Next, the traditional ‘Fling Family Foto gathered some of the assembled racers and their families at the head of the staging lanes for a remembrance of the event and the final eliminations day was off to a great start.

Survivors of round six were Colby Fuller who defeated Tommy Plott’s dragster, Bug McCarty, Troy Brewer, Mark Horton, Chris Reynolds and Plott in his Mustang, along with Hoff who earned the bye run.

Round seven found McCarty with the bye to the semifinals, Fuller, Brewer and now announced as the Spring Fling MVP award winner Tommy Plott. 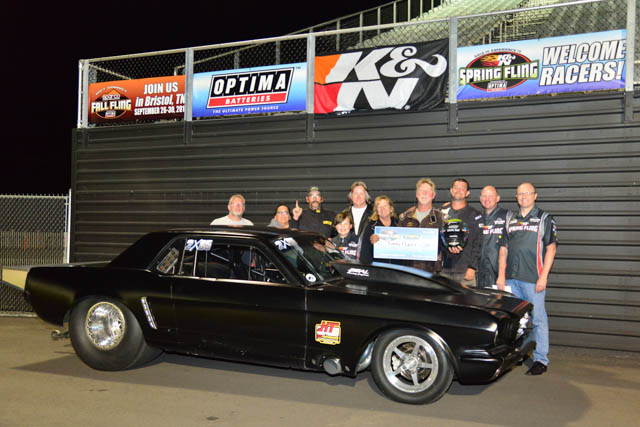 As the semifinals shaped up, the lone dragster of McCarty was outnumbered by the door cars of Fuller, Brewer and Plott. The semifinals were sort of anticlimactic as it was littered with two red-lights as Brewer lit the red bulb to move Plott to another Spring Fling final, while Fuller did the same to make the finals a dragster (McCarty) against a door car.

The red-light showed its ugly head one more time in the final as your MVP of the week Plott turned it -.001 red to hand the win to McCarty.

“I really want to thank the entire ‘Fling and Galot staff for putting on such a great race,” said McCarty.

After the finals, co-promoter Kyle Seipel said, “This was a great foundation for us to build from. I’d say that probably 75-percent of the racers who came here are new to our ‘Fling races so that opens us up to new customers. In addition, they’ve done nothing if not rave about how nice Galot Motorsports Park and I’m sure that will bring in more racers in the coming years. So, the news is that we’ll be back here once again next year.

“As usual, we can’t thank those enough who support us at every race, both racers and sponsors,” added Seipel. “Without them, all of this would not be possible. Now our attention will be on the Sparco Fall Fling presented by Optima Batteries in Bristol on September 26-30 and we hope to see everyone there again.”