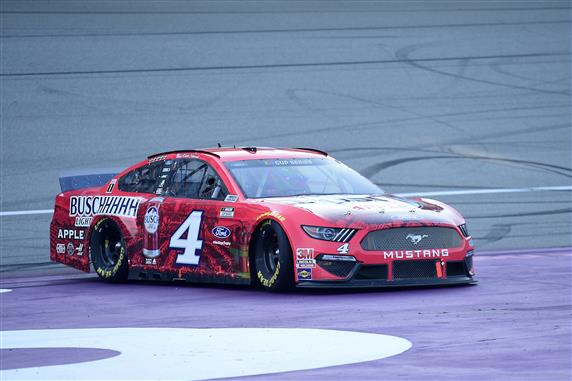 Kevin Harvick’s victory in Sunday’s Consumers Energy 400 at Michigan International Speedway gave the No. 4 Stewart-Haas Racing Ford team a weekend race sweep and a whole lot of momentum as the NASCAR Cup Series closes out its regular season schedule at the end of this month.

It was the fourth win in the last five Michigan races for Harvick and his weekend double earned the prestigious Heritage Trophy for Ford Motor Company – honoring the weekend’s top make in America’s auto manufacturer’s backyard.

Harvick was able to pull away from the field on a restart with 30 laps remaining but had to hold off a charging Denny Hamlin in a duel between the series two winningest drivers in the final handful of laps. Ultimately Harvick took a .093-second win over Hamlin.

"That was a big challenge," Harvick acknowledged of the final lap contest with Hamlin.

"When you look at my team, we’ve been together going on seven years now and you look at the confidence everyone has in each other, the details of the race cars, everything that goes into everything that we do, that’s untouchable," Harvick said of his team. "That’s what it takes, details to make these race cars go fast."

Hamlin, a five-race winner in 2020, climbed out of his No. 11 Joe Gibbs Racing Toyota disappointed in the outcome, but well aware that the head-to-head battle between his team and Harvick’s team was foreshadowing an exciting season championship contest.

"Once we finally got to second, I knew we had something for them," Hamlin said. "I just got stalled there, he was tight and I was tight and we were better, that’s for sure. But he just had the track position and could control the lanes there."

Of the tight championship race, Hamlin said, "Proud of this FedEx team, just hate giving up wins to the No. 4.

When asked if they bring out the best in each other, "No question," Hamlin said of contending with Harvick, adding, "I’ve got tremendous amount of respect for everyone on that team and Kevin. As we’ve gotten older, we’ve gotten wiser and learned to really appreciate what each other does on the race track and obviously, they’ve having a great season as well."

Not only did Harvick become the first driver in series history win back-to-back races in consecutive days at the same track but he did it by leading the most laps each day as well. He paced the field for 90 of the 156 laps Sunday. And his Stage 2 win was his third stage victory of the weekend after he swept both stages on Saturday. Harvick’s Stewart-Haas Racing teammate Clint Bowyer won the opening Stage on Sunday.

The start to the race was calm – the first two of the five total cautions coming out only for the scheduled two stage conclusions. However, just past the second stage, on Lap 96 Team Penske teammates Ryan Blaney and Brad Keselowski collided while contesting the lead.

Keselowski was running low on the track hoping to get around race leader Blaney but his No. 2 Ford shot up the track making contact with Blaney’s No. 12 Ford – both cars ended up in the wall and ultimately into the garage. They were scored 38th (Blaney) and 39th (Keselowski) in the 39-car field.

"Just slipped, lost the back a little bit and tried to collect it and he was there and I wiped him out and myself," a dejected Keselowski said after being checked out in the Infield Care Center. "I feel terrible for everyone at Team Penske and especially for Ryan Blaney. Gosh, he didn’t deserve that."