BOBBY BENNETT: DRAG RACING FANS NEVER HAD IT SO GOOD

It's hard to see the future when you're stuck in the past.

Case in point, when we first started forming CompetitionPlus.com back in 1999, having an internet magazine ranked right up there with a self-steering car, it was just future crazy-speak.

It's still hilarious when recalling the first time we approached a company to advertise us, and the response was, "How are you going to sell me an ad to a magazine that I can't take the sh**ter with me? I don't think this internet thing is going to catch on."

Little did the forward-thinker know -- and I say this with extreme sarcasm -- technology for cell technology and the World Wide Web was rapidly advancing. We were on the cusp of smartphones and broadband internet, and with that, the birth of that elusive crapper computer.

With this foundation established, I am just going to say it: Many drag racing fans are just like that individual who cannot see what's on the road ahead because his eyes are glued to the rear-view mirror.

Much to the chagrin of those proclaiming death is near and that the sport's golden age is long gone, I believe today we are living in the era for which those folks clamor.

Yes, whether you recognize it or not, you're living in the golden age of drag racing. Before I begin my presentation, some will indeed throw out their opinion on social media without reading what I have to say. It is what it is. Folks used to say you can't judge a book by its cover, but today, it's perfectly fine to just a story by the social media description.

Drag racing fans never had it so good.

So the first aspect is multimedia.

Let's look at television. Yes, I'm one of those who complained of drag racing getting pre-empted by obscure live sports when on ESPN. I forgot what it was like as a kid growing up in the 1970s in Spartanburg, South Carolina. Long before there was a button on the remote where you could see television programming, a weekly pocket-sized magazine called TV Guide would tell you what was going to be featured on ABC's Wide World of Sports, NBC's SportsWorld, and the CBS Sports Spectacular, or, check that ad box in National DRAGSTER to let you know when the next Diamond P broadcast would air.

Today, a person could conceivably immerse themselves all day in just watching drag racing on various YouTube channels or the NHRA's Roku presentation.

Dave McClelland and Steve Evans were iconic and, to some drag racing fans, even God-like because they delivered what drag racing fans were starved for -- TV content. That was a large part of their appeal, and they were great at what they did.

But, you know who else is great at what he does? Brian Lohnes. He's McClelland and Evans all wrapped up into one. There are many other talented personalities out there, but Lohnes is on a level of his own.

I was thumbing through an old episode of National DRAGSTER and happened across an article which proclaimed, "Expanded Television Coverage for 1980 - Record Eight NHRA National Events on TV!" Now there's nearly three times the amount, plus replays -- yet eight TV races is considered by some to be the golden days of the sport?

Do you know what the problem with some of today's drag racing fans is? They are spoiled. They never had to thumb through a 1979 copy of National DRAGSTER to find out when the syndicated presentation of the 25th anniversary NHRA U.S. Nationals was going to be ... find out when a race that finished on Labor Day didn't air on TV until December.

Even beyond the television, drag racing fans can watch an event from daybreak to well beyond sunset with the advent of the internet.

Moving on, I can remember the story of legendary drag racing journalist Jon Asher interviewing IHRA founder Larry Carrier and asking him a pointed question, "What's the most beautiful dragstrip?"

Expecting Carrier to respond with his Thunder Valley Dragway in Bristol, Tenn., the quick-witted sanctioning body president offered, "A full one."

A full dragstrip is a rarity these days.

Grandstands can be deceiving. Many take the absence of full dragstrips to mean the sport is in trouble. To this point, I've also seen sparsely populated NFL stadiums and other venues. Are they on the way out? Nope.

The challenging thing about raising the bar is that it's a continual process. I remember seeing those grandstands in the 1970s at NHRA and IHRA events packed to the hilt with racecar-craving fans. When most of those facilities upgraded over the years, they did so with vastly larger grandstands. 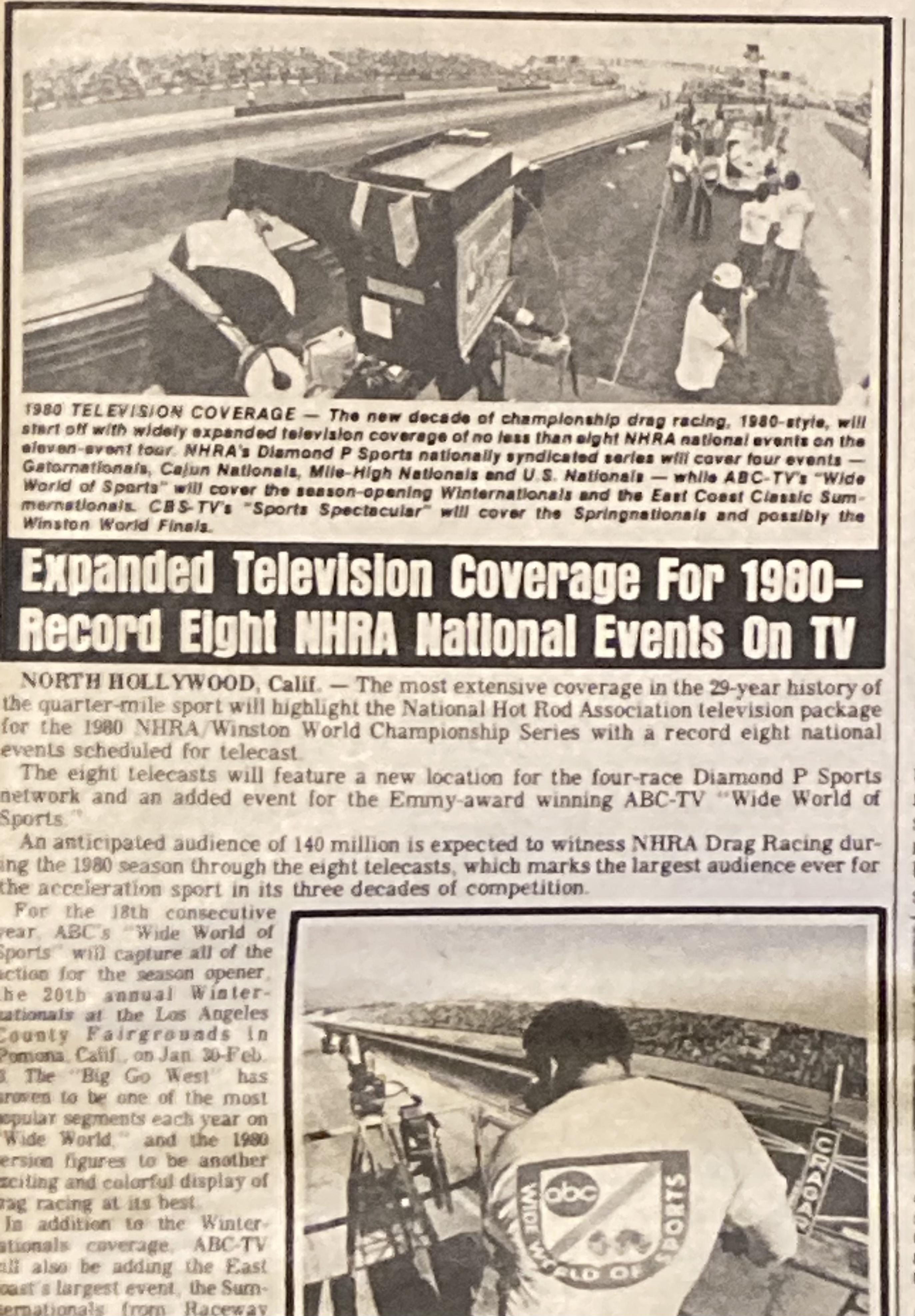 Let's take, for instance, last September's NHRA Carolina Nationals near Charlotte. There were significant football games at the high school and college levels on Friday and Saturday. The NFL's Carolina Panthers were undefeated and also playing at home Sunday. Throw in other factors such as a carnival and other activities, and you will see why one could shoot a cannon in the stands and not disturb many folks.

Maybe it was a lead-in that resulted in the windfall of exposure, but it was a significant victory for the straight-line sport in the big picture.

The product on the track has undergone a tremendous evolution over the last four decades, with costs spiraling out of control from Top Fuel to the Lucas Oil Drag Racing Series. The Funny Cars are largely unrecognizable, and the Pro Stock division is dominated by one manufacturer. Much of the Lucas Oil Drag Racing Series is automated. I remember when some NHRA events presented eight-car fields; something NHRA doesn't entertain even when faced with short fields. It was easy to field full fields when there were only eight races in a season as opposed to 22.

Some call it a death spiral. I call it evolution.

So if we can compare apples to apples, I don't hear many folks complaining about their flat-screen, big-screen smart TVs because they aren't like their old black and white with a rabbit-ear antenna. That's the difference between today's professional race cars and those back in the 1970s.

If you complain about today's prevalence of Camaros in Pro Stock, then you should have been complaining about Bill Jenkins' Vegas and any other compacts racing in the class in the early 1970s that didn't come from the factory with a V-8. Indirectly, the desire to go quicker and faster than anyone led to today's Camaro taking over. The Camaro provides the best chance to win, and isn't this the reason drag racing exists? RELATED STORY: PRO STOCK - HOW WE GOT TO WHERE WE ARE

While NHRA gets most of the blame for today's ills, I hardly fault them for everything. They never forced drag racers to spend big money to race. Those of us who grew up in the 1970s drag racing scene clamored for the next level, but the next level comes at a price.

So our Funny Cars don't look like production cars. That's the price you pay for bursts of 3.8 seconds at 320 miles per hour.

So our fuel cars don't run to the quarter-mile. That's hardly something to fuss about if it makes a drag racer return safely to their loved ones.

So our broadcasts might be delayed by another sport. At least we have same-day broadcasts.

So the grandstands aren't always packed, but we have several beautiful facilities to host drag races.

So our sport isn't perfect, but we have a major league sport worth our love and admiration.

I miss 1976 drag racing. Do you know what else I miss? I miss 59-cents-a-gallon gasoline. My friends, those days are gone, never to return.

So what can we do?

Enjoy the golden age of drag racing where drag racing coverage is plentiful, and with many more options than were available in 1976.