Initially, the news about Wild Horse Pass Motorsports Park closing after the NHRA’s 2023 visit there to Chandler, Ariz., sounded terrible.

The mere fact the NHRA delivered it in a press release at 7:30 p.m. Pacific Time Friday (10:30 p.m. Eastern Time Saturday) smacks of damage-control mentality. It’s an old public-relations ploy: “Let’s hope nobody sees it or at least let’s mitigate the backlash.” Granted, we have no background information or any logical explanation why the timing is so suspicious, but it doesn’t matter, really.

The point is the NHRA has lost another venue. By that last suburban Phoenix race, five racetracks will have dropped off the circuit in six years. For various reasons, it permanently lost dragstrips at Englishtown, N.J., in 2018; Joliet, Ill., in 2020; and Commerce, Ga. (near Atlanta) this year. Houston is hosting its final race late next month, and by the end of the 2023 campaign, Phoenix (which has been a regular stop since 1985) will have closed its gates.

The NHRA downplayed reports that surfaced in January 2021 that a master-planned development on the Gila River Indian Community at the southwest quadrant of the Interstate 10-Loop 202 interchange – the site of the longstanding dragstrip that used to be called Firebird Raceway. A prominent SEMA member privately shared speculation in the Phoenix area that the Gila River Indian Community might be planning to raze the current dragstrip and build a new racing venue on another, less-economically strategic piece of its property – and that if that plan fell through, an unnamed investor was poised to build his own facility farther west on I-10, near the Phoenix suburb of Buckeye.

Jeffrey Young, NHRA’s vice-president of marketing and communications, said, “Don’t know anything about that. Hadn’t heard that.”

So who knows whether Arizona and Southwest drag racing fans have any hope of the Camping World Drag Racing Series coming back to the Phoenix area anytime soon?

But overall, this could have been a moment of opportunity for the NHRA. But the sanctioning body appears to have missed it. Rather than use a fresh paradigm, it stuck to the familiar, tried-but-not-necessarily-true way of thinking that many say is not helping the sport grow.

This could have been the moment that the NHRA committed itself to a repackaging, remarketing, rejuvenating effort. That’s what it’s going to take to survive in a rapidly-changing entertainment landscape.

Rather than take a defensive stance to suggestions, the sanctioning body decision-makers ought to examine why it isn’t capitalizing on the undeniably electrifying product it has to sell. It’s pure engineering genius to make a race car blast at 5Gs from zero to 330 miles an hour in less than four seconds and jerk to a slowdown roll at negative-5Gs faster than anyone could read this long-winded sentence. It’s an almost indescribable spectacle that engages – amplifies – all of a person’s senses. It’s unforgettable. It’s addicting. It’s a “make one mistake and you’re done” pressure-cooker. It’s the epitome of extreme and instant gratification and perpetual motion all at the same time. And it’s right smack in the entertainment wheelhouse of the very demographic the sport needs to target.

So why is the NHRA not marketing that? Former Funny Car driver Dean Skuza said, “We don’t conserve fuel. We don’t conserve tires. We don’t conserve nothin’! What’s more American than that?!” And former Pro Stock racer Tom Martino called these cars “rolling fruit carts,” saying the driver needs to use it all up or it will spoil. Tell people that. Tell them how these nitro-class drivers compute their fuel in gallons per mile instead of miles per gallon. At the fainting-inducing prices we’re forced with at the gas pump these days, that’s almost unfathomable. Tell them what Tony Schumacher said about the launch: “It’s like sitting at a stop light and you get hit from behind by a Mack Truck that’s going 100 miles an hour. The only difference is I’m expecting it and you’re not.” Tell the people all this stuff.

And once they’re curious enough to buy tickets, make their experience at the racetrack leave them wanting more. Make them want to come back and bring friends and watch it on TV every chance until the circus comes back to town the next year. Go. Enjoy. Watch. Repeat. 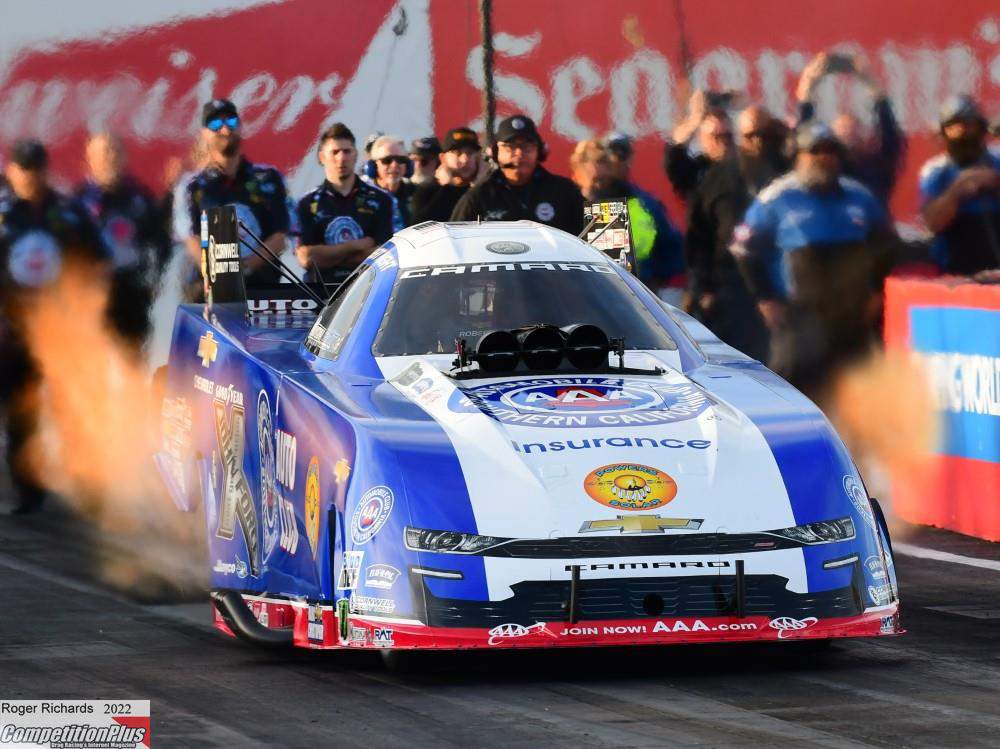 In a guest appearance last week on The Capital Sports Report Facebook Live program, three-time champion Larry Dixon offered two simple ways not only to give the fans a memorable, repeatable, sustainable experience but also to cut costs all around: have fewer races and make each race just two days.

He said he grew up watching his father, Larry Dixon Sr., race along with his other heroes Don Garlits, Don Prudhomme, and Shirley Muldowney.

“They were Saturday night races. Our sport – with the header flames – there isn’t another motorsport in the world that has that,” Dixon said. “And I think we should frickin’ grab onto that and take advantage of that.”

He has heard the argument that Friday-night qualifying can produce spectacular performances but doesn’t yield useful data for race day because conditions are different. Then change it, he suggested: “If night qualifying doesn’t make sense, then let’s make a show that makes it make sense: Friday night qualifying, Saturday night racing. And if it rains out, you got a Sunday rainout date. Or you could offer Sunday for testing for the next event [with the public invited].”

He knows his idea has been voiced before, multiple times by multiple drag-racing fans – all of whom have the same motive as he said he does. “I love the sport. I want to see it keep thriving. Let’s do things to keep up with our demographic, our fan base.”

A two-day event, he said, would cut some of the budget for race teams and track operators. If the grandstands were crammed full of spectators for each of two days, that likely could generate as much income as or probably more for the track owners than an event with three mediocre or pitiful attendances (and with the latter, the operator still is paying full freight for labor). So it slices overhead costs for the track and for the race teams, too.

A Friday-Saturday show, Dixon contended, would be “giving the customer more value on a single day. If we could make a home run on those two days, it would make sense for the labor [costs] and for the teams.”

Rather than a 22-, 23-, or 24-race schedule, a 15-16-race lineup would reduce the budget teams would have to develop and manage. That would reduce a team’s ask when it comes to finding sponsors. And, as Dixon mentioned, as well, that might enable the NHRA to secure title sponsors for every race. In this year’s 22-event campaign, exactly 11 races are sponsored and 11 are not.

So his points are logical. But the NHRA appears not to be thinking of bold, refreshing ideas. That oddly timed press release said, “As NHRA looks toward the future, it will focus on venues not currently on the NHRA Camping World Drag Racing Series circuit to fill the spot of the Phoenix event, starting in the 2024 season.” And President Glen Cromwell was quoted as saying, “We are working on several new destinations. With interest from multiple NHRA member tracks within each region across the country, we are excited about the possibilities for a future NHRA national event.”

And on a second Capital Sports Report Facebook Live show last week, the sport’s most successful driver ever, Funny Car owner-driver John Force, said, “We’re going to get Tulsa. I think it’s comin’. And there’s a couple other tracks they’ve been talking to that we need to go to.”

That confirms that the NHRA isn’t rethinking its opportunities and putting a positive twist on what appeared to be glum news.