A month after Pomona’s season opener, the "stocker" world was rocked by GM's reinvigorated support for the Automobile Manufacturers Association (AMA) racing ban that its Pontiac division, in particular, had been circumventing with great success in NASCAR, USAC, NHRA, and land-speed racing for five years. Mid-1957, when more than 50 American automakers and suppliers pledged not to directly or indirectly sponsor or support auto racing, or even promote performance in advertisements, PMD's Bunkie Knudsen had secretly formed a back-door network of "skunkworks" operators. In particular, teams fielded by Mickey Thompson, Smokey Yunick, and Ray Nichels had been running wild with unofficial factory funding. While GM’s managers looked the other way, GM’s market share increased to more than half of all U.S. vehicle sales—attracting worrisome attention from the feds. Already weary from fending off antitrust regulators, GM’s top brass cut the cord to loyal shops and drivers. The much-smaller Chrysler Corporation and Ford Motor Company were both happy to have their picks of Pontiac and Chevrolet champions while stoking the factory-horsepower wars absent any competition from the world's largest automaker. Lightweight 426 Dodges and Plymouths and 427 Galaxies and Fairlanes instantly grabbed performance advantages that they would hold until late in the decade.

Publisher-editor Doris Herbert, arguably the sport's second-most-powerful individual in 1963 and most-influential female ever, played promoter for a series of Drag News Invitationals that introduced drag racing's four-day "weekend" this season (West Salem, Ohio). Previously, not even the AHRA and NHRA Nationals ran more than three days, weather permitting. At Famoso Drag Strip, the Smokers of Bakersfield conducted the first open-qualified, 64-car Top Fuel Eliminator. Art Malone won it, plus the AHRA Nationals and numerous high-dollar match races (not to mention qualifying for the Indy 500 in the Granatelli brothers' backup car, an eight-year-old Novi V8 roadster).

We cannot conclude this installment without honorably mentioning the year’s biggest exhibition attractions. As we saw in our previous episode, Art Arfons and Romeo Palamides, respectively, brought the jet age to drag racing during 1962. These pioneers commanded as much as $1000 each for as many days and nights of the week as their two-man teams could dash between tracks and bag the loot. NHRA's late-season decision to ban the beasts altogether from sanctioned strips only heightened curiosity and demand for three-round exhibitions against fuelers and each other. While no wheel-driven car could run within a second of a properly tuned weenie roaster, the local AA/FD hero was often allowed to "win" his second race, keeping fans buying beer and hot dogs in anticipation of a decisive third match almost always taken by the six-second jet.

The concept of lashing fighter-jet horsepower to nondriven wheels was pioneered by Nathan Ostich, a physician to Los Angeles racers and automotive journalists. One of the latter, Hot Rod's Roy Brock, was commissioned in 1957 to design and help build a Bonneville car around one of the engines entering civilian-resale channels. The duo did static testing in 1959 and hit the salt in 1960. Simultaneously, L.A. lakes and drag racer Craig Breedlove noticed another engine at a military-surplus store and quickly calculated that the same 500 bucks he'd budgeted to build another blown flathead for his '34 Ford could buy 10,000 horsepower, instead.

By 1963, a second generation of jet jockeys was hitting the road. Romeo's Oakland shop even offered turnkey packages. While up-front costs far exceeded those of assembling a conventional slingshot, the engine was virtually maintenance-free. That $25 block that the local nitro hero plucked from Grandma's wrecked New Yorker needed another grand to acquire the 1000-hp entry into Top Fuel, and might survive mere seconds. Buying and constantly replacing the latest M&H Racemasters or trick heads were no longer necessary. Theoretically, any dummy could learn to keep a jet alive and making money indefinitely.

The end of the season found fans of fuelers, gassers, stockers, and land-based aircraft in rare agreement that they’d all just experienced our sport's best year yet. Was 1963 also the greatest single season ever? Decide for yourself as the next episode of Drag Rags drives further into drag racing's golden age.

*Editor’s Note: Some original, duplicate issues of these & other 1963 weeklies & monthlies are offered by the Wallace Family Archives personal library. E-mail requests to [email protected]. 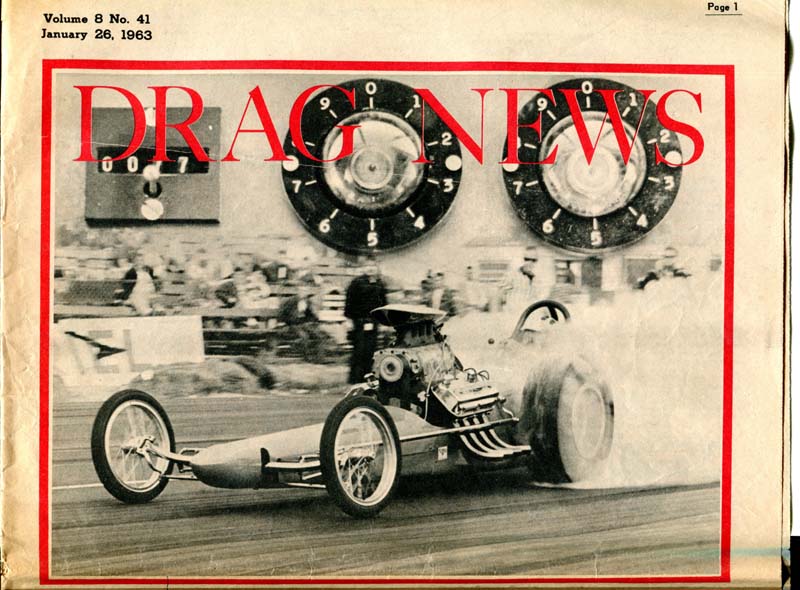 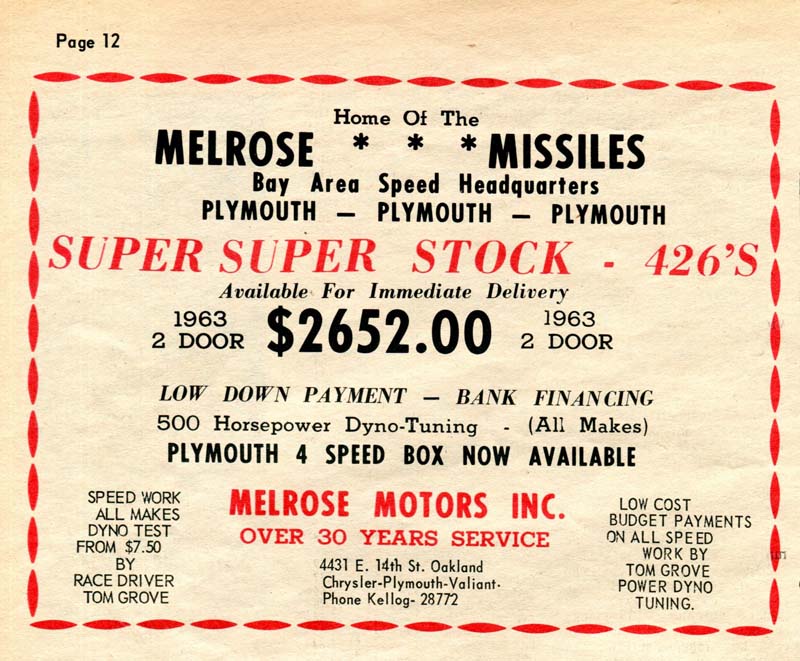 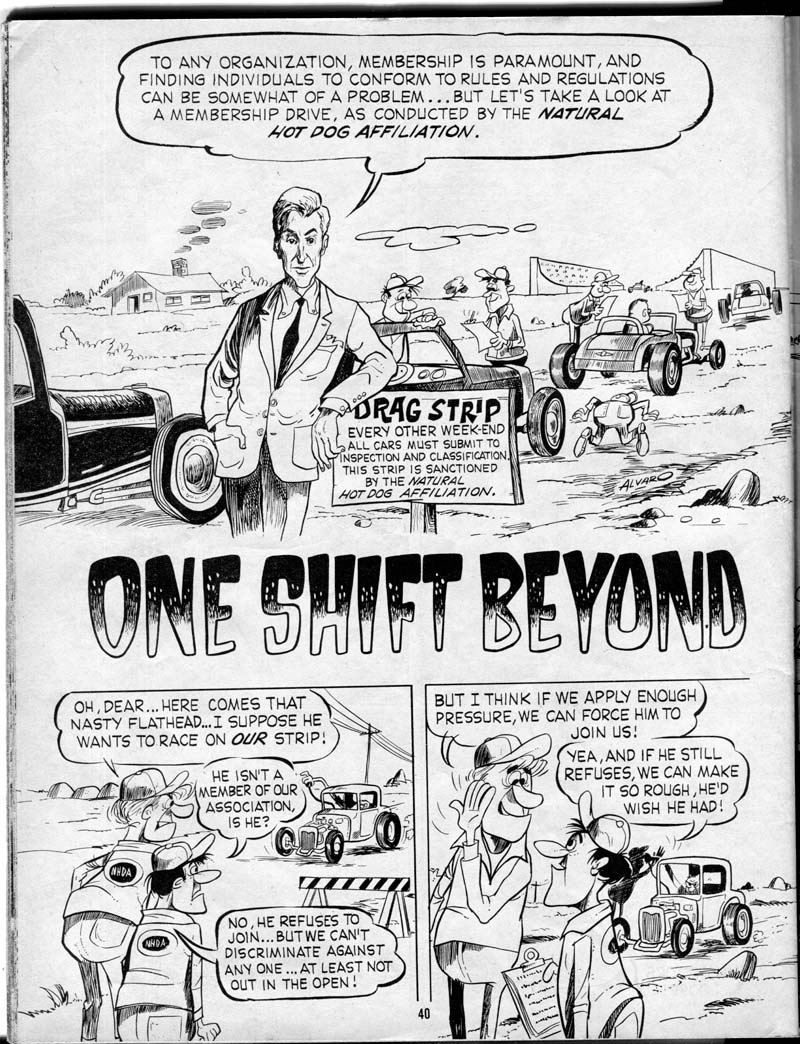 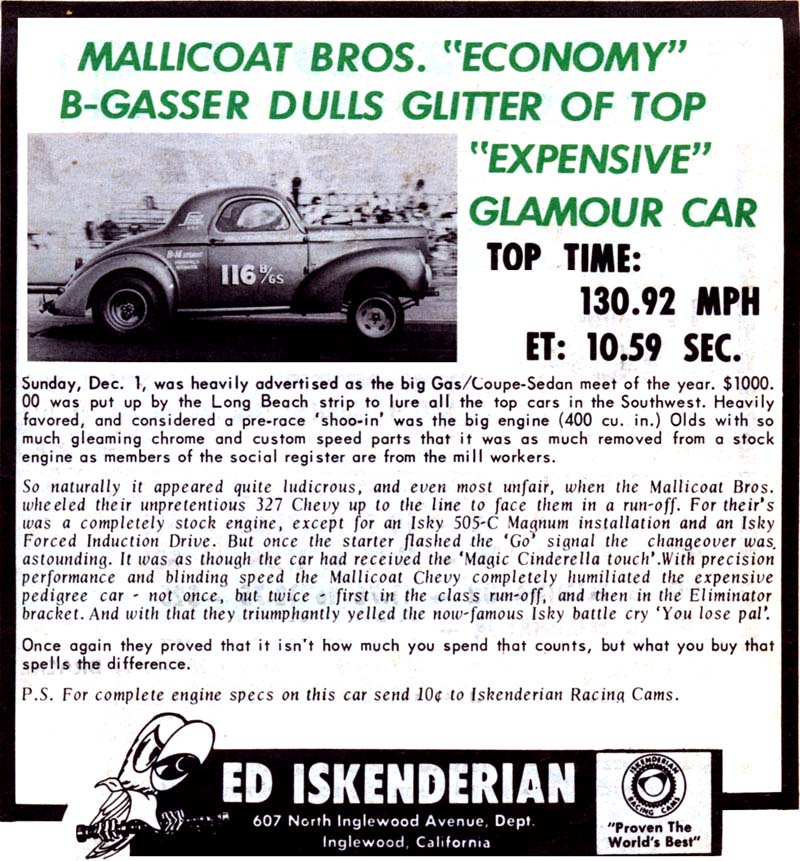 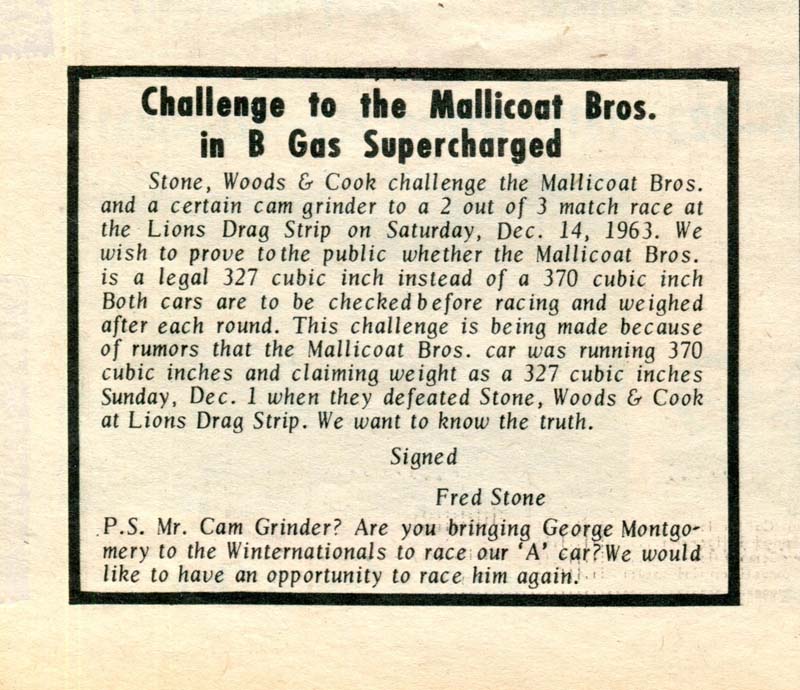