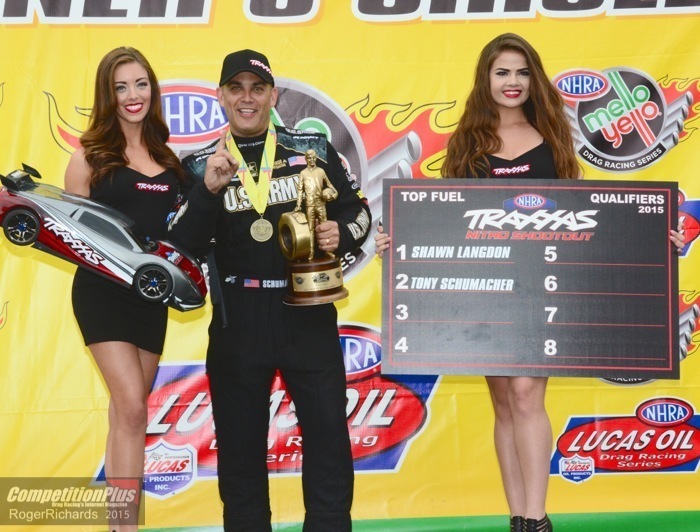 NHRA’s winningest Top Fuel driver, Tony Schumacher, couldn’t resist bringing up the subject in the media center at Wild Horse Motorsports Park. The eight-time champion, and driver of the 10,000 horsepower US Army Top Fuel'er wanted to weigh on the recent debate on whether NHRA was justified in sending letters to its members warning their participation in the Discovery Channel’s Street Outlaws could result in a suspension of their competition license.

“I think it’s funny there’s an argument of any way shape or form,” said Schumacher. “If people read between the lines, we all want the same thing. NHRA was founded by Wally Parks to keep drag racing off of the streets. He wanted to make it safe for people. What are we trying to tell our kids here? Go out there and race on the streets and have a chance of getting killed? Or, wiping out a family? Or, a mom in a minivan and her family because she happened to pull into the path of a pair of cars street racing?”

NHRA’s winningest Top Fuel driver, Tony Schumacher, couldn’t resist bringing up the subject in the media center at Wild Horse Motorsports Park. The eight-time champion, and driver of the 10,000 horsepower US Army Top Fuel'er wanted to weigh on the recent debate on whether NHRA was justified in sending letters to its members warning their participation in the Discovery Channel’s Street Outlaws could result in a suspension of their competition license.

“I think it’s funny there’s an argument of any way shape or form,” said Schumacher. “If people read between the lines, we all want the same thing. NHRA was founded by Wally Parks to keep drag racing off of the streets. He wanted to make it safe for people. What are we trying to tell our kids here? Go out there and race on the streets and have a chance of getting killed? Or, wiping out a family? Or, a mom in a minivan and her family because she happened to pull into the path of a pair of cars street racing?”

But before Schumacher is branded as a hater, he wants the point made clear. He loves the show and is a regular viewer.

“The show is a good show,” Schumacher said. “Let’s face it, you turn it on and it’s a really cool show. Anytime you have a car that starts up and makes a loud noise, I am going to watch. It doesn’t mean I support what they are doing. I support the show because I support any kind of a show with racing in it. I love racing.”

Pro Stock racer Larry Morgan who has a reputation for being very vocal in criticizing the NHRA, doesn’t mince words when pointing out the Glendora, Ca.-based sanctioning body made the right move. In the interest of full disclosure, Morgan admitted he raced on the streets before he began racing at the drag strip. 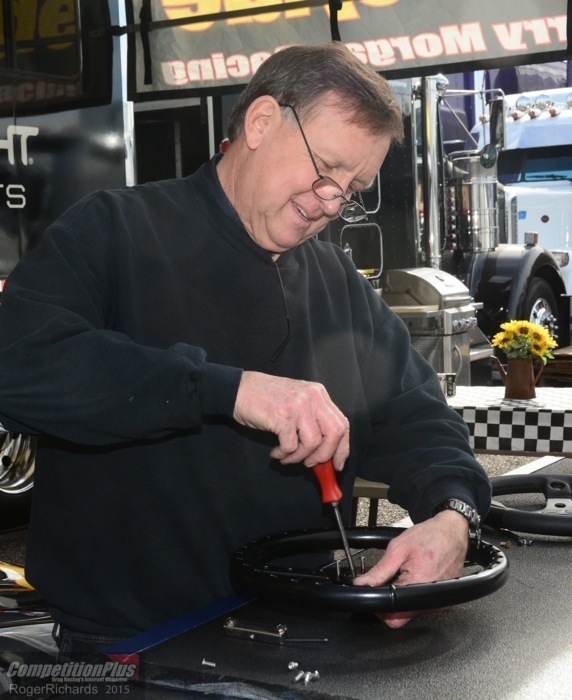 Larry Morgan has been known to take the NHRA to the woodshed over issues but has nothing but praise for how they handled the Street Outlaws situation. “I thought the NHRA handled the deal properly,” said Morgan. “The thing I look at is the amount of people on the streets and danger of the cars nowadays. Back in the day when I was doing a little bit of street racing, which I am not proud of today because I drag race for a living, there weren’t as many people on the road and the cars didn’t go as fast. Now, there are cars out there as fast as my Pro Stocker. They are dangerous on the street.”

Even though the Street Outlaws show is largely staged on cordoned off streets, and reportedly done with the cooperation of local law enforcement, the danger still remains. Troy Critchley, a former NHRA Pro Modified racer, with the encouragement of local town officials in Selmer, Tenn., performed a burnout on a city street and lost control plowing into a crowd of spectators, killing six people and injuring another 18.

Though the NHRA was not involved in the exhibition, they were named in numerous lawsuits because they car driven by Critchley carried series decals, a competition number and safety certification sticker. Because these were present, they became fair game in litigation. The cases were all dismissed.

An overwhelming number of NHRA’s professional drag racers are admitted thrill-seekers, and the temptation can be a challenge to decline. Erica Enders-Stevens, Pro Stock series champion, said being in an automotive world away from the race track can present temptations to go race.

Enders-Stevens credits her upbringing in a racing family, and her Junior Dragster past, as reasons why she has turned down many offers to “take it to the street.”

“I’d say so because I grew up at the drag strip with my dad,” said Enders-Stevens. “We built high performance street rods and cars in our garage, but we took it to the strip to test it out. That’s something my dad taught me and my sister and I will teach it to my kids as well.

“It’s a fine line to walk and a sticky situation to comment on. But when you go back to why Wally Parks founded the NHRA was to get racing off of the streets. Growing up around hot rods, I was around that scene quite a bit in high school. When I went real drag racing, doing it the right way was what was most important to me.”

Many of the racers with whom CompetitionPlus.com spoke with regarding the situation said whether or not the show is authentic street racing, it sends a negative message. And, they add, it’s a message which glorifies the thrill of racing illegally. 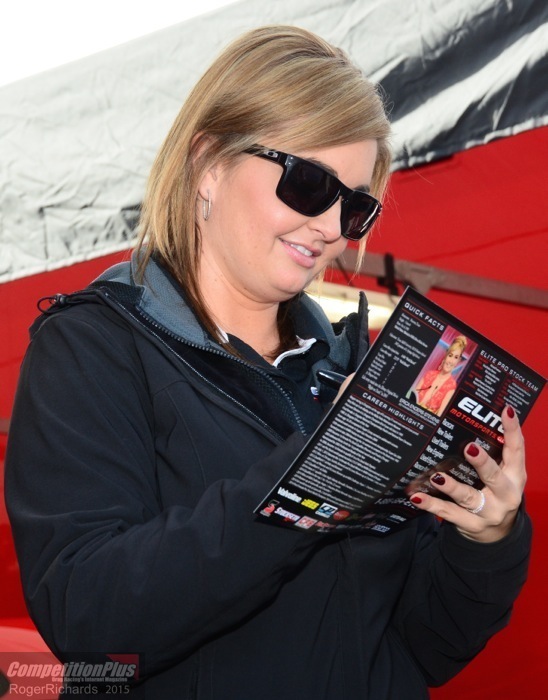 Erica Enders-Stevens credits her childhood in growing up at the track and racing Junior Dragsters provided enough influence to turn down lucrative street racing opportunities. The illegal street racing is no urban legend. The Reuters News Agency reported an out-of-control car in an illegal street race struck and killed two spectators and badly wounded a third person in Los Angeles early on Thursday morning.

To fully understand the largest difference between illegal street racing and one done at a drag race, one must have a high speed accident.

“There’s a helicopter at the finish line. I’ve used it,” Tony Schumacher. “There are paramedics. I’ve used them too. We are out here doing what we love and we respect what you [Street Outlaws] are doing. All we are trying to say is when you are promoting racing on the street, where there are no paramedics is not reality. That’s not what we want. If you guys are off doing the show on a side street, blocked off like some people understand it is, we know it is a different scenario. But what do the kids at home think? Do you they think they should get their Chevelle out on the side street and run through someone’s backyard? Be careful of what you’re promoting.”

“Having crashed a car at 200 miles per hour, in a controlled environment with Life Flight and an ambulance, and Safety Safari, made me rethink the way I drove in everyday transportation on the street,” Enders-Stevens said. “It’s just crazy to put yourself in a situation where you don’t have those resources readily available.”

Morgan believes there could be a compromise of some sort. If it’s the unpredictable nature of high horsepower cars, then move to an area where speed is supposed to be kind. If they want a slick track, then don’t prep it, Morgan says. Whatever the Street Outlaws needs to replicate the street, Morgan believes they should do it on a strip.

“Drag racing should be done on the drag strip. There’s plenty of drag strips around,” Morgan said. “To be honest, if [Street Outlaws] would want to put a program together any track operator would love to have that. I think they are wrong for not doing it at an NHRA or IHRA participating track.”

Antron Brown understands and agrees with why the NHRA took the course of action they did, but would have liked the two worlds to come together more, rather than in a standoff with a line drawn in the sand.

“I have a lot of respect for anyone who wants to race and be the first to the finish line,” said Brown. “We’re contenders and that’s what we love to do. I think it would have been cool to see NHRA invite [the cast of Street Outlaws] to our events. Maybe on a Saturday, and do an exhibition. At the end of the day, the Street Outlaws guys are racers too. They love racing. 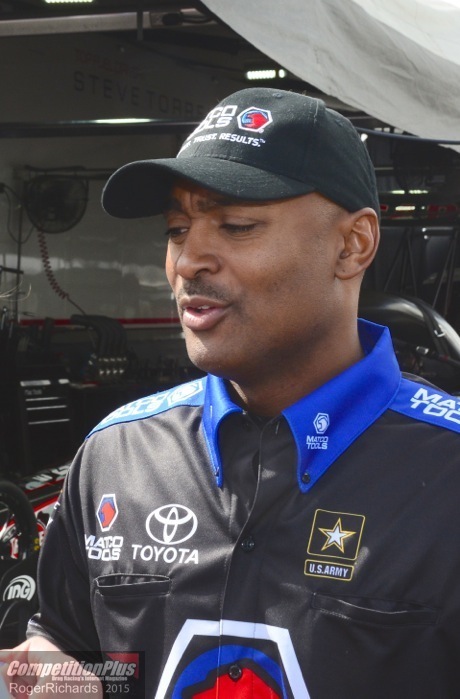 Antron Brown would have liked to have seen more interaction with the Street Outlaws show and the NHRA, if only to have had the shows staged at the track after hours on Saturday night.“We all know for sure that their racing is closed off anyway. It’s a made for television situation. They block the roadways so they can be safe. But, in this instance there are no guardwalls and telephone poles to hit, or a ditch. With that being said, I think we could have been more proactive to get them to the place where they need to be racing at - our NHRA national events.”

“They could see firsthand, and maybe let them race on Saturday night, after we are done, and do it on a track not prepped like it is in the day. There are always different ways to do this. We just need to pull them in the right direction. The direction is over here with us and having fun.”

Schumacher regularly speaks to teenagers, many of whom are seeking a direction in life, and time and time again, his message conveys – make sound decisions.

“What I would like to convey to those guys and the NHRA people fighting this fight, you have an obligation if you are wearing the NHRA on your sleeve to lead kids to safer places to race,” Schumacher said. “It’s your obligation. It’s why we do what we do. It’s what we are doing and certainly what Wally Parks spent money to establish.”

And leading impressionable youth in the right direction is what matters more to Enders-Stevens than win-lights.

“I have a responsibility as a role model for how to do this sport properly,” Enders-Stevens said. “We have to be careful in what we do and what we say, and what we wear, it’s important to me to walk that fine line.”

The fine line, she adds, which starts and stops on the drag strip.