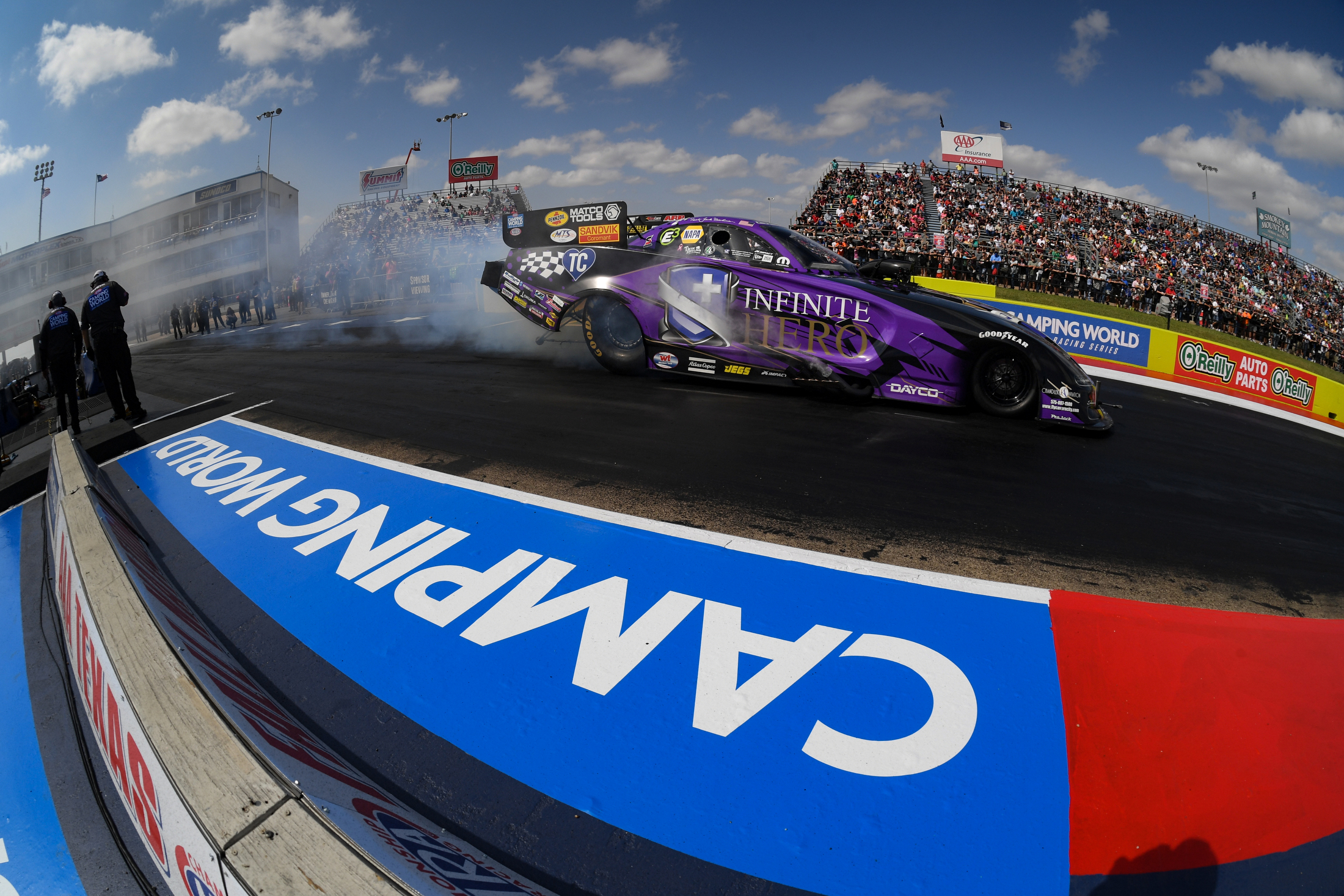 This has been a bittersweet season in the NHRA Camping World Drag Racing Series for veteran nitro Funny Car driver Jack Beckman.

Beckman has been a world championship contender from race one in this COVID-19 marred season. 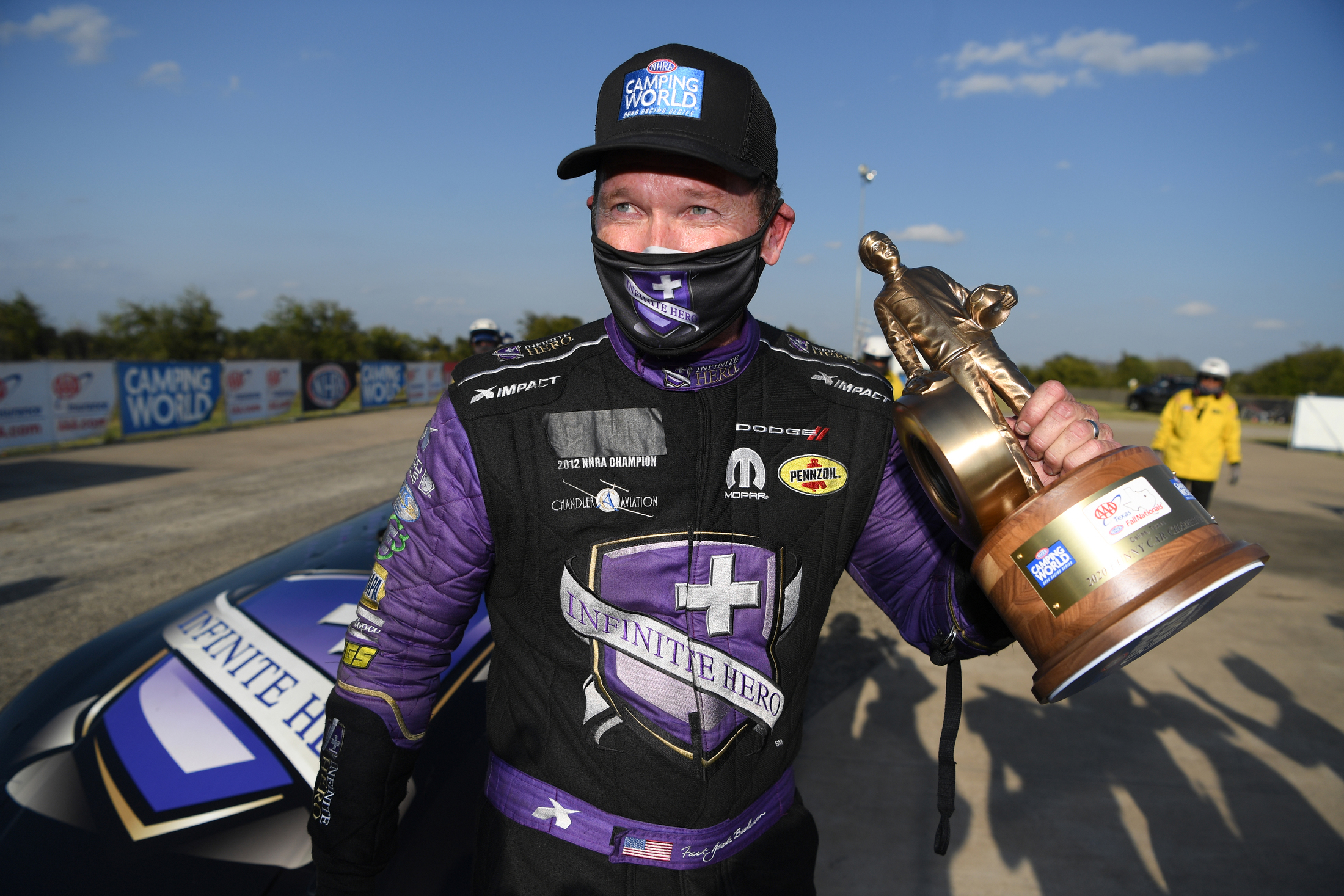 However, the third week of August, Don Schumacher Racing announced the Chandler Family "Giving Car Program" was coming to an end at the close of the 2020 season, leaving Beckman and fellow nitro Funny Car driver Tommy Johnson Jr. without sponsorship in 2021.

Despite the adversity of the season, Beckman and his team have kept moving forward with an eye on a championship.

“He's probably had my number more than I've got his number and we have a phenomenal car,” said Beckman of Hagan, who had a 28-24 record against Beckman before Sunday. “But the thing is you're always aware of all the small issues in your pit. You're not aware of the ones that are going on three doors down. We went to warm this thing up for the final and it backfired, and we didn't know if we hurt the motor. The idle was suddenly down and we’re like, ‘we're out of time.’ We just had to do our regular service and drag it up to the starting line.

“Boy, you want to talk about feeling two inches tall because I thought maybe I did something that caused us an anomaly and just cost us this race. I had a good feeling all day today and I wish I could put my finger on it, and I wish it came in a pill form because I take it before every single race. After that happened for the warm-up I thought, ‘wow this might be the way that we lose this thing.’ So you got to try to compartmentalize all that stuff and put it off to the side and then you look over in the other lane and there's the No. 1 qualifier in a car that hasn't stumbled at all today, but you know what, we're right there too. We're not giving away anything to anybody right now. I mean, I think our cars as good as any car out here every time we drag it up there. Doesn't matter if it's cool or hot out there.”

Beckman, who won his lone nitro Funny Car title in 2012, won his third race of the year in five final round appearances.

This was Beckman’s 33rd nitro Funny Car win of his career and first in Dallas.

“No, getting up in the morning sucks for me as it has for 54 years,” Beckman said. “No, when I got here and we did the pre-race deal where we rode up in the trucks I thought, ‘you know what?’ I think it comes from not forcing things. This might be my last race at Dallas. This might be my last year driving a nitro car. Don't know. I'm not going to stop looking for funding but most people don't retire because they're ready to retire, they run out of money and stop driving the cars and I'm going to go back to fixing elevators the week after we run at Vegas.

"I will continue to look for sponsorships, but I have to have a paycheck for my family. I got a mortgage and two little kids. So, this might be my last go-round. I never in my wildest dreams thought it'd be 33 funny car trophies and counting and Dallas was the one. I won Indy, I won Pomona, I won a lot of the other majors but Dallas. Since I came here in 1986 to spectate at the first national event here when I came on the pro tour, I just thought, ‘God I’d love to win at Dallas.’ I had 14 shots at it before I finally closed the deal.”

This was DSR’s 12th consecutive Funny Car victory win dating back to the 2019 Dallas event win by Hagan.

Each of DSR’s four Funny Car pilots have contributed at least two Wally trophies to the string of 11 wins. DSR previously set the consecutive win record in a single class at 10 races during the 2017 season with the same driver lineup of Beckman, Hagan, Johnson Jr., and Capps.

Beckman, a drag racing historian, also understood what it meant to be the first nitro Funny Car winner with the NHRA known as the Camping World Series.

“It's huge. I think I won the inaugural at Charlotte and that's it. John Force was always phenomenal at gobbling up those firsts, the shootouts, the inaugural races. But if you look at the percentage of races, he won that's not a shock to you. So, to have your name listed as the first to do anything, that can never be taken away from you. That's awesome.

“There's two things that I am worried about. One is my career and what I'm going to continue to do for income and the other is the future of the sport. I love this sport dearly and fortunately that one with the Fox extension with Camping World coming on board, once we get through all this COVID mess, it looks like the future for NHRA is going to be very bright and I love that and I would love to continue to be involved in that. I'll keep trying.”