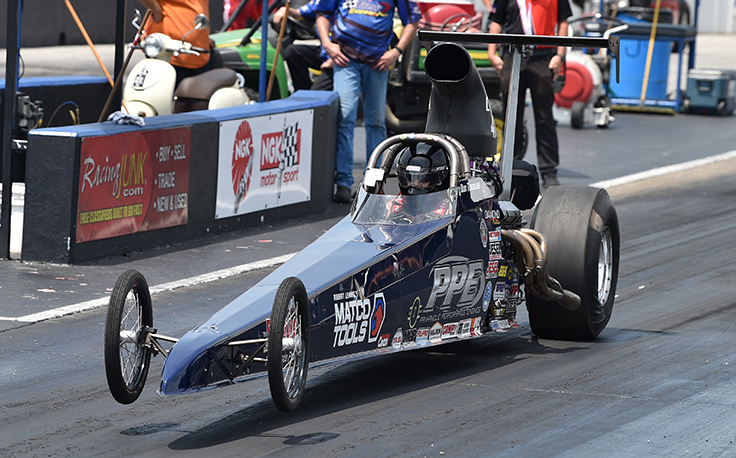 While everyone would love to be in the top spot in the Comp Eliminator Bonus Fund, started by Rodger Brogdon and Rooftec, that’s not the only position that pays. In fact, anyone in the Top Ten in this heated points race will walk away with a nice chunk of change.

Just ask Don Thomas, who, after winning the final Division 4 points meet of the season, is sitting fifth in the points race. His goal was to stay in the top ten, so he was thrilled to walk away with the NHRA Lucas Oil Drag Racing Series Wally in Tulsa.

“I’ve been fighting to stay in the top ten,” said Thomas. “It’s pretty jammed up down there (in the bottom half of the points standings). One or two rounds can make a big difference. So that win gave me some separation to where I think I can stay at least in the top ten. It’s $10,000 to finish tenth. That’s a nice shot in the arm in the winter.”

Indeed it is. Competition Eliminator has seen some fierce matchups this season thanks in part to increased car counts. One can only speculate, but it seems that Brogdon’s Comp Eliminator Bonus Fund is doing exactly what it was intended to do, bring out more cars and intensify the competition. Thomas agrees wholeheartedly.

“I don’t think there would have been more than 10 cars in Tulsa if it wasn’t for the Comp Eliminator Bonus Fund. I would venture to say it’s at least doubled the car count at every race we’ve been to, at minimum. There are a lot of cars that have made the commitment. I would hope that people in other divisions would take notice and try to do something along the same lines. It’s made the competition tough. My goodness, look at the races we’re at and there are 20 or 30 cars and they are all good cars. There’s no easy first round anymore.”

It was a family affair for the Thomas clan in Tulsa. Don’s wife, Kim, and two sons Jackson (11) and Mason (9), made up the crew for the weekend, making the atmosphere in their pit one of fun and levity.

“That’s the best part, honestly,” said Thomas. “It’s been a while since I’ve won with them there. So it was nice to have everybody there and get to take pictures with the family. My wife’s gotten to the point where she tows me up and tows me back and helps with scales and fuel checks and those things. It makes her part of it, and I can tell that it’s a lot more fun for her to go racing that way. My sons are getting to the point where they can help more. It’s neat to watch them figure things out and really be a part of it.”

Tulsa has been good to Thomas. This was his third win at the facility. However, the weather on this particular weekend proved to be especially challenging.

“It was hot and miserable. It was so slow I just couldn’t believe how bad it was. There were so many good cars there that couldn’t go 45 under. We were all just working our tails off to go 45 under. It’s always hot but this year it was just so slow.”

Thomas had to get around Clint Neff, Taylor Chomiski and Brogdon before getting a bye-run into the finals where he faced Adam Hickey, who’s been a powerful force all season long. Thomas’ C/DA got the advantage on the starting line and he managed to hold on to that lead for the win.

For Thomas, attitude is everything when it comes to succeeding in Comp Eliminator. He’s quick to note what a positive impact the Comp Eliminator Bonus Fund has had on the category as a whole.

“For so long it was all doom and gloom. Everyone just kept saying how Comp was dying. And this is something really positive for the category. It’s hard work. It’s not easy to run Comp. It deters anybody who doesn’t have the right attitude about it. I applaud anybody who will race at all, and especially run Comp and work hard enough to get their stuff fast to where they’re competitive. If money was stopping you, this fund pays out big, so why are you still at home?”

Thomas is also quick to note that in addition to his family, his win wouldn’t have been possible without the help of many others.

“There’s a lot of people responsible for my win,” said Thomas. “My wife, Kim, and my sons, Parker, Jackson and Mason. My guys at the shop who work while I’m racing, Jerry, Landon, Jerad, Jon, my dad (Wayne), Brent, and Jack, they’re all back here working while I’m out racing. I also need to thank Rhett Fulton, who built the car, as well as Gordon Holloway, Bob Book, Jason Coan, Matco Tools, Refine Energy Services, Todd Pullen and CFE.”

This was Thomas’ seventh divisional win. He also has three national wins in his career.

In addition to Brogdon's company, RoofTec, here are the other sponsors of the Comp Eliminator Bonus Fund: