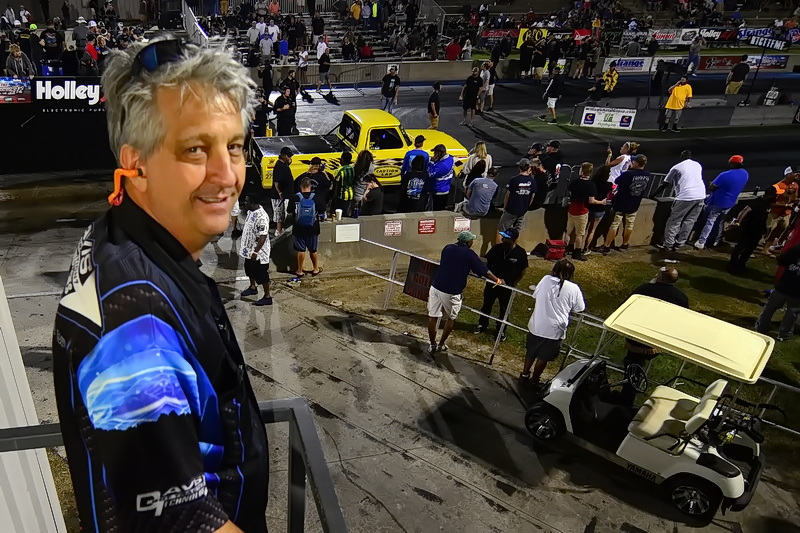 "I'm not saying everybody running fast is running traction control or wheel-speed management or something like that--but they probably are."

So says the man who would know, Shannon Davis of Davis Technologies, a pioneer in traction control systems who attends literally dozens of drag racing events each year. Part engineer, part teacher, some might even say part wizard, Davis is the go-to-guy for many of drag radial's finest tuning minds when they need traction-related advice or solutions.

Davis Technologies received its first traction-control-related patent in 1999, just two years after Davis established the business in Asheville, NC. At least a dozen more patents have followed in the years since.

"It has certainly changed a lot. Our first systems were basic acceleration systems. They monitored the driveshaft for sudden changes in rate of acceleration and made the assumption that physics didn't change, the car still weighs the same, gravity probably didn't change, we're not suddenly racing down a big hill. So why can it suddenly accelerate twice as fast? Because it broke traction," Davis explains.

"So it was a pretty fair assumption of what was going on and we pulled timing, but what's changed? Well, just like your iPhone 12 over your iPhone 5, it's gotten faster, smoother, and better at everything it does."

The business has changed alongside the product, too. Essentially started as a one-man shop, Davis Technologies expanded several years ago to allow its founder to continue his nomadic problem solving.

"As the chips got faster and more available to small companies like us, we changed our methods," Davis says. "It's nice to be able to hand things over to someone, so when I'm here at the track I've got engineers that are better at math than I am and better at programming than I am. I still come up with a lot of the general concepts and then they make them work really well.

"But for this kind of business it's kind of key that you need somebody at the track who's working right with the racers, understands the product and what it needs, as well as what they need it to do. For example, just yesterday we had a customer who had a unique issue where in this particular situation we needed to put something in two gears at one time--but only during the burnout. So that wasn't a parameter they could set up.

"So I called the shop, told them the issue, and an hour later, while I'm busy here with five other cars, they call me and say, 'Okay, we've got some code ready for you to try.' And it worked! And I'm not at the track here ignoring other customers while trying to write custom code."

With so many competing customers, though, it means Davis has to walk a fine line of discretion considering his access to sensitive data.

"There's nothing like hands on, but we don't run a house car. And frankly, I never would, because if you're focused on it, you're not focused on your customers is my belief," Davis states.

"But when I'm at the track I'm usually hands on with 10 to 20 people on any weekend. So I see what a lot of high-level crew chiefs are doing, as well as what your B and C teams are doing. And although you can't share any of that, you can look and see how it all adds up, adds up to your knowledge. It lets us understand better about what the product needs to do.

That access and trust also aids development of new ideas, concepts and products. Davis describes attending a race where legendary Texas doorslammer racer and longtime Davis Technologies client Frankie "Mad Man" Taylor was serving as crew chief. He had a Holley engineer tagging along that day when they visited Taylor's pit.

"I said to him, 'Hey, Frankie, I've got some new stuff I want to put in the car. Do you mind if I try it?' He said, 'Sure, go ahead,' and went back in his trailer. He didn't ask what it was, what it did, what it might cost, he just said sure, go ahead," Davis recalls.

He remembers the Holley engineer being dumbfounded to the point of following Taylor and asking why he'd allow Davis to affect his tuneup without first knowing the details. The response covered it all.

"Because it always works," Taylor answered.

Still, for all the science and research and experience that Davis Technologies is based upon, its founder remains adamant about the "organic nature" of drag racing, too. Davis is a firm believer in the happy accidents that racers--and even he--stumbles upon from time to time.

"I mean, probably everybody reading this article has an experience like, 'We screwed up and left in second gear and it was the best 60-foot we've had ever!'" It probably means the gear ratios are wrong, Davis adds, but it's also a great learning moment, he stresses. Don't waste it.

"Learn from that mistake," he says. "Unless it was a total fluke--which does happen--go try that again. It probably means you got your ratios all wrong. But if your car just likes something better, just go with it. I've seen it work over and over again."