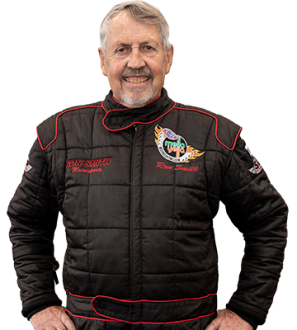 Now that Chris Karamesines has retired, one of his Top Fuel contemporaries gets the honor of the oldest competitor in the class.

Washington State’s Ron Smith, a retired Boeing employee, has an anniversary to celebrate. He earned his Top Fuel license in 1972, 50 years ago. But he has been drag racing longer than that. He said, “I have been out here, I think 60 years.”

The Northwest Nationals is the only race Smith attends these days.

“Well, we only race once a year, but I finally got a Funny Car, a nostalgia one, so I'll be driving that during the year, but only one time for the Top Fuel car,” he said.

However, he does have one vivid memory down in Arizona: “I remember we outqualified Kenny Bernstein in Phoenix, and when they left, [Bernstein’s crew chief] Lee Beard gave us a dirty look."

Even so, Smith said, “I'm trying not to look back or forward. I'm just trying to take things as they go, as they come and go.”

Through the years, his cars have come and gone. His crew chief, Gus Foster, used to campaign the “Foster Brothers Funny Car” in the early 1970s with brother Glenn, who worked for Connie Kalitta and Shirley Muldowney.

Then in 1974, Smith drove and Foster wrenched on Smith’s first Top Fuel car that he said “we built ourselves. Then I had Gaines Markley’s car. Then I think the next one we had was from Sacramento, [from] Gary Ormsby. Then I had two of Alan Johnson's cars.”

He had one of Gary Scelzi’s Winston Dragsters and before that a Blaine Johnson dragster.

The car has Smith’s own livery on it now and hangs from the rafters in his garage at Kapowsin, Wash., a community in the shadow of Mount Rainier.

What he’s racing now is a Brad Hadman-built car that used to be among the inventory for Clay Millican.