SAMPEY WINS NO. 44 ON A DAY FILLED WITH EMOTION 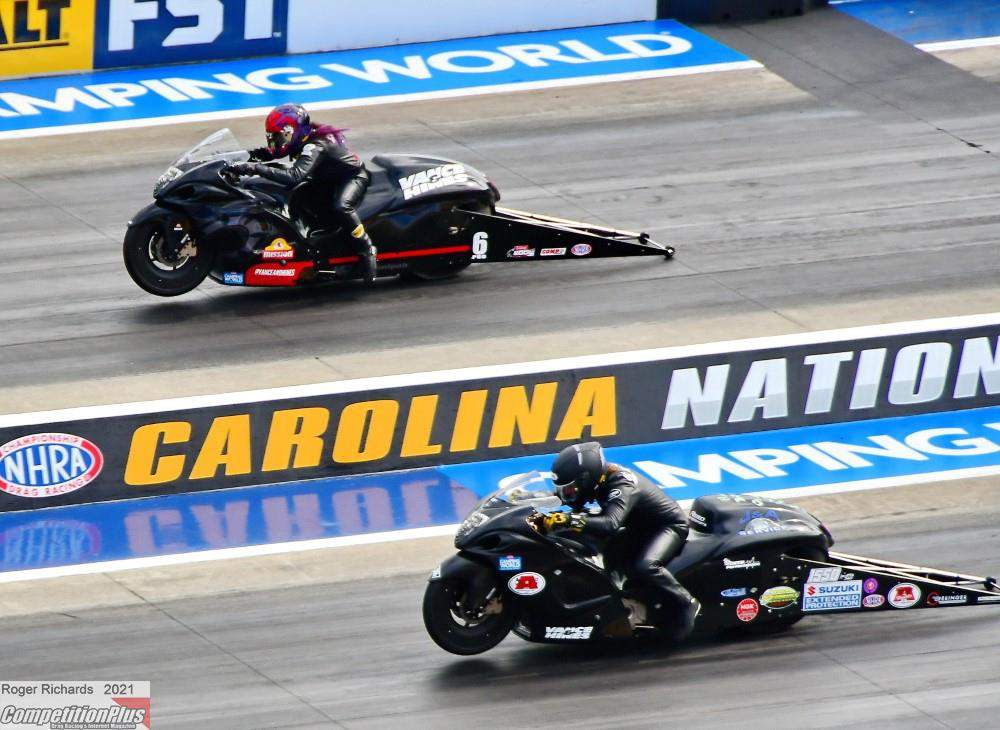 It was as if she was a reluctant winner. 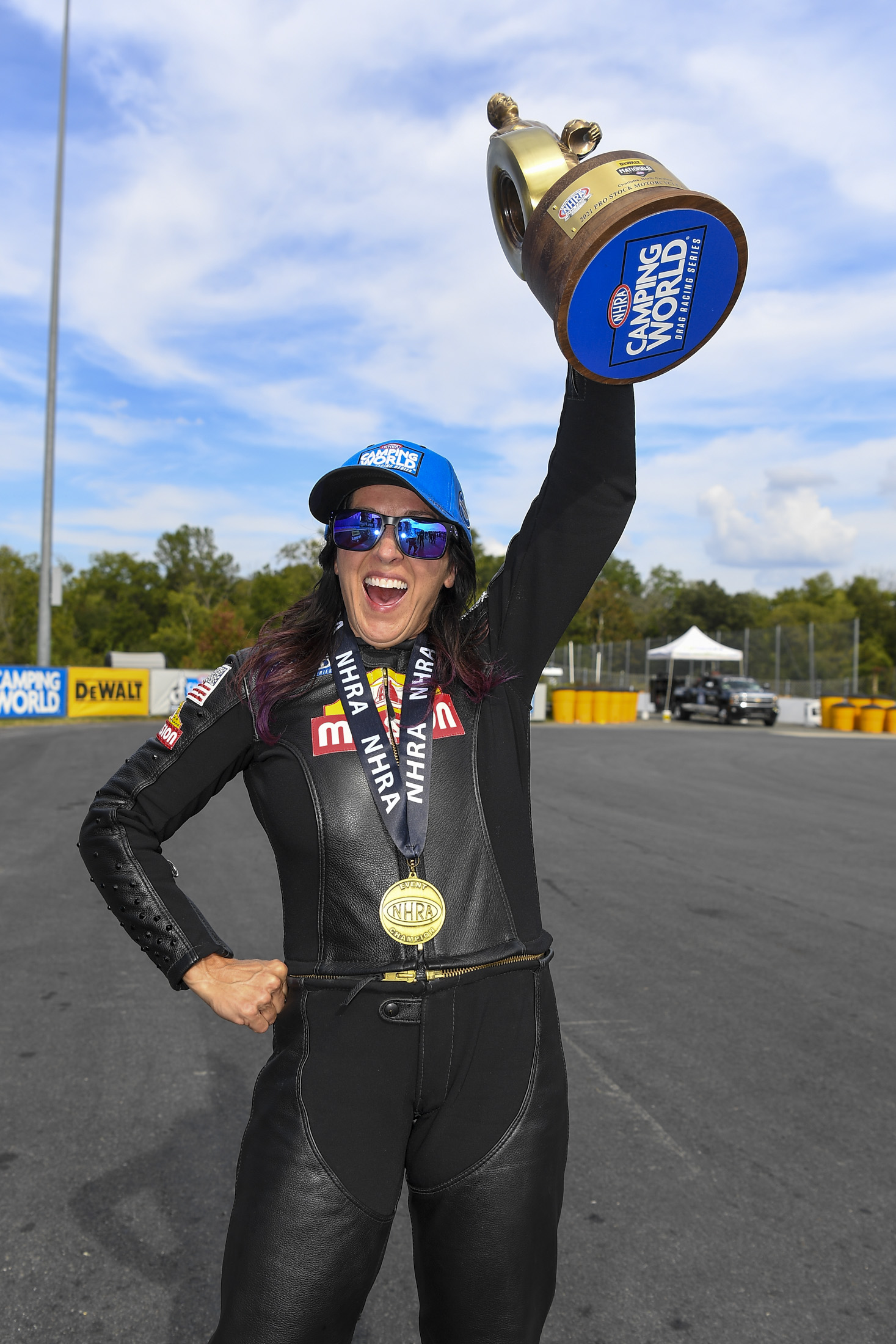 But that's how iconic Pro Stock Motorcycle rider Angelle Sampey came across as she opened the press conference in the zMax Dragway media center following her 44th career victory at the DeWalt Tools NHRA Carolina Nationals.

Almost 30 minutes earlier, Sampey dismounted her potent four-valve Suzuki and made a beeline for Joey Gladstone, the rider she had just beaten in the final round. Gladstone had had a tough day on the track after his teammate and mutual friend with Sampey, Cory Reed, crashed in their quarter-final match and was transported to a local hospital with serious injuries.

In the shutdown area, the two just embraced.

"I felt total guilt," Sampey said after beating Gladstone when his bike's safety shutoff rendered the machine powerless. "I felt so bad for him because of what happened to Cory and Joey's been in the final twice, and I think I've taken it away from him before. I want to see Joey and I really want to see Cory win a race. I love Cory. He was my teammate, and we were very close, and I felt guilt.

"I felt guilt because I had a horrible light and I felt like I didn't deserve it. So sorry. So I just kept telling him I was sorry. I'm sorry, because I hate to be the one who takes it away from someone. That's why I wish people were more happy for everybody that wins because we all want to win it so bad and I hate to be the one who stopped somebody else from doing it, but I want to do it just as much."

The happiest person for Sampey was Mother Fate, who apparently felt she owed her a "day."

To take inventory, in the last few weeks, the Louisiana-based Sampey has overcome Hurricane Ida, watched a close friend seriously injured in a crash, and has just been on the losing end of bad racer luck Sunday.

Sampey questioned momentarily whether she wanted to continue in competition after watching Reed take his spill in the second round.

"I almost wanted to say, 'I don't want to do this anymore today," Sampey said. "You start thinking about what you're risking out there. I know Cory knows it now. He's a father himself and I'm a mother of two girls. I weigh my risks. I know I have a safe motorcycle. I have an awesome team. We have a safe racing surface. We have an awesome Safety Safari that takes care of us, but I do know the risks.

"It took some mental preparation on the starting line to get over what I had just witnessed with Cory and build up the guts to get down the track and do it. So I had to put my faith in God and my faith in my team, and we made it, but it doesn't leave your mind. The next round in the final was just as scary, but we made it for that one, too. And so I definitely want to say, God is good and he kept me safe today. Thanks for that."

Call it divine intervention; call it what you want. But on Sunday, Sampey likely could have beaten Steve Torrence's dragster. Any given Sunday doesn't only apply to football.

"We always say, 'When it's your day, it's your day at the NHRA," Sampey said. "It takes literally every single thing to go in your favor. And one little bitty thing doesn't go in your favor, and you're done for. Joey's kill switch actually came off. So it cut the engine off and I was gaining on him, but I don't think I would've caught him had that not happened.

"So it was definitely, it was my day. I was thinking that the last two races, "This is my day. This is my day." And then when it doesn't happen and you lose, you're devastated and it's so hard to get to the final round. And it's so almost impossible to win a race these days that you start to think, "Why am I putting myself through this anymore?"

No. 1 qualifier Steve Johnson appeared to be a lock for a second consecutive victory, but like Reed in the previous round, he had his bike begin drifting to the right and hit the timing block, disqualifying him and negating an almost certain victory.

So what made the bikes a handful on more than one occasion? Sampey had her ideas.

"There is a bump at the tunnel in the left lane," Sampey explained. "He may have possibly broke loose on that bump and lost some traction. And then I think the wind was actually blowing a little bit at that time, that way. And then there's a crown in the race track. This one, as well as the last race, once you get over that crown, it starts sucking you towards the centerline.

"One of the things you cannot do, and I try to learn from everything, even from what happened with Cory, I learned something today. He was hanging off the left, he put his knee out, but if you step on the right peg while you're trying to push yourself off the left of the motorcycle, sometimes you're making it even worse. So if you're stepping on that right peg to push yourself over, it makes the bike go that much further. So that possibly could have been what went wrong.

"I remembered that every round after that. So when the bike was going to the centerline for me in the third round, I moved over to the right and I made sure I didn't touch that left peg at all. It came back pretty easy. Those are things that are sometimes hard to remember when everything's happening so fast going down the racetrack."

It's moments like Sunday afternoon's victory in the face of adversity, which inspire Sampey to keep moving forward.

"It would be easier just to go home and just be a mom, but I still have these goals in life," Sampey said. "One of them is to prove to my little girls that they can do anything they set their mind to, and I'm not done with that yet. I'm not done with winning. I hate to even say it. I don't want to talk about it, but the whole ... I'm looking for another championship and we're headed that way. I just have to keep my focus and one round at a time and hope things continue to go my way."