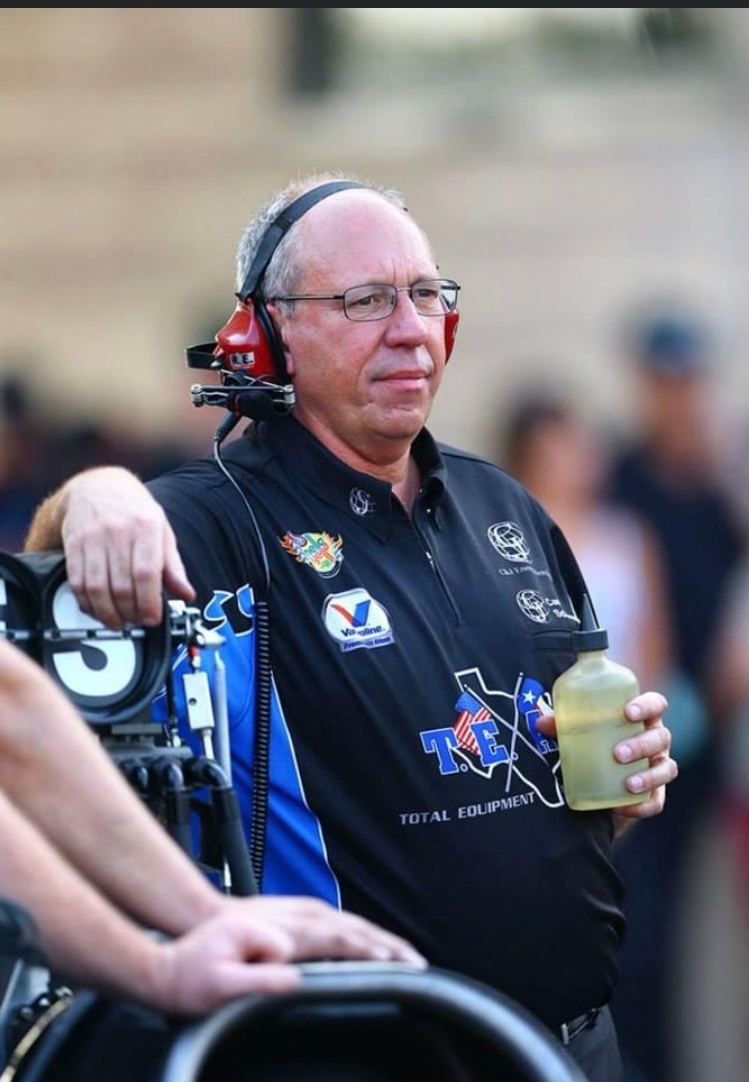 Buddy Hull announced Methanol Moonshine as his primary sponsor in December at the PRI Show and now the Dallas-based Top Fuel driver announced veteran Top Fuel tuner Mike Guger will take the reins as his full-time crew chief. Hull plans to race at least eight races in the 2023 NHRA Camping World Drag Racing Series. Hull’s first race this season will be the Arizona Nationals at Wild Horse Motorsports Park at the end of March.

“Adding someone like Mike Guger to the team is a dream come true,” said Hull. “He has so much experience and has worked with so many great drivers, I honestly pinched myself after he said yes to working with our team. We are building a solid foundation to move forward and Mike along with David Shaff, our car chief. They will be a great one-two punch. David joined our team over a year ago and has shown great leadership from the beginning as well as a great work ethic. I can’t wait to get to Phoenix and see what we can do.”

Guger, who learned the basics of drag racing under the tutelage of Hall of Famer Dale Armstrong, was crew chief first to Larry Dixon and then to Leah Pruett when they drove Top Fuel dragsters for Bob Vandergriff Jr. in 2015 and 2016.

“I am excited to get back to leading a Top Fuel team. I was really impressed with the parts Buddy has as well as his attitude and goals. I have known David for a while and he helped me with my Funny Car. He is a great worker and I am really comfortable with him. Buddy has given me free reign and I think we will work very well together. I have been trying to stay on top of the sport. I haven’t been hands on day to day but I will be honest, I make an effort every day to think about racing . I stay in touch with a lot of the current crew chiefs, and I think with Buddy’s inventory and his team we can have some fun and turn some heads.”

He began a lengthy association with Armstrong when he was just 13, eventually working his way into a position as Armstrong's crew facilitator when he and Hall of Famer Kenny Bernstein dominated the pro tour in Funny Car and later in Top Fuel.

“What I learned from Dale was just a work ethic,” Guger said, "how to conduct yourself; how to tune the car. I have been fortunate to work with great people throughout my career. I want to especially thank Robert Mills for giving me the flexibility to work with Buddy and his team."

In 2015, after securing his first crew chief assignment, Guger sent Dixon to the two No. 1 starts and six final round appearances.  Unfortunately, the duo never could close the deal and wound up fourth in the final Top Fuel point standings.

A year later, Guger won his first race as crew chief when Pruett beat Brittany Force in the final round at Phoenix.  A month-and-a-half later, though, after only four races, Vandergriff pulled the plug on his two-car team and Guger found himself once again without a full-time gig.

A resident of Austin, Texas, he has worked the past several years for Integrated Metal Products, Inc., while working to secure a license to drive a fuel Funny Car.

“I can’t thank Tim Wilkerson enough for all the support he has shown me since I started driving and also well before that,” said Hull. “I have known Tim all my life and his support and guidance has been so critical and helpful to me as a driver, team owner and a person. He is one of the greatest guys I know.”

Buddy Hull Racing and Methanol Moonshine will collaborate on a uniquely themed brand of merchandise available exclusively through Buddy’s website and other merchandise avenues. The team is currently talking with a variety of vendors for the 2023 season.

“Methanol Moonshine is an absolute perfect fit with our team and the look of the car is something special. I can’t wait to launch this partnership into a new gear through our racing program and hopefully make that trip ‘down under’ to race in a dragster there as well," added Hull.