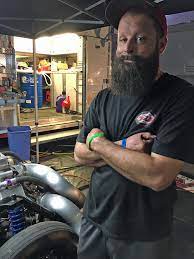 Lyle Barnett doesn't want the credit, although he deserves it.

On September 24, 2015, at South Georgia Motorsports Park, he experienced one of the worst fires in doorslammer drag racing history, leaving him with third-degree burns to his face, hands, and feet. He also ended up in a battle for his life.

As Barnett so eloquently puts it, a day earlier, he believed, "I was ten feet tall and bulletproof."

Barnett declines credit for the battle back to a new normal, citing the help of his faith and those around him, both family and medical personnel, who made his road to recovery possible.

In this video, Barnett talks about the struggle to regain his life and the presence of miracles along the way. He discusses the most challenging part of the healing process - the mental aspect and the fight to remain out of the "dark place." Barnett is candid about his desire to be alone and the dark thoughts that crept into his mindset.

Barnett's story is one of victory against the odds and how faith moved a mountain of adversity.