Two weeks after Dane Wood reached his first final round in Switzer Dynamics Pro Nitrous, the Professional Drag Racers Association (PDRA) racer scored a $15,000 victory at the second annual Summit Racing Equipment PDRA ProStars race Saturday night during Virginia Motorsports Park’s K95 Richmond Night of Fire. The Virginia native recorded a 3.797-second pass at 199.88 MPH in the final round to defeat Ed “The Iron Man” Burnley and his 4.077 at 145.19.

The PDRA also showcased its Jr. Dragster classes, with Nyck Shirkey (Coolshirt Systems Pro Jr. Dragster presented by PRP) and Hannah Sheppard (Classic Graphix Top Jr. Dragster presented by PRP) earning the ProStars victories. It was a meaningful win for Shirkey, who dedicated his win to friend and former PDRA announcer “Big Don” Ellison, who recently passed away following a hard-fought cancer battle. Shirkey gave up a slight starting line advantage to Chris Suppers in the final round, but he made up for it with a 7.904 over Suppers’ 7.915, both on a 7.90 index. Sheppard was first off of the line in her final-round match with McKenzee Hogan and recorded an 8.926 in her Church Road, Virgina-based entry to beat Hogan’s 8.929, both dialed 8.90.

Drivers earned the chance to race in the ProStars event at the last three races of 2021 and the first five races of 2022. There were no qualifying sessions, just a clocks-off shakedown run on Saturday morning before going into eliminations. All pairings were determined via a random chip draw. 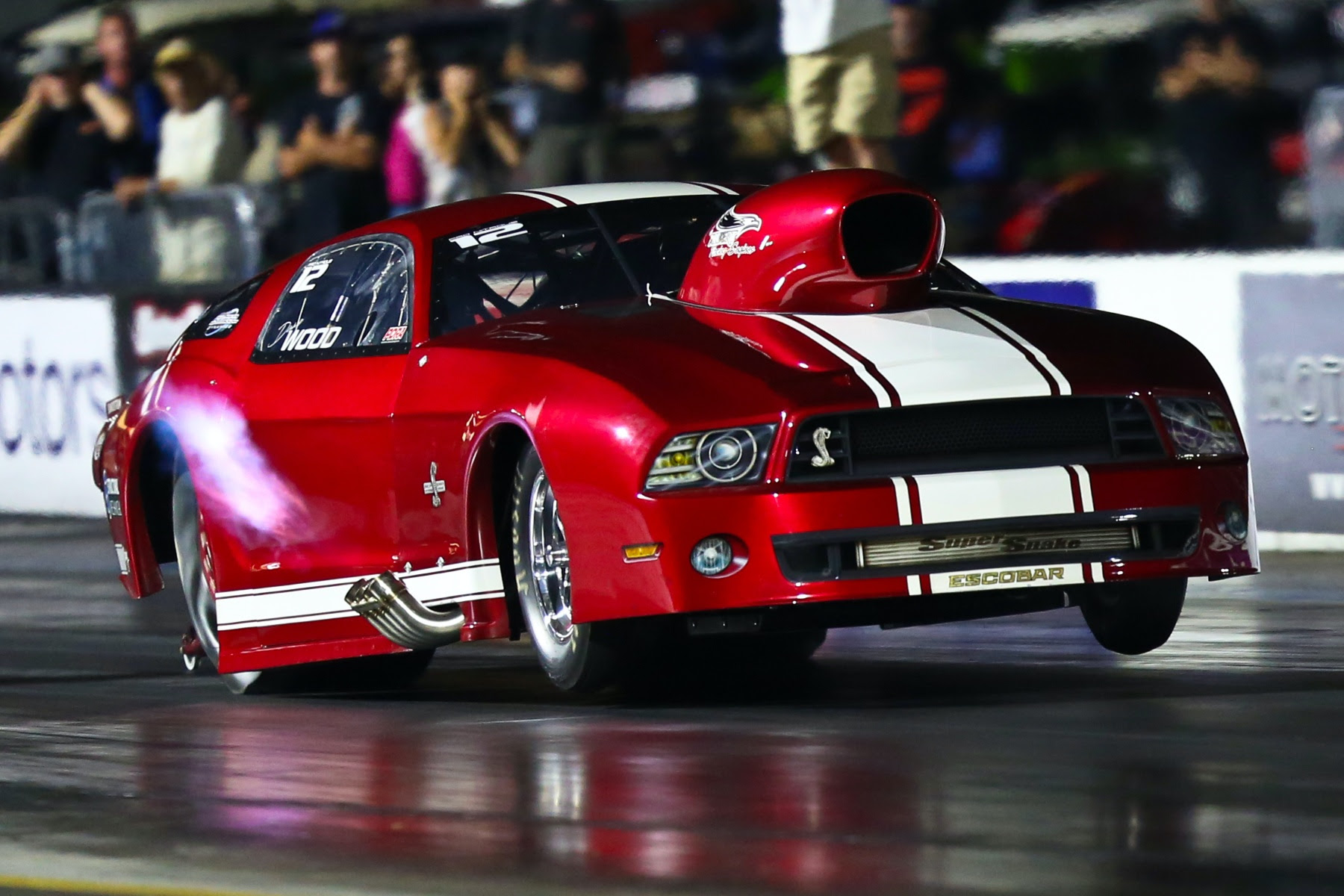 Dane Wood’s last appearance at VMP for the PDRA Drag 965 Summer Shootout presented by Classic Graphix two weeks ago saw the Chesapeake, Virginia-based racer make it to his first final round in Pro Nitrous competition. He lost in that final to first-time winner Chris Rini, but he bounced back with a final-round ProStars win. Driving his Albert-powered ’13 Mustang, Wood ran a 3.791 at 199.88 to knock off Ed “The Iron Man” Burnley, who slowed to a 4.077 at 145.19.

“We were just trying to keep the car consistent, as well as speed it up,” said Wood, who thanked his parents, wife Tiffany, his family and friends, BHM Racing, John Sundstrom, and engine builder Billy Albert. “The eight cars that were here are the baddest of the bad. You don't show up going, 'Well, I hope I qualify' or 'I hope I do good.' You come in expecting to run the best. We've had some lucky breaks, and we're just going to ride on it for right now. This means a lot. All my friends and family are here. It's a big deal.”

“I think [consistency] has been the upside to our program,” Wood said. “Even though we haven't been the fastest, we've been consistent, going down the track, hoping they make a mistake, and taking advantage of it.”

Burnley won his first-round match with defending ProStars champion Jim Halsey when the three-time world champion rolled the beams after staging, allowing Burnley to move on with a 5.701 at 85.47. The Pro Mod veteran then had a bye into the final, which he used to run low E.T. of eliminations, a 3.731 at 202.64, in his Musi-powered “Iron Man” ’69 Camaro. 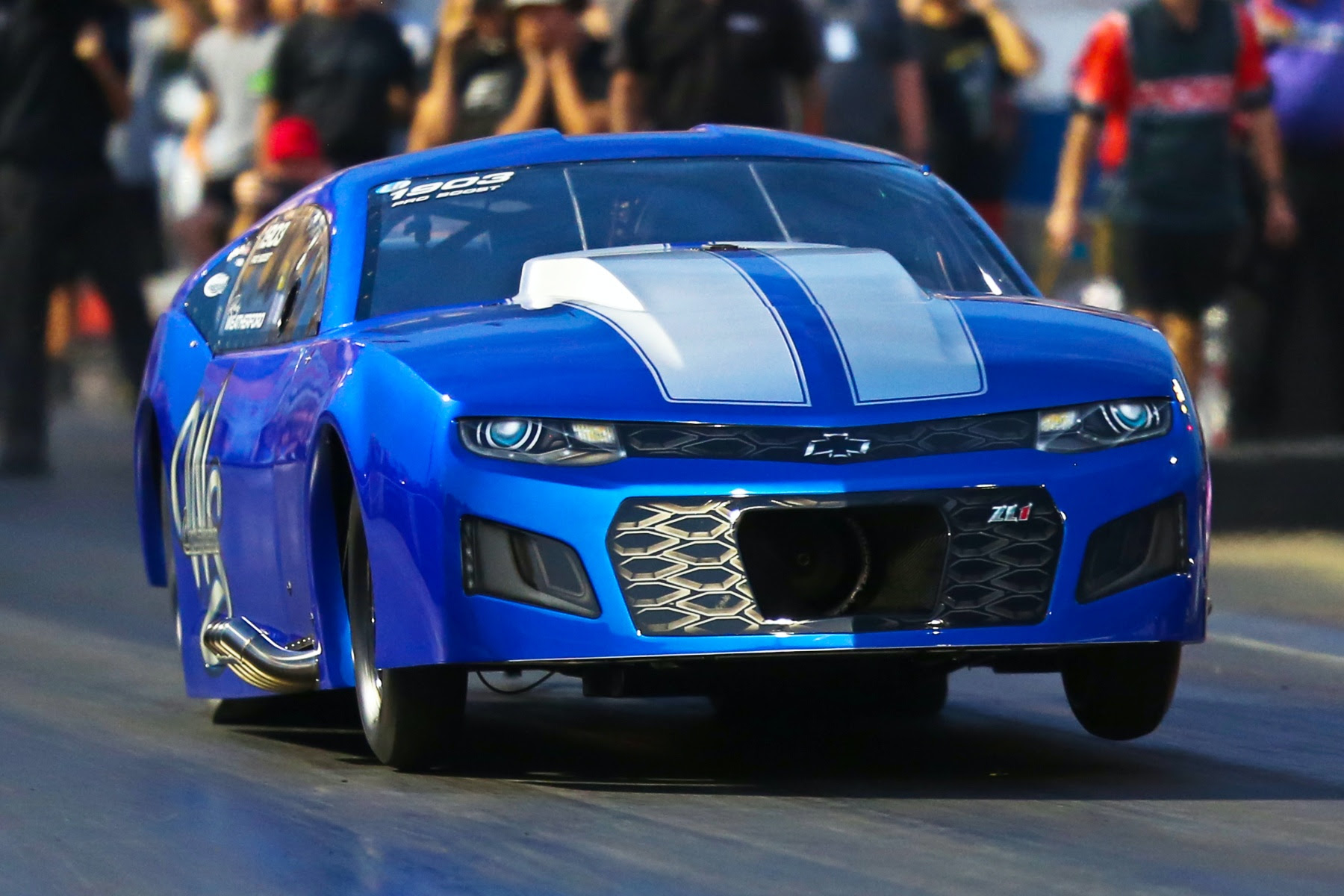 A Pro Mod veteran and a young gun squared off in the Pro Boost final, as former Pro Nitrous hitter Randy Weatherford lined up against Preston Tanner, who’s in his second year of Pro Boost competition. The two drivers cut identical .027 reaction times before Tanner pulled ahead. He lost power before reaching the finish line, though, while Weatherford and his ProCharger-boosted WS Construction ’19 Camaro charged on with a 3.675 at 199.73 over Tanner’s 4.053 at 129.78.

“We’re competing with some of the top stars out here,” said Weatherford, the owner of class sponsor WS Construction. “To bring this home means a lot to me, being in Virginia. This gives me a boost going forward, to be honest. We've been working on some new stuff on this car. We've got some of it that worked all right, but we burst a panel out of it again. But we brought home the win.”

“I've had some luck, but I've also had some talent in the car to do what I needed to do at the times I needed to do it,” Weatherford said. “Going forward, we have a pretty good hot rod and I feel comfortable in the seat. Let's go to the next race and see if we can win another one.”

Tanner started the day with a major victory over reigning world champion Kevin Rivenbark, who returned to the driver’s seat of the GALOT Motorsports ’69 Camaro for the special all-star race. Tanner set low E.T. of the round, a 3.681 at 204.66, over Rivenbark’s 3.744. With Jeff Pierce calling the shots, Tanner stepped up to a 3.663 at 203.92 to beat Robert Gallegos and his 6.116 in the semis. 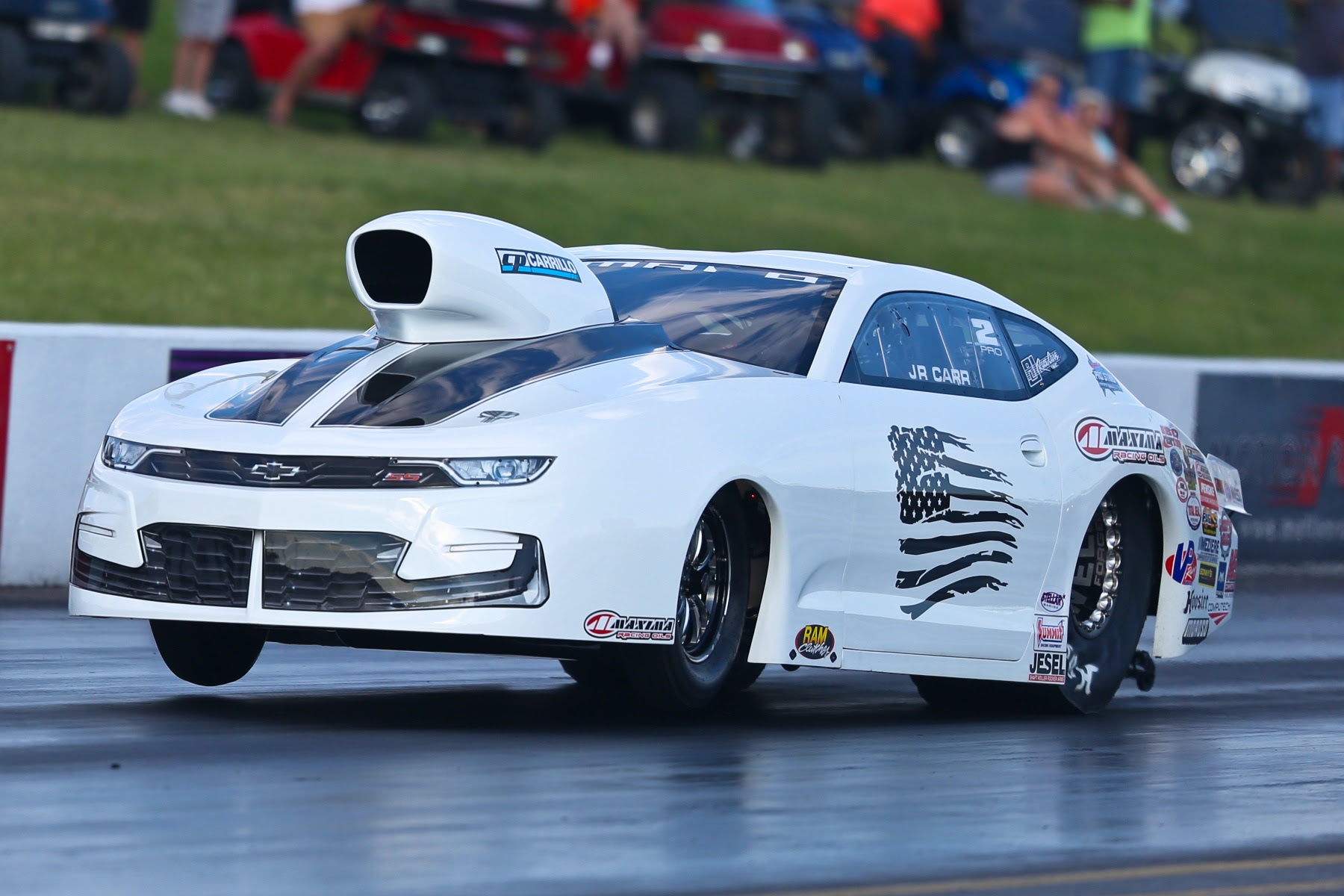 The final round in Extreme Pro Stock was a rematch of the 2021 final round, with JR Carr taking on 2020 world champion and defending ProStars champion Johnny Pluchino. This time, Carr was the one hoisting the trophy after posting a 4.061 in his Frank Gugliotta-tuned F5 Motorsports ’20 Camaro. Pluchino lifted to a 5.236 at 96.15 in the runner-up effort.

“I wanted this so bad,” Carr said. “Last year, I lost in the final round to Johnny. We evened out pretty nice. I'm happy. Everybody is tough here. I don't take anybody lightly, and anybody who thinks they can take anyone lightly here, they're going home. I'm just so proud of my team – Frank, Garry, Rich, Big, and my wife [Teri]. We're clicking. RJ Race Cars, CP Carrillo, Maxima Oil – they've been with us, they like us, and we had a good performing car today.”

“Thank you to Tyler [Crossnoe] and the Franklin family for working so hard to put this deal together,” Carr added. “The bands were awesome. It was just a phenomenal event, and it’s very appreciated by all the racers. Also, a special thanks to Summit Racing Equipment for their support of the race.”

Pluchino in his Kaase-powered $hameless Racing/Strutmasters ’13 Mustang kicked off race day with a 4.103 at 177.21 victory over Justin Kirk and his 4.159. He lined up against defending world champion Chris Powers in the semis, with both drivers pedaling and fighting to reach the finish line first. Pluchino won with a 4.50 over Powers’ 4.78. 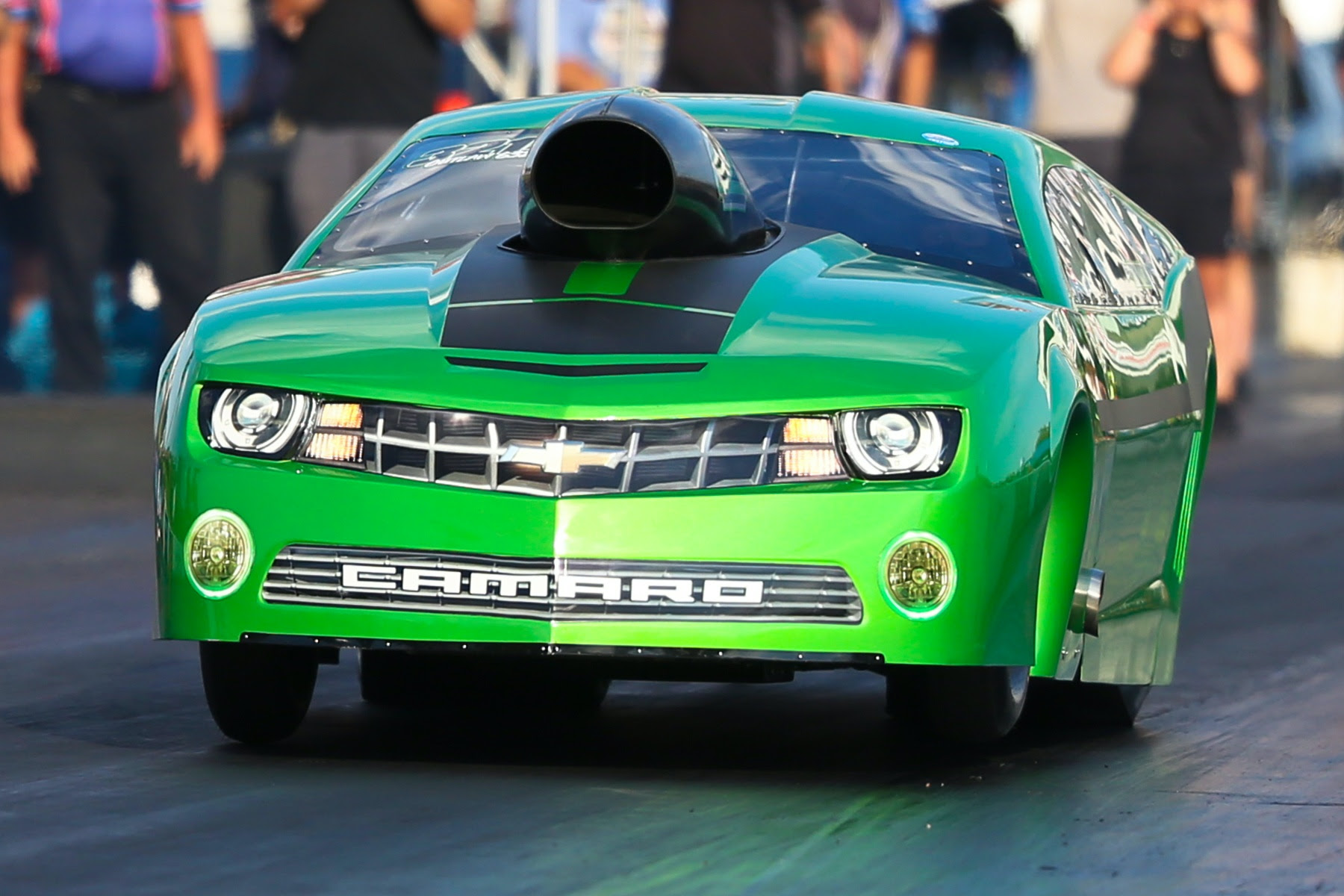 For the third time this season, best friends Amber Franklin and Lexi Tanner met up in the Pro 632 final round. Franklin defeated Tanner to earn her first-ever Pro 632 win at the Kentucky race, then Tanner beat Franklin to take her first win in the class at Maryland. At this special non-points event, Tanner added another win to her tally, using a holeshot advantage and a 4.241 at 164.55 in her Oakley-powered “Thunder” ’15 Camaro to beat Franklin and her 4.20 at 169.96.

“This win means so much to me,” said Tanner, who thanked parents Andy and Missy, brother Preston, crew member Chad Crawford, Jeff and Sam Pierce, Oakley Motorsports, and M&M Transmission. “When we started this season, we didn't realize we'd have the success we've had. Our main goal was just to qualify for this race. So to win it just shows how all the hard work has paid off, and it feels great.”

Tanner ran a 4.258 at 168.49 on a first-round single before stepping up to a 4.215 at 165.36 to beat the 4.229 of Walt Lannigan Jr., who was driving the Musi-powered $hameless Racing ’68 Camaro that Wes Distefano drove to victory at the 2021 ProStars race. By just a thousandth of a second, Tanner’s pass gave her lane choice for her final-round bout with Franklin.

“Even though it was the third time [racing Franklin in the final], that feeling never gets old,” Tanner said. “We’re super close. Before every race, we say, ‘OK, see you in the finals.’ It's the best feeling when that happens.”

TOP SPORTSMAN
The final round in Elite Top Sportsman was decided on the starting line when Jeremy Creasman went red by .140 in his ProCharger-boosted PAR Racing Engines ’12 Camaro. Meanwhile, past Top Sportsman world champion Chris “Nitrous” Nyerges charged to a 3.862 on a 3.83 dial-in driving the Buck-powered Schween Motorsports ’20 Corvette to claim the victory.

Championship contenders Joe Roubicek and Nick Meloni were the two drivers left standing in Top Sportsman. Meloni, the defending world champion, laid down a 4.591 on a 4.59 dial-in in his TT Motorsports ’69 Camaro, but a slight starting line advantage allowed Roubicek and his California-based ’68 Camaro to win with a 4.232 on a 4.22 dial-in.

TOP DRAGSTER
The top two drivers in Elite Top Dragster points, Larry Roberts and 2020 world champion Steve Furr, threw down in the final round. The two left with nearly identical reaction times, then Furr ran a 3.902 on a 3.89 dial-in in his ’13 American dragster to beat the 3.857 on a 3.83 dial-in from Roberts in his ’16 Racetech dragster.

Defending ProStars Top Dragster champion Stacy Hall picked up another win in his Fulton-powered ’21 American dragster. He used a .003 reaction time and a 4.364 on a 4.36 dial-in to beat Blake Denton’s 4.336 on a 4.33 dial-in, denying the Super 64 Super Pro Shootout winner a double-up victory in Tommy Franklin’s Musi-powered ’14 Chrome-Worx dragster.

The PDRA will return to its 2022 world championship schedule August 11-13 for the Summit Racing Equipment Northern Nationals presented by Penske Racing Shocks at Maple Grove Raceway near Reading, Pennsylvania.