The
Nostalgia Pro Comp Association returns for their third season of bringing
nostalgia racing to the Midwest.  The
NPCA has partnered with Goodguys for three of their four points meets. The
other being,The Muscle Car Reunion and Nostalgia Drags in Kansas City, MO.
Also on tap are some good old Saturday night match races at the new Muncie
Dragway and Route 66 Raceway. Full NPCA schedule for 2008 is as follows: 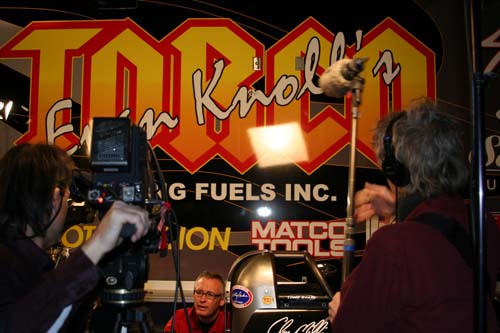 The images still flicker across the mind’s DVD.  A
Funny Car is nose first against the right guardrail, bouncing off the concrete
as the car makes its way down Englishtown Raceway Park’s 1320-foot racing
surface – and every inch of remaining asphalt before finally bouncing into the
trees. 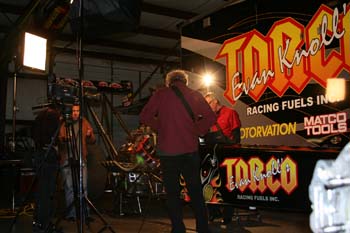 Johnny West would have had the best view of anyone in the
large crowd if he hadn’t been knocked out when his Banzai Chevy Beretta Funny
Car turned into a battering ram and whacked the wall not far from the starting
line in the final round.

Tuner
Donnie Bender came of age in 2007, and is now on the verge of making a
serious championship run with driver Larry Dixon, Jr. and the U.S.
Smokeless Tobacco Special.  Thanks to team owner Don “The Snake”
Prudhomme, the team has the tools with which to win.  Now it’s up to
them.

Bender had a teammate last year in tuner Mike Green and Funny Car
driver Tommy Johnson, Jr., but both are now with other operations.
Bender is not, however, going it alone because of the tuning
arrangement Prudhomme made with independent Funny Car racer Tim
Wilkerson.  Thus far the new arrangement is working well.

A
multitude of professional and sportsman racers will converge on South
Georgia Motorsports Park [SGMP], March 6 – 8, 2008, for the 9th annual
CSR Eastern Spring Test Nationals presented by Torco’s
CompetitionPlus.com. This traditional event has become a staple of high
performance which caters to a race-hungry southern Georgia drag racing
demographic. The event traditionally opened only one day for spectators
and attracted thousands of spectators.

The 2008 version of ESTN promises to be the largest ever. Instead of
fans being allowed entry only for the traditional “Chicago Style”
eliminations on Saturday, the gates will be open for Friday night
testing under the lights.

Tim
Wilkerson had an abysmal 2007 season, finishing a distant 15th in the
points and only making four semifinal round appearances in 23 races.
That’s all behind him now, and if his Winternationals performance is
any indication, this highly motivated and very popular independent
driver could be a serious contender this season.

Okay, so he lost in the first round at Pomona, just as he did last
year.  But, not only did he run harder this year, last year his season
went decidedly downhill after the Winternationals, but this year it
could be heading in the other direction.

“The (switch) to 90% is going to help us,” Wilkerson said.  “The parts
look a lot better, and thanks to NHRA for that.  That was a needed
change for this team, I can tell you that right now.”

Whether there are 9 - or 19 Top Doorslammers like there will be at Western
Sydney International Dragway this Friday and Saturday for the Summernationals,
one can always be rest assured that Ben and Victor Bray will be right in the
thick of it, in the world's fastest Sedan based vehicles.

Add an imposing
black Funny Car into the Top Alcohol mix, team Bray are ready to have at Sydney
in a big way this weekend!

"This will be the second outing at WSID for
ANDRA Top Doorslammer, and with only eight cars out of 19 going through to day 2
eliminations everyone will be trying to get a handle on the Sydney racing
surface early during qualifying," said Victor.

Thu, 2008-02-14 06:41
There's a belief that driving a Funny Car can be like riding a
bicycle. Frank Hawley proved just that by completing his Funny Car
licensing renewal.

During a
special test session Wednesday in Las Vegas, Hawley ran a 4.87 elapsed time with a
speed of 317 miles per hour. He made this run in the prototype Funny Car that
Mike Ashley drove in Pomona.

FORCE IN MOTORSPORTS HALL OF FAME OF AMERICA

Open-wheel racing champion Michael Andretti, NASCAR legend Buddy Baker and
perennial drag-racing king John Force will lead a class of seven racing greats
into the Motorsports Hall of Fame of America when the organization stages its
annual induction ceremony on Wednesday, August 13, 2008, at the Fillmore
Detroit.

"On land and in the sky, the Class
of 2008 represents race wins and championships in every series in America and
beyond," says Ron Watson, president of the Motorsports Hall of Fame of
America.

Wally Parks must be looking down, proud of the Museum that bears his name.  With
one of the most ambitious schedules of events and exhibits in its history, the
Wally Parks NHRA Motorsports Museum, presented by the Automobile Club of
Southern California, expands on its mission of preserving and protecting the
history of the performance car movement in Southern California. Among the
highlights during its 10th anniversary year are: