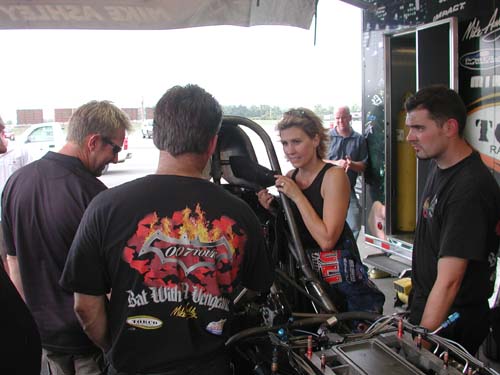 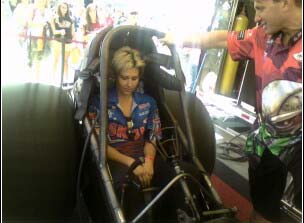 “I basically told Evan
last year if he’d give me the chance to own my own team that I’d build a solid
foundation for a first class winning organization,” Ashley said. “He gave me
that chance, and while we are far from perfect, we have had a good run of
success.”

Troxel will fulfill her
obligation as driver on the Vietnam Veterans/POW-MIA dragster for Morgan Lucas
by driving for the rest of the season. She will run a 23-race schedule in 2008.

Troxel has already begun
the crossover licensing process and hopes to complete the process soon.

“I went to about
half-track in testing last week, and it felt really good,” Troxel, whose
husband Tommy Johnson, Jr. also competes in the Funny car division. “I wanted
to be sure that the things I remembered from my Alcohol Funny Car days were
still the same, and the feeling was still the same.

Although as car owners, president and CEO of Lucas Oil Products,
Forrest Lucas and Executive vice-president and wife, Charlotte may not
have a dragster in the NHRA POWERade Countdown to the Championship, but
together they still celebrated a world championship Thursday night.

At the Lucas Oil reception held at the NFL’s Indianapolis Colts
compound, a distinguished tribute was bestowed upon them by Tom
Zupancic, Senior vice-president of Sales and Marketing of the Colts
organization, as they were presented with team Super Bowl rings as part
of the continued celebration of their victory over the Chicago Bears at
Super Bowl XLI in Miami back in February.  To say the Lucas’ were
delighted would be an understatement.

“It’s so much better than that,” said an ecstatic Lucas, who was almost
speechless after the presentation.  “Who in the world has a Super Bowl
ring?  The Colts have been very generous with us since we’ve entered
into our business relationship with them.  They have been good to us,
but to do something like that is just extremely special.  We are just
very, very honored.

Drivers from the NHRA and GM Racing made their annual stop at the world-renowned
James Whitcomb Riley Hospital for Children on Thursday. The GM Racing program
has made the yearly visit to Riley Hospital a part of its Mac Tools U.S.
Nationals weekend since 1999. It is the second time this season that a GM Racing
contingent of drivers has spread good cheer at a children's hospital in
conjunction with a locally held national event. Earlier this year, a group of
drivers made a visit to the Pediatric Specialty Clinic at Shands Hospital in
Gainesville, Fla., and later this fall a similar children's hospital visit is
planned for Las Vegas.

Signing autographs, and visiting with the kids and
their families on Thursday were Kurt Johnson, Melanie Troxel, Marty Ladwig, Greg
Anderson, Jason Line, Cory McClenathan and Hillary Will. 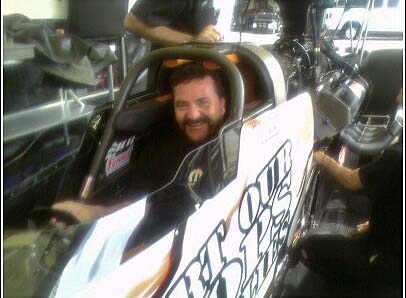 Some photos are just too good to caption. This one ought to fuel speculation.

A FITTING TRIBUTE TO A CHAMPION 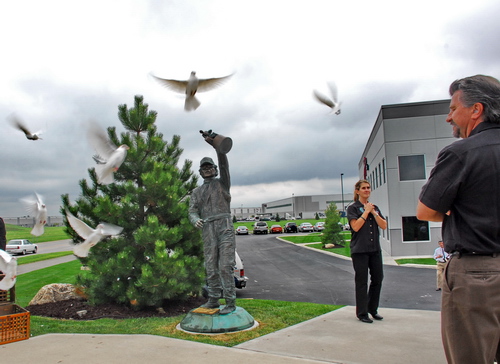 Very
few epitomized a peaceful spirit better than Eric Medlen and the
releasing of doves in honor of the Eric Medlen Project was a special
tribute.

As incredible as the plans for the Eric Medlen Project are, it was the bronze statue of Medlen's likeness that stole the show.

In creating The Eric Medlen Project (TEMP), Force said his goal was to
secure the legacy of its namesake, enhance race car safety in all forms of motor
racing and sustain the JFR racing dynasty, which has claimed 15 NHRA Funny Car
championships in the last 17 seasons.
“Our purpose is to show everyone that all of us at John Force Racing will
never forget Eric Medlen and the impact he had on us,” Force said of the young
driver he has called “the son I never had.”
To address safety and performance goals, Force ultimately wants to create
every race car component and perform every step of the preparation process
in-house.  That would include everything from building the engines and the
chassis for Funny Cars and dragsters to applying the paint.
“Don’t get me wrong,” Force said.  “I am still working with (chassis
builder) Murf McKinney, but one day we plan to evolve to doing everything
in-house because that’s the best way to maintain quality control.”
In addition, TEMP will contain the high-tech data acquisition and testing
equipment needed to support the JFR safety initiative.  Force again emphasized
that his team, led by Eric’s father, John Medlen, will share all the
safety-related data it develops with the NHRA and the PRO (Professional Racecar
Owners).
The elder Medlen, who was crew chief on his son’s Ford Mustang, is
relocating from Russellville, Ark., with his wife, Martha.  Hired in 1996 to
oversee the build-up of a second JFR Funny Car team, Medlen also will resume his
duties as crew chief on a Ford Mustang driven by rookie Mike Neff.

Rickie Smith and his Skull Gear Chevy Cobalt have been absent from the
NHRA circuit this year as Smith has been running on the IHRA's mountain
motor Pro Stock tour. Smith however, is looking to mix things up a bit
in the Pro Stock class this weekend at the Mac Tools U.S. Nationals.

“Tricky Rickie" is not only known for his superb driving skills, but
his incredible ability to make a racecar get down the track. As one of
the best tuners around, Smith is hoping to make the field this weekend
in Indy.

“Indy is the race that everyone wants to win,” Smith said. “We have
been racing in the IHRA this year, and ended up having this weekend
off, so I said what the heck. All the nuts and bolts have come together
over the last week, so we will see what we can do.”

The Eric Medlen Tribute Room at John Force Racing East in Brownsburg, Ind., will
be open to the public on Thursday, Aug. 30, from 4-6 p.m., Eastern time, to
accommodate fans attending the 53rd annual Mac Tools U.S. Nationals.  The room
features photographs, original artwork, collectible cars, Eric Medlen’s personal
memorabilia, trophies and other tributes from racers including Ron Capps, Tommy
Johnson Jr. and J.R. Todd.  One wall is devoted to banners signed by race fans,
another to Eric’s rodeo heritage and yet another to Eric and his dad, John
Medlen, who will oversee The Eric Medlen Project at John Force Racing, Inc.
John Force Racing East is located at 498 Southpoint Circle, facing Northfield
Drive.

IT'S OFFICIAL -- FORCE A HOTTIE 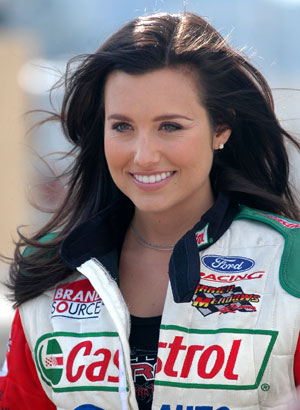 Force defeated IRL’s Danica Patrick en route to the
title. Voting continues through Monday, with the winner to be revealed
Wednesday.

The surprising part of
it all is that Force had no idea she was even in the contest.

“I actually
didn’t find out until I had already gone to the second round, and a girlfriend
of mine that I had grown up with, sent me a text and she said, ‘I voted for
you,’ and I didn’t know what she was talking about,” Force said. “And then a
couple of other people sent me phone messages and texts and finally I asked the
people at work – because we’re on the road a lot and I’m not able to get online
very often when we’re traveling – and they looked it up and they found out. It
was kind of a surprise.

“I didn’t know
that they were even doing the contest, so I had to get online and check out all
the different people that were in it – and I’m sponsored by Oakley and there
were a couple of other athletes sponsored by Oakley, so it was cool to be in
that contest with them. The fans at the races, once they caught on and were
hearing about it, they were pumped up as well to have a drag racer in the mix.”

The award-winning race team will
invest more than $3 million to locate its new 30,000 square-foot facility here
and will begin hiring engineers, technicians and logisticians later this
year.

“Motorsports has a rich history
and a bright future in Indiana," said Governor Mitch Daniels. "We'll continue to
encourage motorsports companies from across the country and around the globe to
locate and expand here as we build Indiana's reputation as the motorsports
capital of the world.” 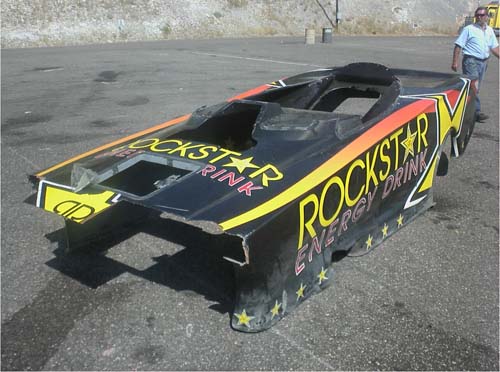 Following the
NHRA Mopar Mile-High Nationals, Jerry Toliver claims to have left a damaged body (complete
with titanium bracing) for a trucking company to pick up and transport for
repair.

Members of
Warren Johnson’s crew reportedly mistook the body for abandoned and began to
dissect parts of the body, removing the titanium and cutting off the nose and
roof sections.

When notified
of the incident, Toliver immediately contacted local law enforcement
authorities. He was then informed that members of Warren Johnson’s crew had
done the damage to the Toyota Solara body.