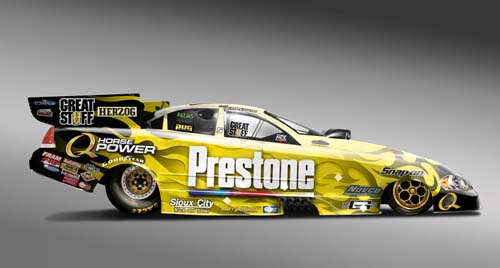 Tony Pedregon returns to Infineon
Raceway with a new, stylish Prestone paint scheme. “We are excited to have Tony
and the entire team representing Prestone and Bendix at this event,” said Jeff
Bye, Vice President of Prestone. “Tony has also signed on as our spokesperson
for our Hispanic marketing effort for the Fram, Prestone and Autolite brands, so
this tie-in lines up with our new alliance.”
“It is exciting to partner with
Prestone and Bendix,” said Pedregon. “I have 12 years of history with this
company and this is a great opportunity for me to promote Prestone, the number
one antifreeze/coolant on the market. A new paint scheme will certainly create a
lot of excitement for the race fans and there is no better place to showcase the
new car than at this event. This was a joint effort that became a reality with
our primary sponsor Q Horsepower as they understand the value of good partners
and great products.”

Torco's CompetitionPlus.com obtained this cell phone photo of the
remnants of Jerry Toliver's ROCKSTAR Toyota. As you can see the Toyota
Solara body was slightly modified.

If you're wondering what the latest surge at Cagnazzi Racing is, try cleaner parts in the engine.

"Pro Stock is the most competitive form of
racing on the planet," Owner Victor Cagnazzi said. "We can win or lose a race
by less than a thousandth of a second, so any advantage we can get on the
track, or back in the shop is important to the team. The Ultrasonic Cleaning
System gives us one of those advantages."

Melvyn Record of Infineon Raceway had a
front row view of the action, sitting in the cockpit of the Snap-on Tools
dragster as Herbert and the Snap-on crew brought the 7,000 horsepower racing
machine to life.

As Herbert hit the throttle, members of
the local media and several fans were taken aback by the sheer power and noise
created by the powerful nitro-burning engine.

As those watching took in the excitement
of hearing and seeing a Top Fuel dragster in person, Dr. Doug Brittsan, of
Brittsan CPT, measured the movement of the earth with a mobile
seismograph.

Mitch Marlowe owner of Marlowe Racing is putting up his entire race program for
sale at the end of the 2007 Screamin’ Eagle Nitro Harley AHDRA season.

UPDATED: SCHUMACHER – “NEFF WILL BE ANOTHER CREW CHIEF” 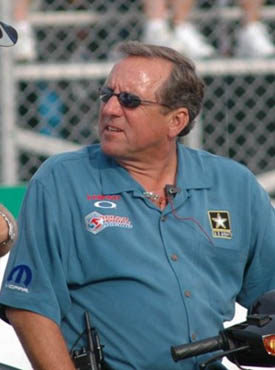 Not
only is Don Schumacher seeking a replacement for the non-retiring,
sabbatical-taking Gary Scelzi for next year, but he’ll be seeking a crew chief
as well. Schumacher confirmed that Mike “Zippy” Neff will leave the team at the
end of the year to drive a fourth Funny Car for John Force Racing.

“Mike
Neff informed me Saturday morning in Seattle that he is going over to John
Force Racing next year and drive the fourth Funny Car,” Schumacher said.

Schumacher
said the move came as no real surprise to him. He said that it had been
discussed prior to Neff’s decision to leave but felt it was a non-issue. In
Seattle, it became an issue again.

“Mike
had talked to me about it about a month or so ago,” Schumacher said. “He
committed to me in Denver on Thursday and Friday that everything was fine and
that he’s staying with me. We shook hands and a commitment was in place. He
told me that he was not going over there and that was that.

“Then
on Friday in Seattle we talked and John Force had been working him, working
him, and working him about driving a race car there [JFR Racing] and that was
the chance of a lifetime.”

FULLER WITH CAT IN SONOMA

Current NHRA Top Fuel points leader Rod Fuller
will pilot the yellow-and-black Peterson CAT dragster during the 19th running of
the FRAM-Autolite Nationals. David Powers Motorsports and San Leandro,
Calif.-based Peterson CAT have partnered for the FRAM-Autolite Nationals, July
27-29, at Infineon Raceway in Sonoma, it was announced today. This is the
fifth time that David Powers Motorsports and a Caterpillar dealer group have
joined to back Fuller’s car.

The
relationship between David Powers Motorsports and the CAT dealer groups is
designed as a pilot program to increase technician recruiting. Caterpillar
dealers are experiencing a shortage of technicians and NHRA drag racing offers a
technician-rich recruiting environment to find qualified candidates with
experienced mechanical backgrounds. Peterson
Holding is the parent company to Peterson Tractor Co., Peterson Machinery Co.
and Peterson Power Systems. Peterson has 19 locations in Northern California and
Southern and Central Oregon and employs more than 1,000
people.

“It’s awesome to again fly the yellow-and-black of
Caterpillar,” Fuller said. “Two weeks ago at Denver, we put our Wagner CAT car in the
winner’s circle. Our goal is to bookend the Western Swing with wins for the CAT
dragster.”

The 2007 NHRA POWERade Drag Racing Series
Awards Ceremony will be held at the historic Westin Bonaventure Hotel
and Suites, an architectural icon of the Los Angeles city skyline, Monday, Nov. 5.

The NHRA POWERade Drag Racing Series Awards Ceremony will feature a
pre-event cocktail reception, a formal sit-down banquet, and an after
party.

“After three years in the desert, we felt the move to downtown Los
Angeles provides a convenient yet electrifying atmosphere for the
year-end celebration to crown our NHRA POWERade World Champions,” said Tom Compton, president, NHRA.  This
is the inaugural year of the NHRA POWERade Countdown to the
Championship, a playoff-style format to determine the POWERade World
Champions in each of the four professional categories.

COUNTDOWN TO THE CHAMPIONSHIP CLEARER

Tue, 2007-07-24 17:22
With now just three races left in the 17-race regular season portion of the
POWERade Series’ new Countdown to the Championship, Sunday Raceday has taken on
a whole new and far more dramatic complexion.
Every single pair that goes down the track now on Sunday seems to have some
bearing on the playoff picture, whether it’s a driver at the top end securing a
playoff spot or one in the middle desperately seeking one.
That was certainly evident this past weekend at Pacific Raceways in Seattle
where three more drivers clinched playoff berths and two moved inside the
cutline … at least for now.
The two who moved inside the Top 8 in their respective category this week
were none other than the two winningest drivers in the history of the NHRA
POWERade Series: Funny Car’s John Force (123 career wins) and Pro Stock’s Warren
Johnson (96 career wins).

JOHN FORCE - "Sonoma will be tough"

It seems like only yesterday that John Force and Eric Medlen were
playing cowboy with two-time PRCA champion Jerold Camarillo on his
ranch just outside Oakdale, Calif., Medlen's hometown.

It seems like only yesterday the two were floating in the pool at a Bay
Area spa for an episode of the hit A&E Network TV series, Driving
Force.

And it seems like only yesterday Force was celebrating with Medlen in
the winners' circle at Infineon Raceway, site of the 20th annual
FRAM/Autolite Nationals, where, in a perfect world, his young protégé
this week would have been defending his Funny Car championship.

But, as Force so often has been reminded the last four months, the
world is not perfect and Medlen, one of the brightest young stars of
the NHRA POWERade Drag Racing Series, is gone now, his light
extinguished in a freak accident during testing last March at
Gainesville, Fla.