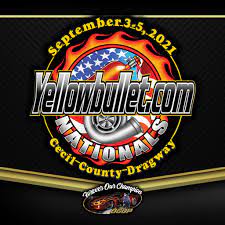 Thanks to our coverage partners at DragStory.com and Mark Walter, we present to you the live video feed from the 12th Annual Yellow Bullet Nationals

When it started 12 years ago, no one thought it would last this long or grow to be one of the premier heads-up events in the wild world of of drag racing. With 7 classes ranging from Pro Mod to 8.50 index, there is a class for every drag racing enthusiast to identify with.

Storytellers, the popular drag racing videos telling of days gone by, returns with another episode; this one told by iconic Blue Max crewman "Waterbed" Fred Miller.

In this video, Waterbed tells the story of racing with Bill Doner when things went terribly wrong for the colorful promoter. As those will attest back in the day, it was all fun and games until the tower got burned down. And from what we hear this was a regular occurrence at the drag strip in Eugene, Oregon.

We've got. a couple of versions of the stories from Eugene, so sit back as the legends of the sport spin their yarns.

CLASSIC VIDEO - THE EARLY DAYS OF THE BIG BUD SHOOTOUT The Big Bud Shootout started the ball rolling for the race-within-a-race events in 1982. With the support of Budweiser, the NHRA's Funny Cars accumulated points during the season based on qualifying, and on the grand stage of the NHRA U.S. Nationals in Indianapolis, battled it out in a shootout staged on Sunday for a $25,000 grand prize. The purse eventually doubled to $50,000.

The specialty event would last for ten years before Budweiser stepped away from the program. We have been in our video archives and found the first five years of the program for your entertainment.

Some call these years - 1982 through 1986 - the glory days in drag racing. This video is a reminder of the aura Funny Car projected back then. You'll see all the big names and even a few up and comers. Capps wants to know how Torrence is handling life as a father, and how it's changed him. He also wants to know how his team has managed to stay in championship form for some years now. They cover. a lot of ground, but there's still more to go in the future.

There's always enlightening tidbits revealed, so tune in to see what gets revealed in this episode.
​

STORYTELLERS WITH ED MCCULLOCH - YOU WEREN'T SH***** ME! Storytellers, the popular drag racing videos telling of days gone by, returns with another episode; this one told by Ed "The Ace" McCulloch.

In this video, Ace tells the story of the day a disagreement with the late "240 Gordie" led to unintended consequences. The legendary Scrapper never made a threat he couldn't back up. However, one time he made a threat he never intended to follow through on. There was a time when the IHRA was a bona fide threat to the NHRA's throne as the leader in drag racing. Thank Winston for the help in leveling the playing field with it's huge points fund.

While NHRA largely ruled the roost, the IHRA Winston Drag Racing Series provided professional drag racers with an opportunity to pick up extra racing time on "off" weekends, and because there was a large purse and points fund, it became a serious venture.

This time, the IHRA's ten-race tour rolled into Edgewater Motorsports Park, located just outside of Cincinnati, Ohio, for an honest to goodness showdown between the top professionals. NHRA had dropped Top Fuel in 1984, putting more prestige into the Funny car division.

This was one of the first broadcasts on ESPN, which IHRA had become a regular feature long before NHRA migrated over, and the storyline was on two drivers who had amassed quite a record of four-straight wins - Dale Pulde and Bruce Allen. This is the probably rarest video find of NHRA Championship Drag Racing history.