"With our in
house chassis fabrication department it is important to have the best welding
equipment in the industry," Dan Pikarsky, Team marketing Manager said. "Our Chassis department takes pride in the workmanship
as well as the craftsmanship on each race car chassis we build. We don’t have an
assembly line operation here at Cagnazzi Racing, we hand fabricate each part of
our race cars in house. When it comes time to secure the pieces with smooth
welds and proper heating for maximum strength and safety we choose Miller
Welders. " 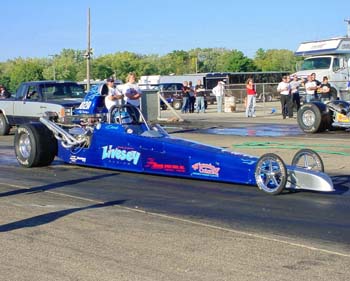 As the twentieth season draws to a close for the Midwest Super Comp
Series, with one race left remaining, Dave Livesey clinched the 2007
championship. Livesey led the points standings from the first of the
season by winning four of the first five races.

Connie Swingle, one of the true pioneers of drag racing, passed away Sept. 29, peacefully in his home in ,
the city of his birth. He was 72. Swingle had health problems for the
last 10 years and finally succumbed to cancer. His faithful nurse,
Virginia, was at his side.

After serving in the Air Force in the late 1950s, he moved to ,
and arrived at Garlits Automotive Inc. in 1960 and began welding and
became one of the best welders in the world. Don Garlits' Swamp Rat
III-A had been started, so “Swingle,” as he liked to be called,
finished the project and took the new chrome moly car on tour. Swingle
won many races with the car, the biggest being the Hot Rod Drags at
Riverside Raceway in 1962.

Swingle was instrumental in the success of the Garlits chassis
business from 1961 through 1964, at which time Garlits relocated to , , a suburb of .

Swingle went west and joined up with the
“Old Master,” Ed Pink. Driving Pink's AA/FD, Swingle enjoyed his
biggest win at Fontana Dragstrip in the fall of 1965, when he beat
Garlits in the final for the Mickey Thompson 200 mph Meet and took home
all the gold, about $10,000, a very large purse for that era.

Tue, 2007-10-02 20:44
Ed "Ace" McCulloch will be the Grand Marshall at the 16th annual California
Hot Rod Reunion October 12 through 14 at the AAA Auto Club Raceway in
Bakersfield, California. A special reception will take place on that Friday
night at 7pm in a huge suite at the Double Tree Hotel. At 9 pm, just outside of
the hotel, a special fire-up by the Ace will take place in the 1965
Northwind fuel dragster.
This car started Ed's storied career in the sport when he drove it to beat "Sneaky" Pete Robinson for the #1 spot
in the nation back then. The car was found in Canada by Jack Coonrod and with a
group of 40 people, over a 16 month period, rebuilt the car to give "Ace" "one
day in the sun" after his long bout with cancer.

At this weekend’s, Oct. 5-7, annual running of the Torco Racing Fuels NHRA
Nationals at the Virginia Motorsports Park in Richmond, Va., Doug Kalitta,
driver of the 330-mph, “Big Red” Mac Tools Top Fuel dragster, is looking forward
to seeing “329” next to his name Sunday, and not necessarily in the illumination
of the light bulbs of the finish line scoreboard at VMR.

At the previous event in Dallas, Kalitta reached the 325-round win milestone
in the Top Fuel class, drag racing’s quickest and fastest racing division. He is
hoping to add four more to that total this weekend and pick up a long overdue
win for him and his Mac Tools team in the 2007 POWERade Drag Racing Series.

Terry McMillen, driver of the Foley/Lewis Torco Nitro Top Fuel Dragster
backed by Evan Knoll, will make his NHRA debut this week at the Torco
Race Fuels NHRA Nationals October 5-7. The race held at Virginia
Motorsports Park is one that McMillen has been looking forward to all
year long.

"We circled these dates on our calendar right away," McMillen said.
"Evan Knoll does so much for drag racing and this is one of the many
events that he sponsors, so we wanted to be here to support him and to
gets some Top Fuel NHRA experience."
"I'm lucky enough to work along side of Evan at Torco," McMillen
continued. "He's really a great guy to work with. When it comes to
racing, no one does it better. He gives us the best tools to work with
and now this opportunity to race with the best of the best. It's pretty
exciting."

Brand was racing this
weekend in , when the severe weather hit his Co-Line
Manufacturing business sending sheet metal flying and damaging walls. Debris
from the accident reportedly wrapped around nearby homes.

No one was in the building
or at home when the storm hit and no injuries were reported.

Brand has made a
triumphant return to the IHRA Funny Car class in qualifying No. 1 during the
last two events.

Torco's CompetitionPlus.com has tried unsuccessful to reach Brand for comment.

When the sixth pair of
cars in the first session establishes a provisional world record, then you know
you’re in for a special weekend. That should be quite an accomplishment in
itself – but it was a forgotten memory by the time Sunday rolled around at the
IHRA Torco Race Fuels President’s Cup Nationals hosted by Maryland International
Raceway at Budds Creek, Md.

In fact, this scenario
would be repeated eight more times before the weekend was complete.

Nevermind the
record-setting aspect of the weekend, there were legends in attendance and a
ton of money [$50,000 in purse for eight cars, thanks to Torco Race Fuels] on
the line during the course of the weekend. But indeed, Saturday night (and
afternoon) was made for fighting.

Second-generation racer
Cary Goforth fired the first shot by cranking out a 222.88 mile per hour speed
but Brian Gahm soon overshadowed his mark as he recorded a 223.06 trap speed
just three pairs later. 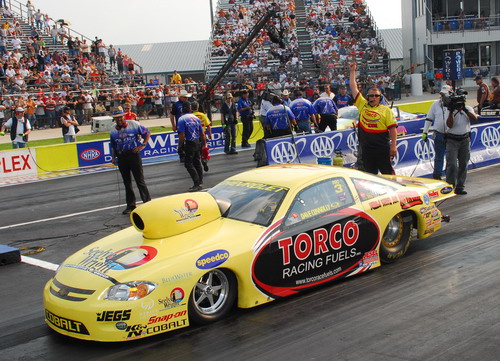 Dave
Connolly knew from an early age where he wanted to go in life. He
reached it during the second portion of the three phase NHRA Countdown
to the Championship format -- the leading Pro Stock driver in the
country.

Connolly
learned from an early age that drag racing would be an integral part of
his life growing up. He often went to drag races with his dad, Ray
Connolly, a Sportsman racer. It didn't take long to realize that Dave
wanted to follow in dad’s tire tracks.

Dave, 24, drove Super Comp cars like his dad but took the big step to
NHRA Pro Stock competition in 2003.  And, in his fourth full season of
professional racing, Dave currently is the category’s hottest guy in
the POWERade Series championship race.  He brings an impressive
four-race win streak with him to Virginia Motorsports Park, in nearby
Dinwiddie, for his car owner/sponsor Evan Knoll’s Torco Racing Fuels
Nationals.

WANT TO DRIVE A JET CAR?

Interested in driving a
300 MPH Jet Dragster? Hanna Motorsports has an opportunity for you.

Current driver Jessie
Harris will vacate the seat of the BIC Lighter Queen of Diamonds dragster at
the end of the year. Prior to Harris, Jessica Willard and Aggie Hendricks were
drivers.

“We are officially on the
hunt to discover the next BIC Lighter ‘Queen of Diamonds," team owner
and longtime jet racer Al Hanna said.  “We
have chosen to contact major tracks, and ask for input in terms of a young
woman who they feel dreams of having a career in professional drag racing.