It’s the latest craze on the outskirts of drag racing’s
radar screen. Various car enthusiasts are lining up for the 100-foot drags.

BE A CREWMAN FOR A DAY

Paul Fink Motorsports recently
signed Right Trailers, Inc. of , a distributor of Vintage
race car trailers and United Specialties motorhomes, to a major sponsorship for
the balance of the 2007 racing season with options for the entire 2008 season
and beyond.

CORY MAC - "READY TO BE SPOILER" 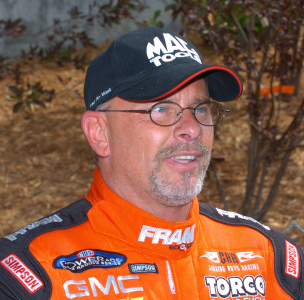 He’s always been a realist, so Cory McClenathan recognizes that it would take a
virtual miracle for him to pile up enough points during this weekend’s Toyo
Tires Nationals to move into the top eight in Top Fuel points.

It is the
17th, and last, event in the opening phase of NHRA’s Countdown to the
Championship. Sunday evening at Maple Grove Raceway, the door officially shuts
on the 2007 title aspirations of drivers below eighth place.

“It comes
down to our FRAM dragster winning the race or going to the finals and having the
two drivers ahead of us and a couple behind us have bad weekends before we have
a good chance of getting in,” said McClenathan.  “But it’s not in my mind set to
make the top eight, especially with the changes we’ve gone through in the last
two weeks.

“We’d like to be in the points deal, but realistically, what
we are shooting for is to run as good as we can and go testing at Indianapolis
(O’Reilly Raceway Park) next week so we can get ready for the last six races,
including the Mac Tools U.S. Nationals at Indy (Aug. 31-Sept. 3), and begin
preparing for the 2008 season.”

McClenathan was pleased with the
performance of his new team in its first appearance at Brainerd, Minn., last
week.

When the IHRA launched their mountain motor concept of Pro
Stock during the 1977 Winter Nationals at Darlington, South Carolina, Harold
Denton was not sold on the long-term success of the plan. Thirty years later,
he said it was one of the things that helped propel his drag racing career.

Denton will be the first to admit that he never expected the format to catch
on.
“I really didn’t,” Denton said. “It just seemed like a backyard kind of thing,
like sandlot baseball. I never believed it would turn into what it is. It was a
time for the country boys to shine.”

Denton, now retired from driving, etched his name in the history books by
winning that very first mountain motor Pro Stock event. Fourteen years later he
would return to the same track to achieve another milestone, becoming the
first-ever Pro Stock driver into the six-second zone while driving Jim Ruth’s
Party Time Pontiac.

The
Mike Neff – Don Schumacher – John Force Racing Scenario has all the makings of
a good soap opera. Sources indicate the arrangement between Neff and
Schumacher, with the veteran tuner now serving in an advisory role, may not
make it beyond this weekend’s event at Reading, Pennsylvania.

Schumacher
had revised Neff’s status from that of crew chief on Gary Scelzi’s Dodge
Charger to
an advisory role prior to last weekend’s event at Brainerd, Minnesota. This
precautionary move was reportedly made to ensure that co-crew chiefs Todd
Okuhara and Phil Shuler could adequately handle the added responsibilities of
tuning for both Scelzi and his teammate Jack Beckman.

A
semifinal finish by Scelzi and several strong runs by both cars put the writing
on the wall for Neff.

“I
really need to talk to Don to see what we are going to do from this point on,”
Neff said. “Don has been really good to me throughout this whole thing. There’s
no animosity between us. I just don’t see it working through the season.”

Series administrators of the AMS Pro Mod Challenge presented by Tindle
Enterprises, Inc. announced, today, several rule changes in the turbo-powered
entries to enhance competitive performance based on results from performance to
date. Changes are effective immediately, and are under continued scrutiny of the
Series to maintain competitiveness between the different power
plants.

Clutch: Up to
three-disk clutch permitted 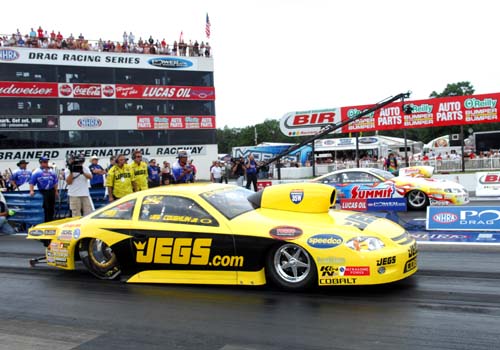 NHRA Pro Stock drivers Jeg Coughlin Jr. and Greg Anderson are both
coming off milestone victories in the series' two most-recent races as
they prepare for this weekend's 23rd annual Toyo Tires NHRA Nationals
at Maple Grove Raceway. Just one race after Anderson drove his Summit
Racing Pontiac GTO to his 50th career Pro Stock win at Sonoma (Calif.)
on July 29 Coughlin drove his JEGS.com Chevy Cobalt to his 50th career
NHRA national-event win at Brainerd (Minn.) on Aug. 12. Fittingly,
Coughlin defeated Anderson in the final round at Brainerd, his 37th
NHRA Pro Stock win to go with his 13 Sportsman victories in four
different classes. Only 11 racers have now reached the prestigious
50-win plateau in NHRA history including legendary names like John
Force, Warren Johnson, Bob Glidden, Kenny Bernstein and Joe Amato,
among others.

"As a result of their hard work and dedication, Greg Anderson and Jeg
Coughlin Jr. have reached a milestone that only a few drivers in the
history of NHRA have achieved, and we congratulate them both on this
tremendous accomplishment," said Fred Simmonds, GM's drag racing
marketing manager. "NHRA championship drag racing has been around for
56 years, and has nearly 80,000 members, so when two GM drivers become
only the 10th and 11th drivers in NHRA history to get 50 career wins,
it speaks volumes about their abilities and winning attitudes. Everyone
at Chevrolet and Pontiac are very proud of what these two drivers and
their teams have accomplished, and we wish them continued success as
they prepare for the Countdown to the Championship."

The 37-year-old Coughlin spent most of the 2006 season away from Pro
Stock competition before joining Victor Cagnazzi Racing and returning
for the season's last three races. The 2000 and 2002 NHRA POWERade Pro
Stock champion now has 37 Pro Stock wins and 13 Sportsman victories,
winning seven times in Super Stock, four times in Super Gas, and one
time each in Competition Eliminator and Top Dragster.

MIKE EDWARDS “I WANT TO BE OUT THERE”

Pro Stock competitor Mike
Edwards said he did the best thing he knew to do to fix his DNQ situation – he
stayed home. The 15-time NHRA national event winner and driver of the Young
Life Pontiac has been MIA on the tour since the rescheduled Bristol event.

Fans of Edwards can
breathe a sigh of relief. He hasn’t quit. He’s just sorting through his
problems by testing. Once he’s done, he’ll return.

“Maybe Reading, but Indy
for sure,” Edwards said. “We are just struggling in the engine department.
We’re not competitive, so what’s the sense in going to the races if you can’t
qualify? I just don’t see the need in wasting the effort and the money it
takes. I want to feel that I have a halfway chance. I really want to be back
out there.”

Edwards has been testing
at Tulsa International Raceway, but the extreme temperatures gripping much of
the country in the last month have limited his efforts. Lately, he has limited
his testing to the early morning hours.

“We’ve made a little
headway, but we’re not sure if that is what it takes to qualify,” Edwards said.
“We’re just going to keep working at it.”

Current NHRA Top Fuel point leader Rod Fuller will pilot the
yellow-and-black Ransome CAT dragster during the 23rd running of the
Toyo Tires Nationals. David Powers Motorsports and Bensalem, Pa.-based
Ransome CAT have partnered for the Reading, Pa. event, Aug. 16-19, at
Maple Grove Raceway near Reading, it was announced today. This is the
sixth time that David Powers Motorsports and a Caterpillar dealer group
have joined to back Fuller’s car this season.

“I’m back in black,” Fuller joked. “I’m excited because Ransome CAT was
instrumental in getting the talks started with Caterpillar. To
represent Ransome and Caterpillar is exciting. I’m going to one of my
favorite tracks on tour, Maple Grove. It’s the home race for my clutch
guy Shafty (David Karcanes) and he’s really excited too. We can secure
the No. 1 spot in the Countdown and that’s what we plan on doing.”