Kasey Coler, the NHRA’s vice-president of track management and operations, wasn’t about to guess when drag racing would get the green light to resume. And he was non-committal about how likely Gainesville Raceway, which he oversees, is to get the Gatornationals completed by its June 5-7 date on the revised schedule.

He said, “The health and safety of our fans in the communities that we visit for each race weekend has been and will continue to be our No. 1 priority. We’re working with great care and extensive input from local, state and national health officials and government authorities in hopes of hosting a safe race weekend for our fans, competitors and staff. The fluidity of the environment is one that we’d never want to speculate on, because ultimately, the decision might be out of our control for the currently scheduled weekend, or any date that might serve as a back-up.”

BOBBY BENNETT: GO AHEAD AND THINK YOU'RE INVINCIBLE

The problem with many drag racers is the unfounded belief they are invincible.

This sense of invincibility is not on the drag strip where they rightfully respect the race cars they drive.

The sense of invincibility is off the strip.

Coronavirus, COVID-19 ... that's the stuff which happens to other people.

Mr. Bennett’s “Welcome to the Participation Trophy Era” treatise was spot-on – and there are many topics with which I strongly disagree with Mr. Bennett.

NHRA’s hastily altered plans for the Countdown are as transparent as a plate glass window – and there was no need to cheapen qualifying for a chance to run for the championships in the manner in which they did.

Just one of the things they seem to have ignored is how the most exciting aspects of recent U.S. Nationals has been the frantic maneuvering by numerous competitors as they sought to move from eleventh or twelve into one of those treasured Top 10 spots. Those battles not only spiced up the action for the fans in the seats, it helped attract additional media coverage for both the event and the NHRA itself. In point of fact, NHRA often touted those very back-of-the-list points battles as just one more reason for the fans to attend.

The NHRA’s decision to revamp the Countdown to Championship has many scratching their heads, including me.

It’s not hard to see what NHRA is hoping to achieve; they want to inspire more participation and competition amongst the teams they expect to follow them along a not always financially feasible 24-race schedule.

As many people and I see it, Glendora doesn’t want a part-timer to manipulate the system to be in contention for the championship. If this were NFL football, imagine if a team forfeited three games in the 17-week schedule, and still made the playoffs, it would make a mockery of the playoff system.

In no particular order, here are some wishes for the new year in NHRA drag racing:

COMMENTARY: TORRENCE-FERRE SKIRMISH IS WHAT IT IS

Be careful what you ask for because you might just get it. NHRA got what it wanted Sunday, unfortunately in a controversial incident, which, in turn, has left them with a decision to make.

Drag racing’s social media sphere reacted in shock on Sunday as then championship contender Steve Torrence took an open palm and pushed Cameron Ferre in the face to the point his head flew back like a Pez dispenser. It was not a punch; it was a shove. However, in legal terms, the shove would be viewed as assault, an arrestable offense. To put things in perspective, grabbing someone by the arm can also be viewed as assault. 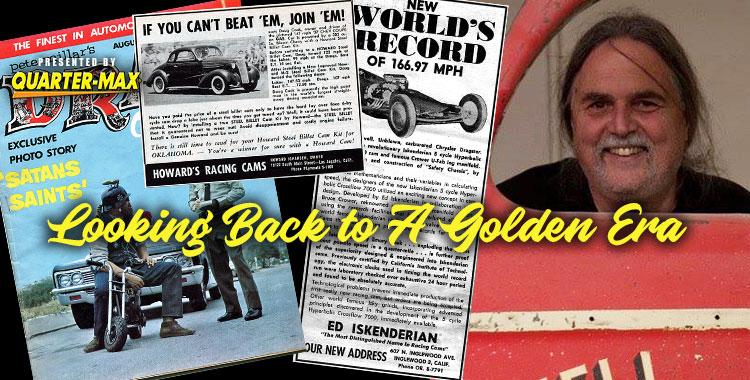 Forty-four years after his public battle with Fenn, Parks still wouldn't spill the beans—as evidenced by his curt rejection of a reporter's 2005 request for comment. One thing that Wally did divulge around the time of this letter was the inspiration for his longtime e-ddress. "No, no, it's got nothing to do with my last name!" he corrected a former Drag News editor during a California Hot Rod Reunion autograph session. Parks then asked for the writer's notebook, uncapped a fine-point Sharpie kept handy for signing, and slowly printed out the letters P-A-R-K-S-W-E-N-G-A-R-D. "Still don't see it?" he asked, smiling wickedly. "Try it backwards." (Readers, you do the math.)

​You should have seen it.

The line to get an autograph went on forever. Hordes of people hoping to snap a quick selfie, heck just to see John Force. It was like waiting backstage at a rock concert.

After all, this was the U.S. Nationals. The granddaddy of them all. The Big Go. And just a few feet from them, standing on the other side of a brightly colored rope, stood immortality. The ageless wonder. A man that 300 mph smashes, concussions, broken bones and God himself can’t seem to unseat.

And Force went on doing his thing. A rock star this sport never has – and may never – see again.

COMMENTARY: THE KISS WAS A MISS 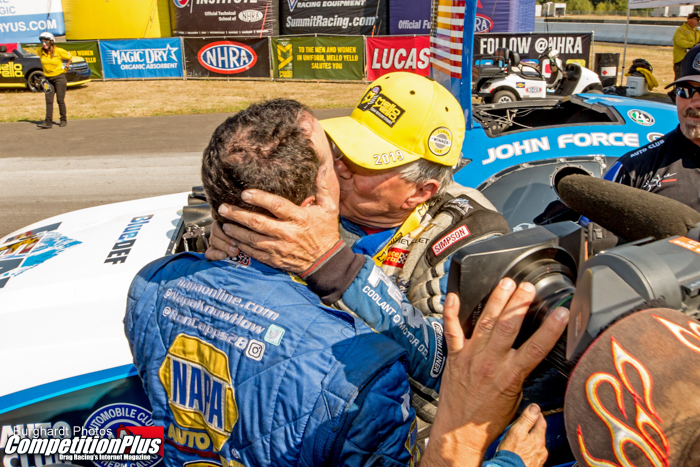 Six days after capturing his 150th win in a Funny Car, John Force was busier then a bumblebee shaking hands, signing autographs, taking pictures and accepting accolades at Summit Motorsports Park just outside of Norwalk, Ohio.

He also took a few minutes to apologize to Ron Capps for the post-race lip-to-lip kiss.