The Pro Modified Racing Association Presented by Torco Racing Fuels
Ontario is pleased to once again have the support of Gulfway Insurance.

“The PMRA is a great series, and we’re pleased to be able to contribute
to its growth,” stated Gulfway’s Mel Eaves. “Pro Modified racing is
very popular and Gulfway is glad to be on board.”

Gulfway will be providing bonus money for Best Reaction Time and Round Winner at all 2008 PMRA events.

Eaves is no stranger to racing. Gulfway is a leader in specialized auto
insurance, focusing on motor racing. Eaves, who has competed in several
types of racing, knows and understands the issues when it comes to
insurance for the motorsport industry. His racing career spans several
decades of off-road racing, road racing, and, for the past several
years, drag racing. Starting in Super Gas, Eaves worked up to Top
Sportsman and Pro Modified, along with campaigning a Nitro Coupe from
his Florida base.

A source indicates that a conglomeration of companies spearheaded by
the leaders of Jegs Mail order are committed to keeping the NHRA Pro
Modified series intact for at least the 2008 season.

While Jegs
Mail Order's PR Director Scott Woodruff wouldn't confirm they have
taken the lead in the effort, he did say that his company loves the
entertainment value the class brings to the NHRA series. 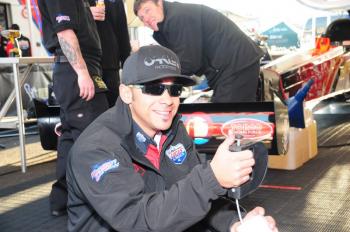 J.R. Todd has only raced Firebird
Raceway twice but to determine that it’s not at the top of his favorites list.
Thus far Todd has a DNQ and a first round loss to his credit during the NHRA Checker
Schuck’s Kragen Nationals.

Todd does see a silver
lining in this otherwise dark cloud – pre-season testing.

“Yeah, we haven’t had the
best luck at ,
but with our results from our preseason testing there, this year might have a different
outcome for us,” said the five-time NHRA Top Fuel winner.  “It’s kind of a tricky track with the way the
groove is laid out, so now I know what to expect once we get back there this
weekend.  It’s my new team with Morgan
Lucas Racing and based on the way we ran there in preseason testing, we stand a
good shot this weekend.”

SCELZI OPTIMISTIC ABOUT RETURN TO FIREBIRD 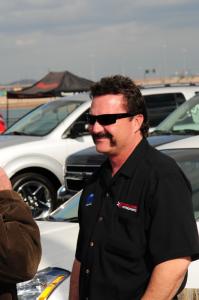 The last time Gary Scelzi made runs at Firebird Raceway, he left
with a less than confident feeling. Three weeks later, he's a changed
man. Credit a strong Pomona showing for his renewed enthusiasm.

"I'm really excited about going to Phoenix," said Scelzi, who landed in the
quarterfinals in Pomona and is tied in fifth place in the standings with three
other drivers. "I felt that we could have done damage in Pomona. It was
unfortunate that we broke a Heim joint (in his second round against John Force)
that is connected to the barrel valve. But it's one of those things; it's
something that just never breaks. So, we'll write that off as one that got
away.

Having already defied conventional wisdom simply by climbing back into
the cockpit of his 330 mile-an-hour Castrol GTX® High Mileage™ Ford
Mustang, John Force tries to take his remarkable comeback one step
further this weekend on a Firebird Raceway quarter mile on which he has
gone to the final round 10 times in the last 14 seasons, more often
than at any other track in the NHRA POWERade Series.

Although he still walks with a limp, the result of injuries suffered
Sept. 23rd in a spectacular and widely-documented crash in Dallas,
Texas, Force isn't merely a sentimental favorite in this week's 24th
annual Checker/Schuck's/Kragen Nationals.  He's the real thing: a
threat to extend to 22 the number of consecutive seasons in which he
has won at least one NHRA tour event.

A semifinalist two weeks ago in the season-opening race at Pomona,
Calif., one in which he posted the quickest race day time of 4.805
seconds, Force returns this week to the track where he first mashed the
gas on his reconfigured Funny Car during last month's pre-season test. 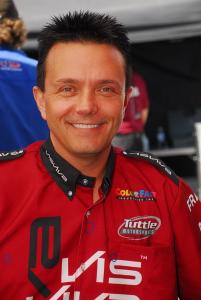 Maybe the sportswriter at the Del Rio, Texas, newspaper was being
facetious long ago when he typed the identification lines under the
photograph of a father and his son.

Alan Bradshaw was four years old at the time.  “I had my dad’s helmet
on my head and it was sitting on my shoulders,” Bradshaw says now.

Then again, maybe the sportswriter had an unobstructed view of the future. 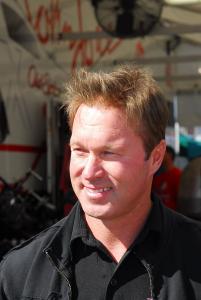 Rookie driver Mike Neff is entering the 24th annual Checker, Schuck’s,
Kragen NHRA Nationals, his second race of the 2008 POWERade season,
with more of the most valuable element any driver needs.

“I think we will be better. I know I’ll personally feel a little bit
better since we were able to make some full runs. We have more runs
with the Old Spice Mustang now after (Pomona). I feel good about it,”
Neff said. “I think we had a pretty good weekend despite the fact that
we went out first round. For everything that we have changed and the
minimal amount of test runs that we made to go to Pomona and qualify
not too far off the pace is impressive.” 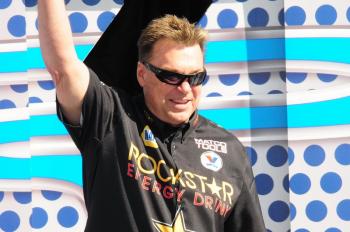 One year ago Rockstar Energy Drink Dodge Charger Funny Car driver Jerry Toliver
was sitting on the sidelines preparing his team to compete in what was left of
the 2007 NHRA POWERade Drag Racing Series. This year Toliver enters this
weekend's NHRA Nationals at Firebird Raceway No. 10 in the point standings
following one national event, with a very quick race car.

What a
difference a year makes. Tolliver is now in his first full season of NHRA
competition since 2004, after joining Don Schumacher Racing in
2008.

"Any time you walk away from a race in the top 10 is an
achievement," said Toliver, who posted the quickest Funny Car elapsed time of
the weekend, 4.790 seconds, at the season-opener in Pomona, Calif. "You can't
set your sights too high and you can't win them all and, unfortunately, we had a
parts failure in the clutch department that took us out in the first round.

BIG MONEY UP FOR GRABS IN IHRA SHOOTOUTS

The Pro Modified
Shootout, which is a point-based eight-car qualified field, will be run
off at the Torco Racing Fuels Northern Nationals held at Knoll Gas
Motorsports Park in Martin, Mich. in August. The Pro Stock Showdown,
with the same qualifying points structure, will be run off at the
Amalie North American Nationals in Epping Sept. 5-7.